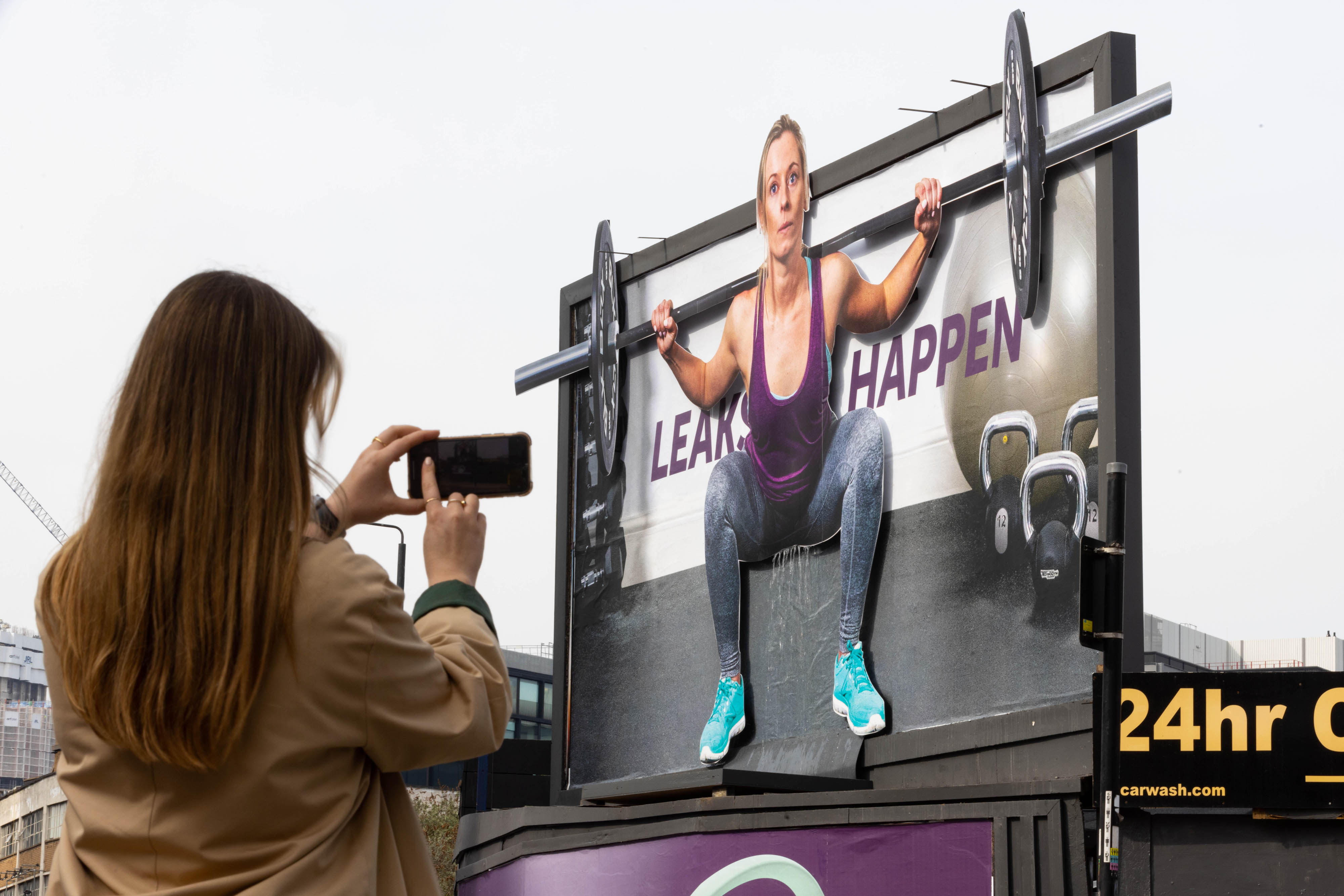 This week, Londoners can head near Liverpool Street to see a billboard first – a ‘peeing’ campaign.

Women’s health brand Elvie are behind the stunt, aiming to raise awareness of incontinence with their promotional poster depicting a woman squating and lifting weights while ‘peeing’ actual liquid.

Research from the brand reveals 84% of women in the UK suffer from mild or minor incontinence.

But only 7% seek medical help – despite the issue being easily improved with pelvic floor training.

On average, it takes women seven and a half years to address the condition.

There’s clearly still taboo around incontinence – and this billboard is designed to help get people talking.

Two weeks ago, TikTok banned a video published on Elvie’s profile, showing a woman leaking urine while weightlifting, as the platform deemed it ‘graphic’ content.

Women’s bodies and health issues have a history of being censored on social media, but there is no censoring with this billboard promoting the #LeaksHappen campaign.

The campaign has been inspired by experiences of women whose daily lives are interrupted by incontinence.

Megan Burns, 28, is featured in the billboard. The mum-of-two from Cornwall can be seen displaying a urinary leak while working out in the gym.

Megan started experiencing urinary leaks when she went on her first run, postpartum.

She said: ‘We have to break the stigma around incontinence because it can hold women back from doing the things they love.

‘I was determined to get back into running after having a baby.

‘I spoke to a physio about the leaks I was experiencing, and they told me to use a tampon to help strengthen my pelvic floor.

‘This was dangerous advice as you shouldn’t insert a tampon when you’re dry, and it was very uncomfortable.

‘As it stands, there’s so little education around incontinence and how to solve it. This needs to change.’

Incontinence can particularly affect women who do high-impact sports, like trampolining, gymnastics and running.

Despite this, 46% of women neglect to look after their pelvic floor health.

Almost a quarter who suffer say they feel disgusted with themselves, and 10% feel alienated.

Tania Boler, CEO and founder of Elvie, said: ‘Incontinence is often stigmatised but it’s something that affects women of all ages and stages; from many different walks of life, and the lack of education – even within the medical world – prevents women from understanding how to access the solutions they need.

‘Incontinence is common. Women need the right tools to solve the problem, so that incontinence doesn’t have to be endured.’

You can visit the billboard this week on Commercial Street/Quaker Street London E1 6BJ.

Top tips for implementing Kegel training into your everyday life

Studies show that correct and consistent pelvic floor training improves symptoms in up to 70% of cases, according to Elvie.