‘Painless’ Glucose Monitors: Do They Help Patients With Diabetes?

In the nation’s battle against the diabetes epidemic, the go-to weapon being aggressively promoted to patients is as small as a quarter and worn on the belly or arm.

A continuous glucose monitor holds a tiny sensor that’s inserted just under the skin, alleviating the need for patients to prick their fingers every day to check blood sugar. The monitor tracks glucose levels all the time, sends readings to patients’ cellphone and doctor, and alerts patients when readings are headed too high or too low.

Nearly 2 million people with diabetes wear the monitors today, twice the number in 2019, according to the investment firm Baird.

There’s little evidence continuous glucose monitoring (CGM) leads to better outcomes for most people with diabetes — the estimated 25 million U.S. patients with Type 2 disease who don’t inject insulin to regulate their blood sugar, health experts say. Still, manufacturers, as well as some physicians and insurers, say the devices help patients control their diabetes by providing near-instant feedback to change diet and exercise compared with once-a-day fingerstick tests. And they say that can reduce costly complications of the disease, such as heart attacks and strokes. 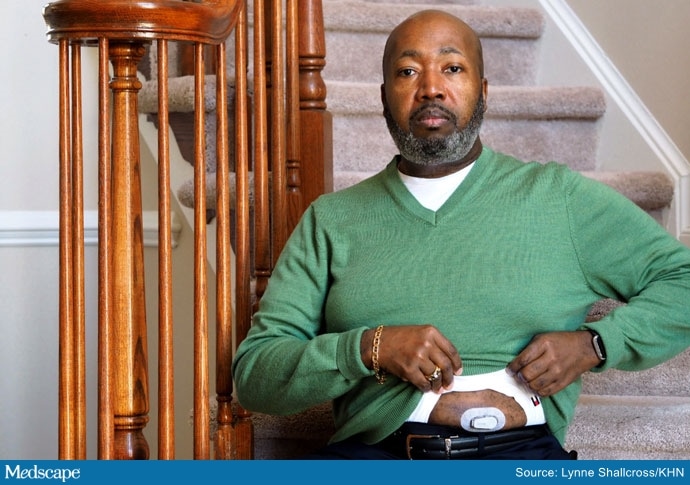 Trevis Hall, 53, of Fort Washington, Maryland, credits a continuous glucose monitor with helping him get his diabetes under control.

Continuous glucose monitors are not cost-effective for Type 2 diabetes patients who do not use insulin, said Dr. Silvio Inzucchi, director of the Yale Diabetes Center.

Sure, it’s easier to pop a device onto the arm once every two weeks than do multiple finger sticks, which cost less than a $1 a day, he said. But “the price point for these devices is not justifiable for routine use for the average person with Type 2 diabetes.”

Without insurance, the annual cost of using a continuous glucose monitor ranges from nearly $1,000 to $3,000.

People with Type I diabetes — who make no insulin — need the frequent data from the monitors in order to inject the proper dose of a synthetic version of the hormone, via a pump or syringe. Because insulin injections can cause life-threatening drops in their blood sugar, the devices also provide a warning to patients when this is happening, particularly helpful while sleeping.

People with Type 2 diabetes, a different disease, do make insulin to control the upswings after eating, but their bodies don’t respond as vigorously as people without the disease. About 20% of Type 2 patients still inject insulin because their bodies don’t make enough and oral medications can’t control their diabetes.

Doctors often recommend that diabetes patients test their glucose at home to track whether they are reaching treatment goals and learn how medications, diet, exercise and stress affect blood sugar levels.

The crucial blood test doctors use, however, to monitor diabetes for people with Type 2 disease is called hemoglobin A1c, which measures average blood glucose levels over long periods of time. Neither finger-prick tests nor glucose monitors look at A1c. They can’t since this test involves a larger amount of blood and must be done in a lab.

The continuous glucose monitors also don’t assess blood glucose. Instead they measure the interstitial glucose level, which is the sugar level found in the fluid between the cells.

Companies seem determined to sell the monitors to people with Type 2 diabetes — those who inject insulin and those who don’t — because it’s a market of more than 30 million people. In contrast, about 1.6 million people have Type 1 diabetes.

Helping to fuel the uptake in demand for the monitors has been a drop in prices. The Abbott FreeStyle Libre, one of the leading and lowest-priced brands, costs $70 for the device and about $75 a month for sensors, which must be replaced every two weeks.

Another factor has been the expansion in insurance coverage.

A small but growing number of insurers are beginning to cover the device for some Type 2 patients who don’t use insulin, including UnitedHealthcare and Maryland-based CareFirst BlueCross BlueShield. These insurers say they have seen initial success among members using the monitors along with health coaches to help keep their diabetes under control.

The few studies — mostly small and paid for by device-makers — examining the impact of the monitors on patient’s health show conflicting results in lowering hemoglobin A1c.

Still, Inzucchi said, the monitors have helped some of his patients who don’t require insulin — and don’t like to prick their fingers — change their diets and lower their glucose levels. Doctors said they’ve seen no proof that the readings get patients to make lasting changes in their diet and exercise routines. They said many patients who don’t use insulin may be better off taking a diabetes education class, joining a gym or seeing a nutritionist.

“I don’t see the extra value with CGM in this population with current evidence we have,” said Dr. Katrina Donahue, director of research at the University of North Carolina Department of Family Medicine. “I’m not sure if more technology is the right answer for most patients.”

Donahue was co-author of a landmark 2017 study in JAMA Internal Medicine that showed no benefit to lowering hemoglobin A1c after one year regularly checking glucose levels through finger-stick testing for people with Type 2 diabetes.

She presumes the measurements did little to change patients’ eating and exercise habits over the long term — which is probably also true of continuous glucose monitors.

“We need to be judicious how we use CGM,” said Veronica Brady, a certified diabetes educator at the University of Texas Health Science Center and spokesperson for the Association of Diabetes Care & Education Specialists. The monitors make sense if used for a few weeks when people are changing medications that can affect their blood sugar levels, she said, or for people who don’t have the dexterity to do finger-stick tests.

Yet, some patients like Trevis Hall credit the monitors for helping them get their disease under control.

Last year, Hall’s health plan, UnitedHealthcare, gave him a monitor at no cost as part of a program to help control his diabetes. He said it doesn’t hurt when he attaches the monitor to his belly twice a month.

The data showed Hall, 53, of Fort Washington, Maryland, that his glucose was reaching dangerous levels several times a day. “It was alarming at first,” he said of the alerts the device would send to his phone. 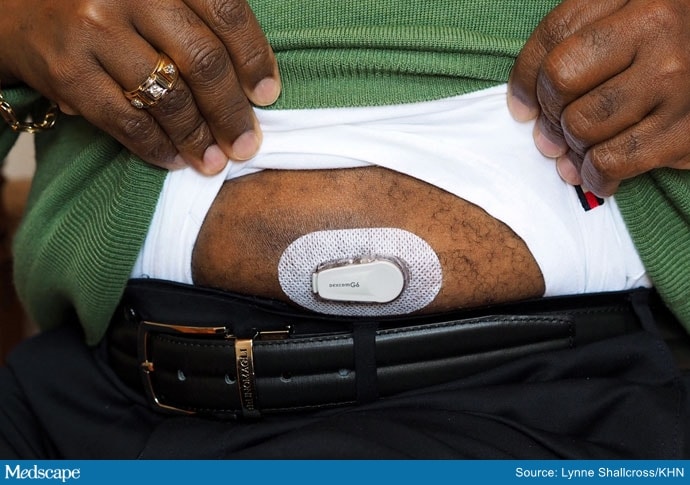 Trevis Hall’s insurer gave him a monitor last year at no cost as part of a program to help control his diabetes. He says it doesn’t hurt when he attaches the monitor to his belly twice a month.

Over months, the readings helped him change his diet and exercise routine to avert those spikes and bring the disease under control. These days, that means taking a brisk walk after a meal or having a vegetable with dinner.

“It’s made a big difference in my health,” said Hall.

This Market “Is Going to Explode”

Makers of the devices increasingly promote them as a way to motivate healthier eating and exercise.

The manufacturers spend millions of dollars pushing doctors to prescribe continuous glucose monitors, and they’re advertising directly to patients on the internet and in TV ads, including a spot starring singer Nick Jonas during this year’s Super Bowl.

Kevin Sayer, CEO of Dexcom, one of the leading makers of the monitors, told analysts last year that the noninsulin Type 2 market is the future. “I’m frequently told by our team that, when this market goes, it is going to explode. It’s not going to be small, and it’s not going to be slow,” he said.

“I believe, personally, at the right price with the right solution, patients will use it all the time,” he added.