One in seven women die of ovarian cancer within two months

Ovarian cancer postcode lottery laid bare: Shock audit shows women living in poorest parts of England are up to 50% more likely to die within 2 months of being diagnosed

The most deprived women in England are 50 per cent more likely to die of ovarian cancer within two months of being diagnosed than the richest, NHS data revealed today.

Overall, one in seven women lose their lives to the disease just two months after they are found to have it.

Poorer women may have lower survival rates because they have worse access to GPs who can spot their tell-tale symptoms, the report suggested.

Cancer charities condemned the ‘survival lottery’, adding: ‘It isn’t right that anyone’s survival depends on where they live.’

The findings come after a damning report ruled No10 is making inadequate progress on its targets for boosting cancer survival rates.

Experts advising the Health and Social Care Committee concluded the Government is failing to meet pledges to boost the NHS workforce, speed up diagnoses and give all patients access to personalised care. 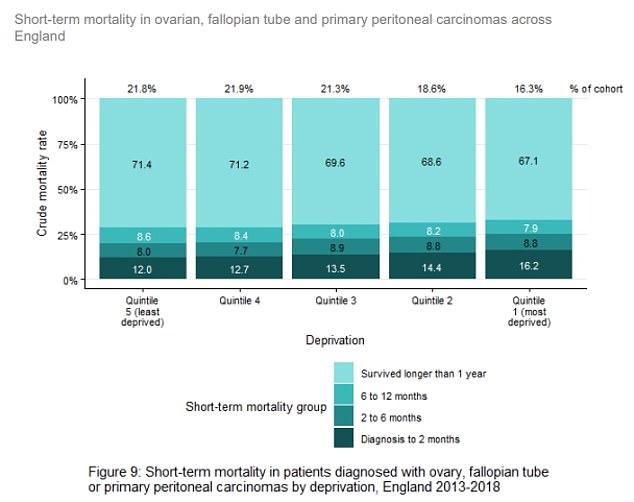 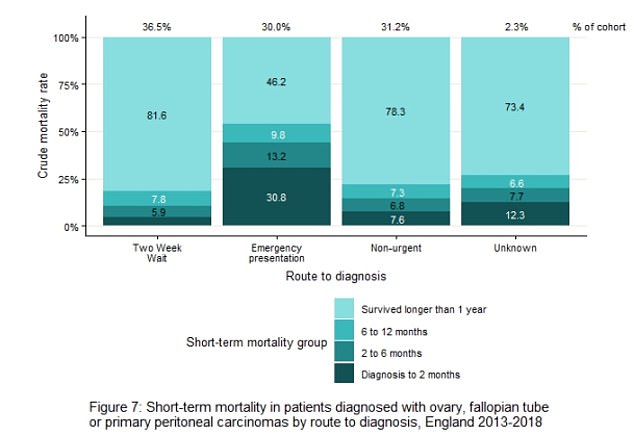 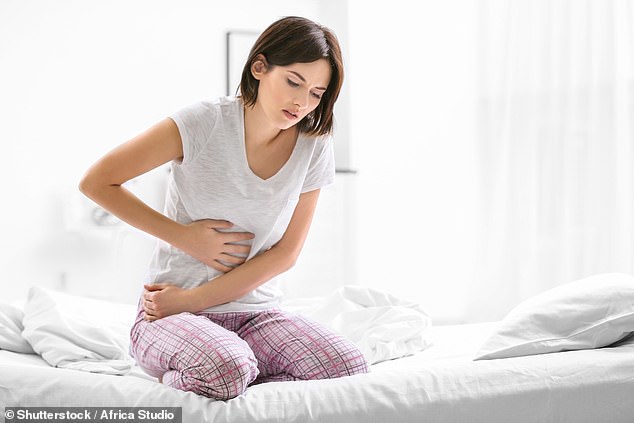 Britain is making ‘inadequate’ progress towards its fight to improve cancer services, a damning report by MPs concluded today.

Experts advising the Health and Social Care Committee examined pledges that the Government had made to improve cancer outcomes for patients.

They ruled the Government is failing to meet its targets to boost the NHS workforce, speed up diagnoses and give all patients access to personalised care.

Staffing issues were underpinning a lack of progress towards the vital goals, which include diagnosing patients who have been referred within 28 days.

‘It isn’t right that anyone’s survival depends on where they live, particularly when the evidence is in plain sight.

‘We can’t keep ignoring this and, working with the NHS, there is much more that can and should be done.’

The Ovarian Cancer Audit Feasibility Pilot studied outcomes in women with with ovary, fallopian tube and primary peritoneal carcinomas in England from 2013 to 2018.

It revealed women who are diagnosed through the emergency presentation route are four times more likely to die within two months.

Some 30.8 per cent of women who are diagnosed after seeking help for their symptoms at A&E die in that time frame.

The disease is likely to have spread too far to be treated effectively by that point, the report claimed.

In comparison, only 4.7 per cent of those seen by a GP and urgently referred to a specialist within two weeks — a system set up in 2000 with the aim of speeding up diagnoses — lost their lives within two months.

There are around 7,500 new ovarian cancer cases in the UK every year and it is often diagnosed in the late stages.

Alexandra Holden, deputy chief executive of Target Ovarian Cancer, said: ‘This report reveals the scandal of over 750 women dying within two months of being diagnosed with ovarian cancer every year.

‘We stand together to condemn this in the strongest of terms, and we must now speed up progress in awareness, diagnosis and care.

‘Today’s report shows us just how many lives are at stake if we do not take action now.’

Professor Sudha Sundar, president of the British Gynaecological Cancer Society, said: ‘We’ve made a lot of progress but this data shows we need to do more.

‘At the BGCS we’re committed to supporting the NHS to drive the best outcomes for everyone diagnosed with ovarian cancer.

‘It’s clear we have a long way to go and significant issues to tackle.’

WHAT ARE THE SYMPTOMS OF OVARIAN CANCER?

The symptoms of ovarian cancer can be difficult to recognise, particularly early on.

They’re often the same as symptoms of less serious conditions, such as irritable bowel syndrome (IBS) or pre-menstrual syndrome (PMS).

The most common symptoms of ovarian cancer are:

Other symptoms can include:

When to see your GP

See your GP if:

It’s unlikely you have cancer, but it’s best to check. Your GP can do some simple tests.