David Mzee broke his neck in 2010. He was a college student in Zurich at the time, an athlete who enjoyed risk and contact, and he flipped off a trampoline and onto a foam pad. “The foam pad, it didn’t do its job,” he said.

Mr. Mzee, now 33, is one of three men who lost the use of their legs years ago after severe spinal injuries, but who now are able to walk without any supports, if briefly and awkwardly, with the help of a pacemaker-like implant, scientists reported on Wednesday.

The breakthrough is the latest achievement in the scientific effort to understand and treat such life-changing injuries. Several recent studies have restored motion to paralyzed or partly paralyzed patients by applying continuous electrical stimulation to the spinal cord.

The new report, described in the journal Nature, is the first demonstration of so-called patterned stimulation: An implant sends bursts of targeted stimulation to the muscles that intend to move. In effect, the stimulation occurs on an as-needed basis, roughly mimicking the body’s own signaling mechanism.

The treatment is still experimental, and its effectiveness for others with complete or partial paralysis is yet to be worked out. The three men had some sensation in their legs before the trial began, and they needed months of intensive training to achieve their first awkward steps. They still rely on wheelchairs; two can walk out in the community, using walkers.

Each of them has learned to move previously limp muscles without help from the implant — an indication that the electrical stimulation prompted nerves to regrow.

“At first everything was new and, of course, exciting, but it took so much work to see any difference,” said Mr. Mzee. “I would go home after rehab, eat, then go straight to bed. Then it got easier to get the movement I wanted, and the biggest step for me was when I could move hands free, for the first time, on the treadmill. I wasn’t able to do that for so many years; it was a really cool feeling.”

Chet Moritz, a brain scientist at the University of Washington, who was not involved in the study, was impressed by the results.

“The exciting thing about these findings is that they hold out the promise that spinal cord injuries can be cured, to an extent that restores walking, and that many movements persist even when stimulation is turned off,” he said.

Other researchers cautioned that the study was small, and that the patients were only partly paralyzed. “We’re still a long way from people being able to access this as standard medical care,” said Dr. Kimberly Anderson, professor of physical medicine and rehabilitation at Case Western Reserve University School of Medicine, although she added that the approach had great potential.

In recent years, researchers have used brain implants — electrode chips, placed below the skull on the motor area of the cortex — to decode neural signals and restore movement in people and nonhuman primates who have lost the use of limbs. Still other scientists are investigating nerve growth factors, chemical compounds that are injected at the site of an injury to promote repair.

The authors of the new report, who are based at the Swiss Federal Institute of Technology, in Lausanne, previously had demonstrated that rats that had lost the use of their hind legs could be trained to run again when continuous current was applied through the spinal cord to the muscles. Other research teams recently have reported that continuous stimulation could also restore some movement in human patients.

But in people, continuous stimulation seems to send mixed signals to the muscles, activating some and confusing others, the authors of the new study argue in a companion paper in the current issue of Nature Neuroscience.

The three men in the new trial showed more rapid improvements than did most subjects in previous trials, but their injuries were also less severe.

“The key now will be to optimize this technology and the positions for the nerve connections,” said Gregoire Courtine, the senior author of the new report in Nature. “When you haven’t walked for many years, you have to learn to walk again.” 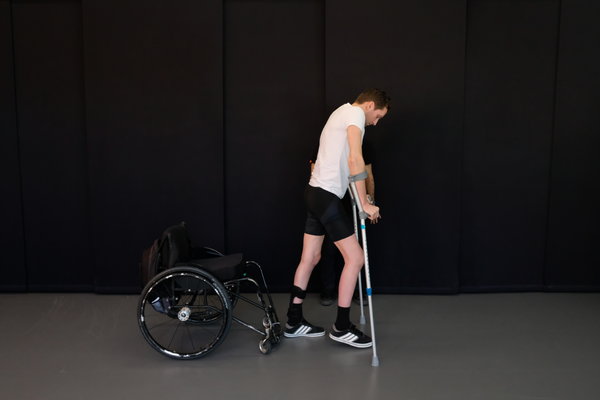 The treatment of the men began with surgery. Doctors implanted a small patch of electrodes on the surface of the spinal cord in the lower back, below where each injury had occurred. The patch was connected to a pacemaker device, which was placed in the abdomen.

The implanted device, when turned on, delivered bursts of stimulation to individual muscles as they were called into use. The intention to lift a knee generated a certain pattern of nerve firing; stepping forward generated a different one. In effect, the device provided the pattern of stimulation that the body delivered before the injury occurred. Over time — with intensive physical therapy, on a treadmill with hand supports — the stimulation appeared to engage the brain’s motor cortex through nerves that were spared from injury, Dr. Courtine said.

“In the animal studies, the reorganization in the brain was really massive,” Dr. Courtine said. “There were a lot of new connections from the motor cortex to brain stem.” The same would be expected in humans, he said.

After his injury, Mr. Mzee began playing wheelchair rugby, and soon made the national team. The injury also plunged him into research of his own; through a doctor, he learned of the program in Lausanne, and the animal experiments. When he heard that a human trial was in the works, he quickly enlisted.

“It’s really hard to say what’s coming next for me,” Mr. Mzee said. “I think the next step will have to be a huge one, and one of the problems is that I have to have some trunk control. My trunk is not well-balanced. I’m trying to set up a body support system at home to do more rehab but, you know, it’s expensive. I’m still not steady without those supports.”

Even so, rehab — the hard work, sweat and discipline that have proved so helpful for many patients — will be essential to the recovery process. “We’ve known for years that people” with partial paralysis can respond to rehabilitation, Dr. Anderson said. “The problem comes down to access; long-term rehabilitation in the chronic setting is not paid for by very many insurers. As a result, most people with motor incomplete injuries do not recover to their fullest potential.”