The Ohio House of Representatives this week passed one of the most restrictive abortion bills in the country — one that would penalize doctors for performing an abortion when a fetal heartbeat can be detected and pose a potential challenge to Roe v. Wade.

A fetal heartbeat can be detected by an ultrasound as early as six weeks into a pregnancy, a time during which most women are unaware they are pregnant.

Under the bill, approved Thursday by a vote of 60 to 35, performing an abortion on a fetus with a heartbeat would result in a fifth-degree felony, which is punishable in Ohio by up to one year in prison and a $2,500 fine. The bill now heads to the Ohio Senate.

The measure includes no exceptions for rape or incest. Doctors may, however, make an exception during a medical emergency or if an abortion would save a woman’s life.

Representative Christina Hagan, the lead sponsor of the bill, said in an interview on Friday that it was crafted specifically to challenge Roe v. Wade, the 45-year-old Supreme Court decision that made abortion a constitutional right.

“We believe Ohio is best positioned to send this through the Circuit Courts and to the federal Supreme Court,” said Ms. Hagan, a Republican who campaigned on behalf of President Trump.

She said she was “confident” the bill would become law by the end of the year. Both the House and the Senate have a Republican-dominated veto-proof majority.

In 2016, Gov. John Kasich vetoed a bill prohibiting abortions when a fetal heartbeat can be detected. “We did not have the strength in the majority to overcome that veto,” Ms. Hagan said, adding, “We do now.”

In his 2016 statement, Mr. Kasich said the bill was contrary to the Supreme Court’s rulings on abortion and pointed out that similar legislation in other states had been declared unconstitutional by federal judges.

Mr. Kasich did, however, sign a bill banning abortion after 20 weeks.

If the current bill does not reach the governor’s office until next year, it will land on the desk of his successor, Mike DeWine.

During a campaign debate, Mr. DeWine said he would support the legislation.

“I will sign the bill,” he said. “I believe that the essential function of government is to protect the most vulnerable members of society. That includes the unborn.” 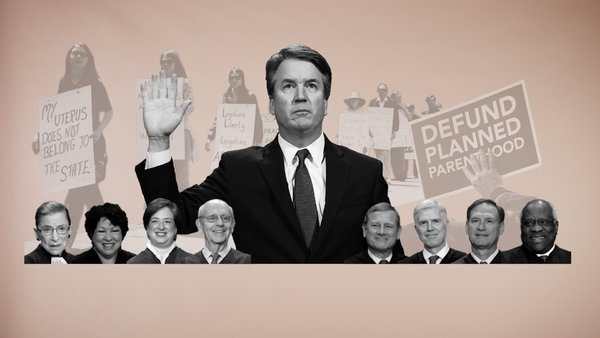 Will a new Supreme Court with two Trump-appointed justices overrule Roe v. Wade? It's possible, but not the most likely outcome. Adam Liptak, a New York Times reporter, explains.

But some doctors say that the decision to have an abortion is one that ought to be made among a woman, her family and her health care provider.

“Every situation truly is unique and every time I think that I’ve heard it all, I have a patient come in and just surprise me by the circumstances of her needing care,” said Dr. Sarah Horvath, a family planning fellow at the American College of Obstetricians and Gynecologists. The organization urged Ohio’s governor to veto the heartbeat legislation presented in 2016.

Fetal heartbeat legislation could prevent women from seeking an abortion before they even realize they are pregnant, she added.

“If they weren’t intending to become pregnant or taking pregnancy tests routinely, most would have no idea they’re pregnant at that point,” Dr. Horvath said.

The Ohio State Medical Association has pushed back against the bill and is “very concerned” about its plan to criminalize doctors for performing a medical procedure that could be considered a standard of care, said Reggie Fields, a spokesman for the organization.

According to Ms. Hagan, instituting penalties is necessary to prevent abortion providers from disregarding the law.

“If a murder is occurring, then there has to be a repercussion for that action,” she said.

In other states, like Iowa, similar bills have been signed into law.

Planned Parenthood and the American Civil Liberties Union filed a lawsuit challenging that law’s constitutionality, and a county judge granted a temporary injunction to block it from taking effect pending the litigation’s outcome.

North Dakota passed a “heartbeat bill” in 2013, but it was overturned by a federal judge.

Next year could bring additional challenges to abortion access.

“We fully anticipate when state legislatures come back in full swing in January 2019 that others will follow suit and introduce restrictive legislation, abortion bans and things of that nature,” Brigitte Amiri, deputy director of the American Civil Liberties Union’s Reproductive Freedom Project, said in an interview on Friday. “I think what happened yesterday should be a wake-up call on the direct attacks on Roe v. Wade.”

More than a dozen abortion cases are currently before federal appeals courts, any of which could reach the Supreme Court next year. Now that Justice Brett M. Kavanaugh has replaced Justice Anthony M. Kennedy, the court has a conservative majority. Abortion rights groups consider Justice Kavanaugh a threat to Roe v. Wade.

The Trump administration has already made moves to curb reproductive rights, including a regulation that would allow some employers to deny birth control coverage for moral or religious reasons.