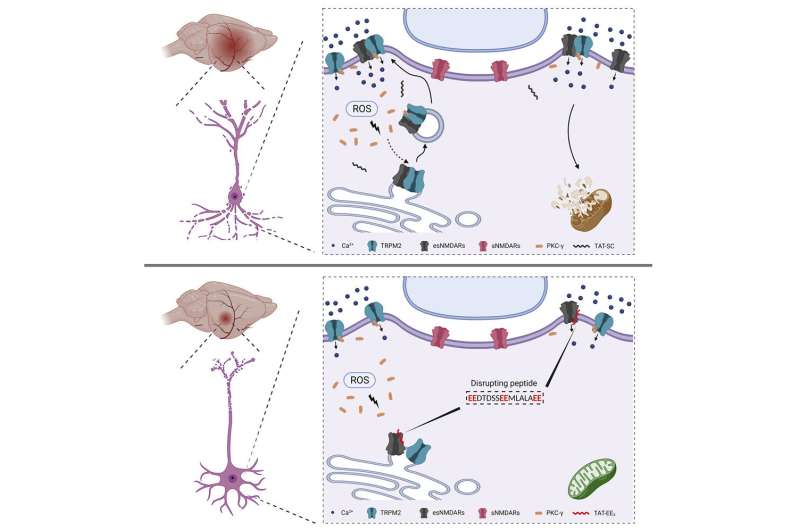 Stroke is a leading cause of disability and death in the U.S., with roughly 800,000 Americans suffering a stroke every year.

Despite the widespread impact of stroke, there is still a lack of effective treatment. Lixia Yue, associate professor of cell biology at UConn School of Medicine, has made a discovery that could change this.

Given its critical role in neuronal death during stroke, NMDA receptors have been a target for stroke treatments for 50 years without much success. These efforts have stalled because blocking this receptor has severe side effects.

Yue’s breakthrough discovery was that stroke damage occurs specifically when an ion channel called TRPM2 interacts with NMDA receptors under conditions of oxidative stress present during a stroke. She identified a short (16 amino acid long) sequence on TRPM2 that is responsible for the interaction that leads to neuronal death.

“The target we identified is very unique,” Yue says. “The mechanism is very specific.”

Yue’s work focused on ischemic stroke, which account for 85% of all strokes.

To test its efficacy, Pengyu Zong, a graduate student in Yue’s group, and the first author of the paper, conducted an in-vivo trial using mice, the findings of which were recently published in Neuron.

After inducing a stroke, Yue and her team injected the mice with a peptide two hours after the stroke. This time lag was designed to mimic the delay someone may have between a stroke and when they make it to a hospital and to allow enough neurons to die for them to make useful comparisons.

They continued the injections every 12 hours for seven days. This approach safely covers the potential impact of delayed neuronal death which tends to occur around three days following a stroke.

Yue’s peptide effectively blocked the interaction between NMDA receptors and TRPM2 after a stroke in the mouse models. Yue and her team saw greatly reduced brain injury from 37% to only 18–19% with the peptide injection.

The next steps for this technology will be to determine what the ideal dosage and timing between doses is. Yue says they will also look to evaluate how long after a stroke this treatment may be effective.

“When patients get to the hospital, sometimes it’s not that fast,” Yue says. “So, I think that’s a very important clinical question.”