NHS waiting list hits ANOTHER record high: Now 6.1MILLION are stuck in queues for routine ops like hip and knee replacements… including 310,000 who’ve been on the books for over a year

NHS waiting lists for routine operations have hit yet another record high of 6.1million in the first data released for 2022.

An additional 30,000 people were on the list for routine operations such as hip and knee replacements and cataract surgery compared to December.

The 6.1million figure is the largest since records began and 2million higher than when the pandemic hit in 2020 and effectively froze NHS elective treatments.

Ministers has come under increasing pressure to get a handle on the crisis with millions of Britons living in pain while waiting for their procedures.

The number of people waiting over a year to start treatment increased to 311,528 in January, up from 310,813 in December and 2 per cent higher than a year ago.

It comes after the Government and NHS England vowed to eliminate all waits of more than a year by March 2025. 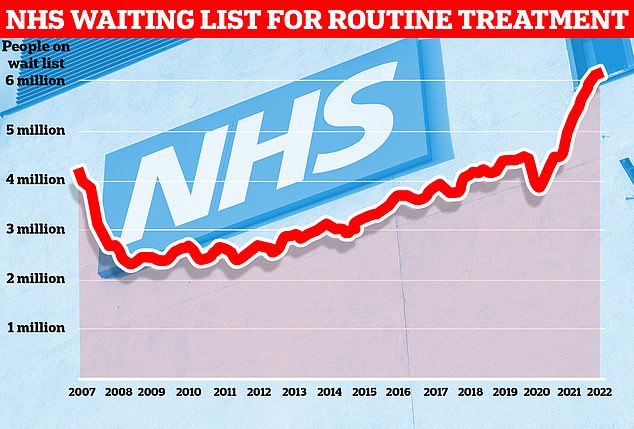 A&E performance targets also hit a record low in January with only 73.3 per cent of patients seen within the four hour target.