NHS hospitals are continuing to bar virtually all relatives

Why are patients STILL not allowed to have visitors? NHS hospitals are continuing to bar virtually all relatives over Covid concerns

Last month Becky Render watched as her frail, 86-year-old father was loaded into the back of an ambulance and tried to calm his obvious distress with a promise to visit him later in hospital.

Peter Stead was wincing in pain and barely conscious as he was rushed away for treatment of septic arthritis, a potentially fatal infection in the joints, affecting his right shoulder.

But when Becky called York Hospital that morning, she was told she couldn’t visit him that day or the next. Five weeks on and Becky still hasn’t been allowed to see him.

York and Scarborough Teaching Hospitals Foundation Trust has barred virtually all visiting because of concerns about Covid, a move Becky calls ‘inhumane and unbelievably cruel’.

Peter, a former factory worker, has spent his entire stay in a room on his own with a TV he can’t operate. 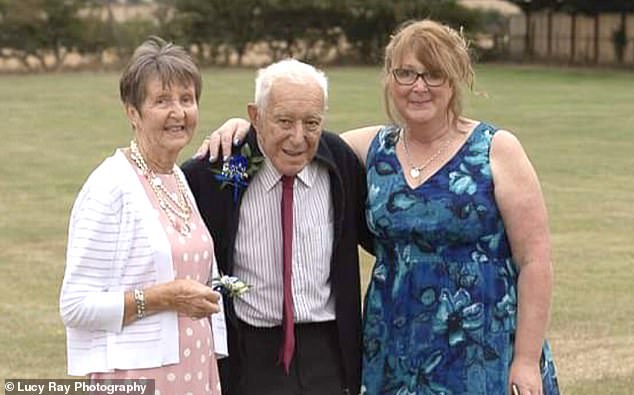 Peter Stead was wincing in pain and barely conscious as he was rushed away for treatment of septic arthritis, a potentially fatal infection in the joints, affecting his right shoulder. But when Becky called York Hospital that morning, she was told she couldn’t visit him that day or the next. Five weeks on and Becky still hasn’t been allowed to see him. Peter Stead is pictured with wife Patricia and daughter Becky

In that time he has been granted only two hour-long visits with his wife of 59 years, Patricia, 79, a retired postwoman, who had to wear full personal protective equipment (PPE), including gloves and a face mask.

But even those visits are now not allowed. Due to ‘rolling’ Covid cases at the hospital, virtually all visits have been stopped over the last three weeks. During emotional phone calls, Peter has told Becky he feels so isolated he is losing the will to live.

‘My mum and I are distraught and my dad is close to giving up completely,’ says Becky, 57, a florist, who lives next door to her parents with her husband Keith, 64, a mechanic, in East Heslerton, North Yorkshire. ‘We thought that life was going back to normal after Covid, but not in hospitals it seems,’ she says.

‘The last time we spoke to dad he said he wanted to close his eyes and give up. He’s on intravenous antibiotics but they aren’t clearing the infection — we think this is because of the stress of being torn apart from his family. Why is it that the rest of the world is now carrying on as normal but people in hospital are being denied basic rights like seeing their families?’

Last week NHS guidance was altered to encourage hospitals to allow patients to permit visitors ‘for at least one hour a day and ideally for longer’.

The guidance acknowledged: ‘It is important to recognise the contribution that visiting makes to the wellbeing and person-centred care of patients.’ This followed previous visitor guidance published by the Government in March 2021, which allowed only one family member or friend to visit someone in hospital during the pandemic and even then only in exceptional circumstances such as imminent death.

Yet despite the apparent loosening of the rules, hospitals are continuing to limit visiting or banning it outright.

For example, St Helens and Knowsley Teaching Hospitals Trust on Merseyside suspended all visits from February 27 with limited exceptions. According to its website, Barnsley Hospital Foundation Trust has decided to suspend ‘non-essential visiting’, citing ‘extreme circumstances and a rise in Covid-19 cases’.

Others are allowing only one visitor at a time for one hour a day or every other day.

At York Hospital, the rules were relaxed on February 14 to allow one visitor who could book a slot of up to an hour. However, since then access has been restricted due to Covid cases — a decision the hospital says it is ‘constantly reviewing and revising’.

Becky recognises that cases of Covid are rising and has nothing but praise for her father’s medical care, but adds: ‘There must be a way to let us see him when he needs us. Covid is now supposed to be less deadly than the flu and we have effective vaccines. Why are hospitals still in lockdown?’ In a cruel twist, despite being deprived of visitors, Peter tested positive for Covid at the start of this month which the family believes he can only have contracted in the hospital.

‘Luckily, Covid hasn’t made him any more poorly,’ says Becky.

Campaigners are now calling for legislation to guarantee relatives’ rights to visit loved ones in hospital. Last week, organisations including John’s Campaign which is calling for extended visiting rights for patients with dementia, met a cross-party group of MPs to secure backing for a law to ensure people in hospital have unrestricted visits from at least one relative or friend. Currently visiting rights are at a hospital’s discretion. Julia Jones, co-founder of John’s Campaign, told Good Health: ‘We say carers are not visitors. They are essential.’ 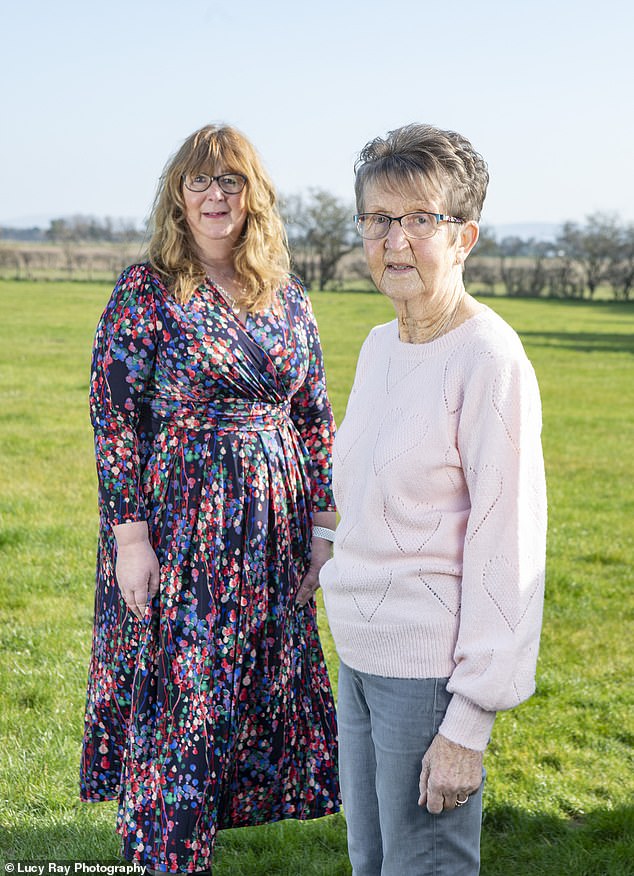 Due to ‘rolling’ Covid cases at the hospital, virtually all visits have been stopped over the last three weeks. During emotional phone calls, Peter has told Becky he feels so isolated he is losing the will to live

Campaigners point to studies showing patients who don’t have visitors do less well. A survey of hospital nurses carried out by the Royal Voluntary Service charity in 2019 found that two-fifths of patients without visitors required additional support from the nursing team. Some 43 per cent of nurses questioned said patients who didn’t have visitors were less likely to be mobile. Significantly, 37 per cent said patients without visitors were more likely to have a longer stay in hospital.

A lack of visitors can be especially damaging for dementia patients. A study published in the journal eClinicalMedicine in 2021 found that ‘isolation measures quickly damaged people with dementia, cognitive and mental health issues, and probably accelerated overall decline’.

Dr Aida Suarez Gonzalez, a clinical neuropsychologist at the Institute of Neurology in London, told Good Health: ‘It is urgent that infection control measures applied to people with dementia are balanced against the basic principle of medical practice ‘First, do not cause harm’. Confinement is the opposite of what a person living with dementia requires.’

Wendy Mitchell, 66, an author from East Yorkshire, has early-stage dementia and says that a ban on hospital visitors meant she insisted on being treated as a day patient when she broke her wrist last Christmas.

‘It was a complex break and I needed an operation but there was no way I was going to stay in hospital,’ she says.

Wendy relies on support from her daughter Sarah, a nurse.

Wendy adds: ‘She wouldn’t have been able to stay with me and that could have been very dangerous. I’m allergic to a drug but I can’t remember what it is. I don’t feel hunger and forget to eat. I need social interaction because of my dementia, not being left alone all day.’ Wendy feels angry that hospitals prioritise Covid safety over isolation. ‘The risks of not allowing us to have visitors far outweigh the risks of getting Covid,’ she says.

NHS England sent a letter to healthcare leaders on February 23 saying hospital visiting guidance ‘is being reviewed in light of the living with Covid plans’. 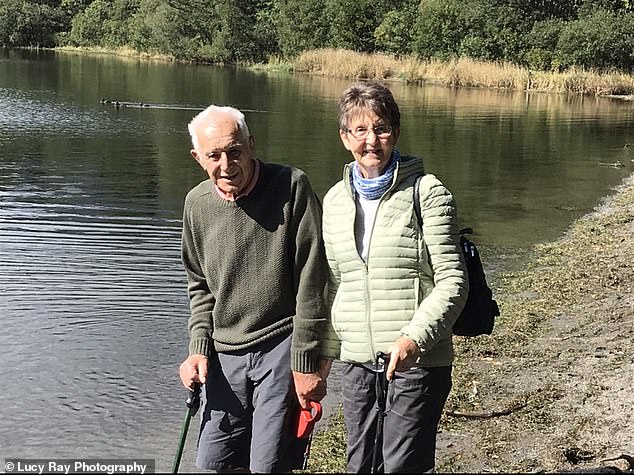 Some, like Peter, find using a mobile troublesome. He makes the odd call on the phone that his family gave him, but remains alone in his room with no idea when he will go home

It promised these plans would be published shortly so that visitors could attend hospitals ‘in a manner that continues to protect patients and staff’.

‘Some hospitals may allow you to deliver a phone if the person you want to visit does not have one,’ she says. ‘Even if your loved one is unable to communicate with you, they may find hearing your voice comforting.’

Some, like Peter, find using a mobile troublesome. He makes the odd call on the phone that his family gave him, but remains alone in his room with no idea when he will go home.

A spokesman for the York and Scarborough trust said visiting is allowed ‘for end-of-life situations, patients who are vulnerable such as those with a learning disability, dementia or cognitive impairment, or other extreme circumstances where the nurse in charge deems this as suitable’.

They added: ‘The extreme situation of Covid means we have, from time to time, been required to restrict visiting to our hospitals or wards where visiting may pose a risk to highly vulnerable patients. This is not a decision we take lightly.’

But the lack of visits isn’t just taking its toll on Peter.

Becky explains: ‘Mum was so upset at one point that she had an attack of angina and had to be hospitalised herself two weeks ago. She was kept in hospital for two days.’

The family is pushing the hospital to let them visit.

Becky says: ‘We call every day and we’ve offered to do whatever it takes — lateral flow tests, PPE but it’s still a flat ‘No’.’

Nathaniel Kleitman, widely regarded as the father of sleep research, was known for his ambitious experiments in the 1930s, especially ones where he was his own guinea pig.

To find out whether our natural sleep pattern could be altered, Kleitman and his research assistant, Bruce Richardson from the University of Chicago, conducted an experiment in Mammoth Cave, Kentucky, which receives no natural sunlight and stays at a constant temperature. They lived for 32 days at 140ft underground and would sleep for nine hours, work for ten, then spend another nine in leisure activities, attempting to shift the natural cycle from seven 24-hour days to six 28-hour days. Both total 168 hours.

While Kleitman, aged 43 at the time, was not able to adjust his internal clock to a longer day, his 20-year-old assistant was able to move into the new schedule within a week.

It’s thought that Richardson’s younger age and erratic sleeping habits as a student may have contributed to their results. Kleitman’s research has helped pave the way for our understanding of the body clock — known as circadian rhythms.

It has also offered practical recommendations for shift workers whose sleep schedules are often irregular.