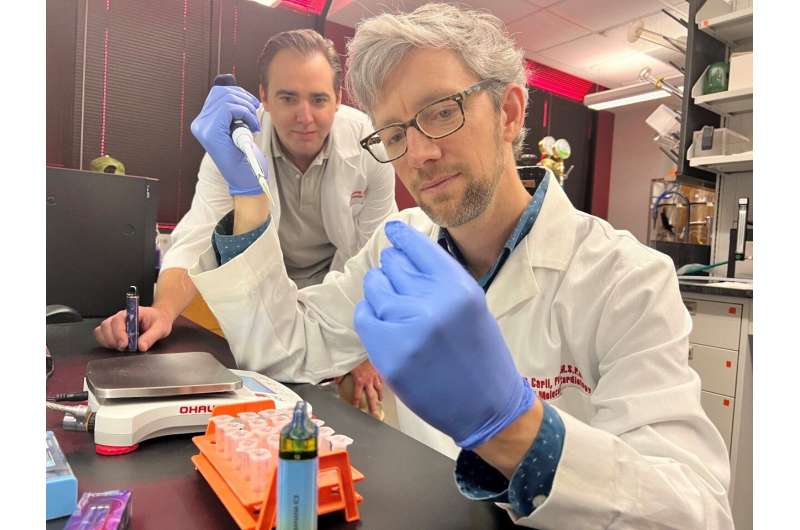 A new study from University of Louisville researchers in the Christina Lee Brown Envirome Institute has found that exposure to e-cigarette aerosols can cause heart arrhythmias in animal models—both in the form of premature and skipped heart beats. The study findings, published Oct. 25 in Nature Communications, suggest exposure to specific chemicals within e-cigarette liquids (e-liquids) promote arrhythmias and cardiac electrical dysfunction.

“Our findings demonstrate that short-term exposure to e-cigarettes can destabilize heart rhythm through specific chemicals within e-liquids,” said Alex Carll, assistant professor in the UofL Department of Physiology who led the study. “These findings suggest that e-cigarette use involving certain flavors or solvent vehicles may disrupt the heart’s electrical conduction and provoke arrhythmias. These effects could increase the risk for atrial or ventricular fibrillation and sudden cardiac arrest.”

The researchers tested the cardiac impacts of inhaled e-cigarette aerosols solely from the main two ingredients in e-liquids (nicotine-free propylene glycol and vegetable glycerin) or from flavored retail e-liquids containing nicotine. They found that for all e-cigarette aerosols, the animals’ heart rate slowed during puff exposures and sped up afterwards as heart rate variability declined, indicating fight-or-flight stress responses. In addition, e-cigarette puffs from a menthol-flavored e-liquid or from propylene glycol alone caused ventricular arrhythmias and other conduction irregularities in the heart.

Conducted in collaboration with Daniel Conklin and Aruni Bhatnagar, professors in the UofL Division of Environmental Medicine, this work adds to a growing body of research on the potential toxicity and health impacts of e-cigarettes reported by the American Heart Association Tobacco Regulation and Addiction Center, for which UofL serves as the flagship institute.

“The findings of this study are important because they provide fresh evidence that the use of e-cigarettes could interfere with normal heart rhythms—something we did not know before,” Bhatnagar said. “This is highly concerning given the rapid growth of e-cigarette use, particularly among young people.”

As e-cigarette use has grown nationwide, the potential advantages and harms of vaping have been debated. Since vaping does not involve combustion, it exposes users and bystanders to little if any carbon monoxide, tar or cancer-causing nitrosamines compared with conventional cigarettes. However, e-cigarettes can deliver aldehydes, particles and nicotine at levels comparable to combustible cigarettes. Vaping might help smokers quit combustible cigarettes, but the appeal and addictiveness of e-cigarettes may encourage youth to vape amidst unknown long-term risks or take up smoking. More than 25% of high schoolers and 10% of middle schoolers in the U.S. reported using e-cigarettes before the pandemic.