Even as the coronavirus disease 2019 (COVID-19) pandemic continues to persist throughout the world, efforts to understand the transmission of the severe acute respiratory syndrome coronavirus 2 (SARS-CoV-2) are still being conducted. A new study published on the preprint server medRxiv* describes the long-range transmission of SARS-CoV-2 through aerosolized particles as a possibility, given the presence of a combination of factors. 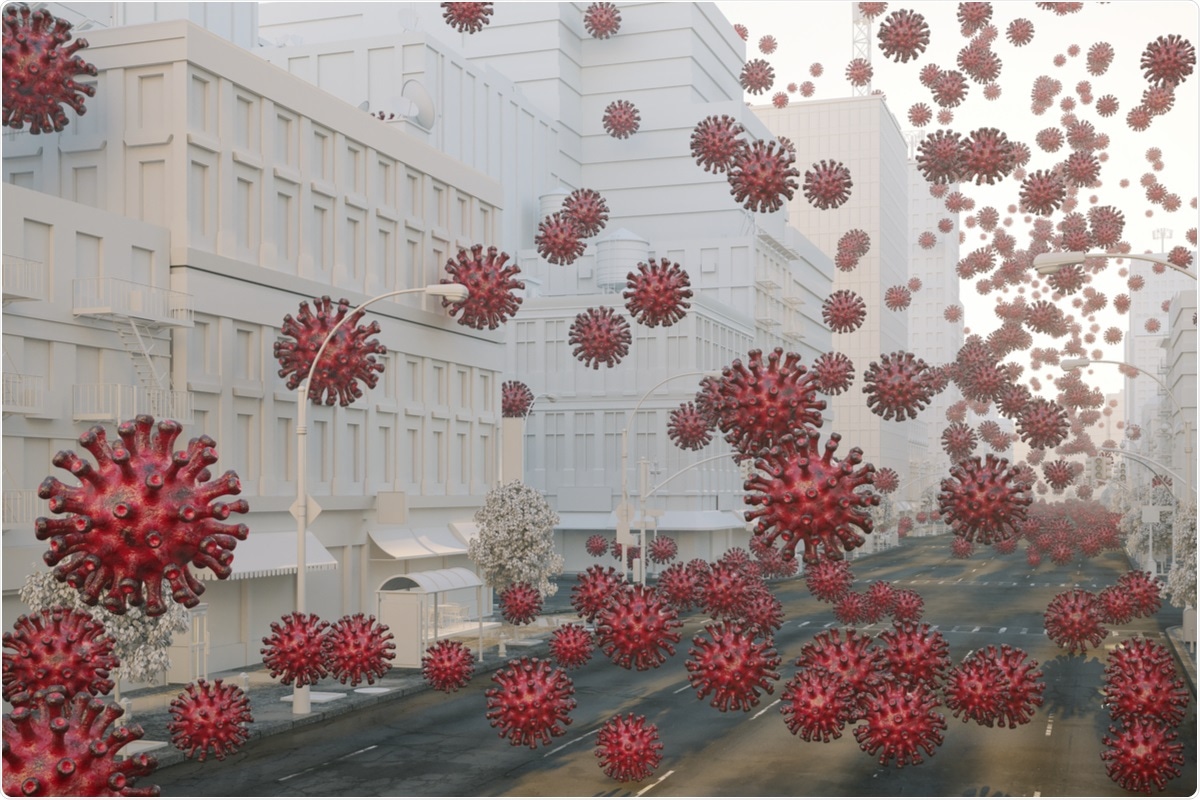 Following much debate about the mode of transmission of SARS-CoV-2, scientists largely agree that respiratory droplets and other aerosols play a major role. Thus, adequate ventilation indoors has become an important aspect of preventing viral spread.

In a recent paper, we have shown via simple modeling based on air flows, that the outdoor risk of being contaminated is generally several orders of magnitude less than indoors.”

The ability to identify infected cases early enough that transmission is preventable by isolation and quarantine measures remains an important aspect of controlling the current pandemic. To this end, ‘patient zero” refers to the unknown patient who first introduces the virus across international borders, thus triggering a local or national outbreak.

The public health efforts to contain the spread of SARS-CoV-2 have been further challenged by the emergence of more virulent strains like the Delta and Omicron variants, both of which are associated with much higher infectivity, greater viral loads, as well as more rapid and extensive transmission capabilities, all of which are associated with a greater risk of infection through aerosols.

In the current study, researchers explore the potential for long-distance airborne spread of SARS-CoV-2 into a new region, resulting in the formation of more “patient zeros” who can cause new outbreaks. Though such long-range spread is inadequate to sustain the epidemic because of the rarity of such events occurring in combination for even one patient, the fact remains that it can happen in several individuals in a population with hundreds of thousands of people.

The current model demonstrates the feasibility of such transmission that can lead to more “patient zeros.” SARS-CoV-2 is only about 100 nanometers (nm) in size, which allows it to be carried in microdroplets in the expiratory aerosols of an infected individual. Evaporation of water causes these microdroplets to become dry nuclei that contain proteins, salts, and other minor components that are always 40% or more of the original size as a result of the presence of non-volatile components.

This size indicates that infected particles remain suspended in the air for long periods and can thus be captured by air currents. At the same time, SARS-CoV-2 is quite susceptible to high temperatures, high humidity, and ultraviolet light.

Further analysis of earlier reports on airborne smoke particles, as in the fire in Buncefield fuel depot in 2005, shows that smoke traveled over a hundred kilometers (km) from the north of London to Brittany and Normandy in France, and even farther after dilution. Though most of the smoke particles remained suspended in the troposphere, the spread of these particles during summertime conditions would have been different.

As both stagnation and convection occur, smoke particles could have settled to earth in the north of France. This is due to the transport of sand particles from the Sahara, plastic microparticles, particles of soot from brush clearing, and the transport of pollen from North America to Greenland.

Similar long-range transmission has been demonstrated earlier in animal models, although the factors responsible remain uncertain. Still, these models consider a single or a very few viruses as sufficient to establish infection. If so, SARS-CoV-2 might cross the border without requiring the movement of an infected traveler.

In the current model, the researchers attempt to define a dose-response relationship for SARS-CoV-2. This will depend on the inhalation of infectious particles in the air, the state of host defenses, and the loss of pathogens before replication can occur within the infected cell.

Quantum concentration, which is otherwise known as a “quantum of contagium,” is considered a hypothetical quantity that has been inhaled per susceptible individual when 63.2% of individuals display symptoms of infection. The model shows it is possible to predict the chances of infection of a susceptible person, given the rate of production of quanta, the number of infected persons in the room, as well as the rate of respiration and ventilation in the lungs and room, respectively.

The researchers also looked at outdoor transmission of the quanta along the direction of wind flow. Given these results, the researchers then predicted a lifetime of several tens of hours at low temperatures and high humidity levels. Taken together, they predicted the statistical risk of contamination of susceptible people downwind of an infected region, such as from the west to the east in Western Europe.

For instance, the researchers illustrated their premise by finding the risk of getting a “patient zero” in Northern France through windborne virus particles blown eastward from Southern England, specifically Greater London. Notably, SARS-CoV-2 is primarily emitted indoors during winter, where it is rapidly inactivated. 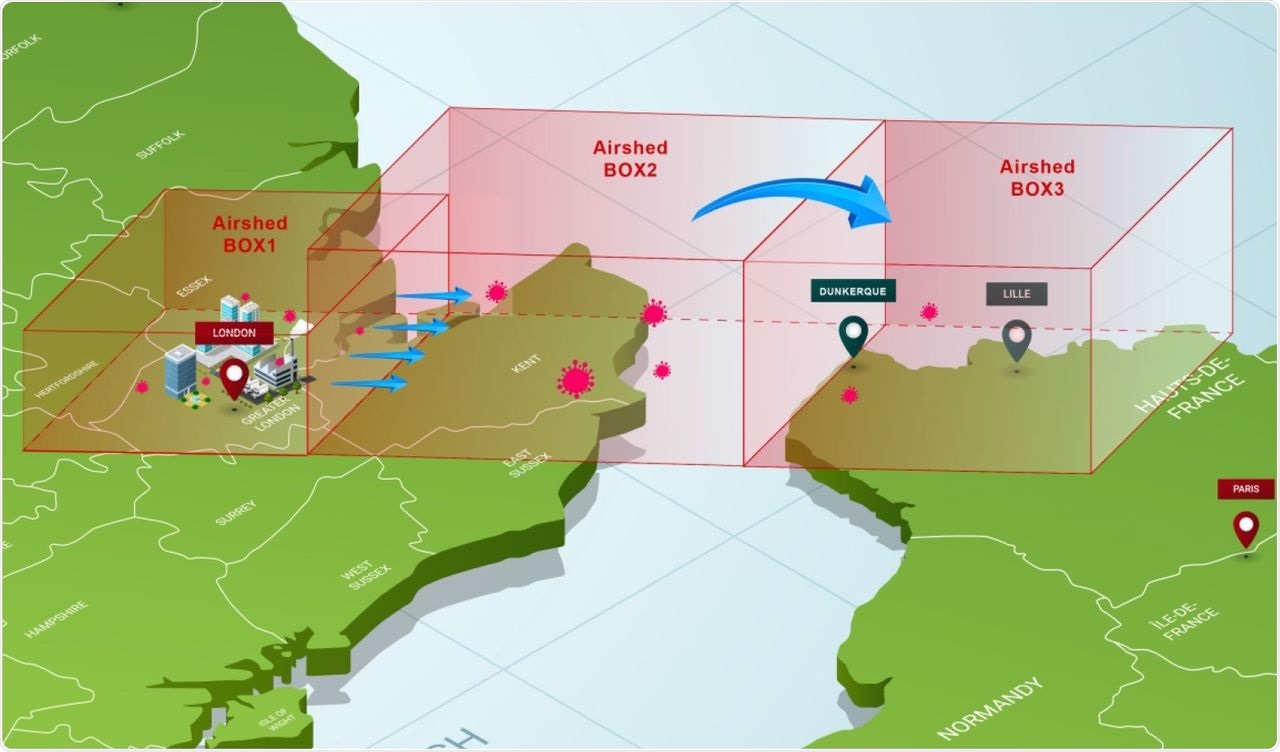 Model of three boxes between Greater London and Northern France

Outdoors, the wind transports viral particles at low temperatures and high humidity. The viral particles are constantly replenished from indoor air exhausted outdoors in inverse correlation to the air changes per hour. Under this new lower quantum emission rate per individual, the researchers found that an infection could result in two target areas in France under the prevailing winter wind direction and speed.

We demonstrate in the present work that long-range transport of infectious aerosols can initiate patient “zero” creation at distances downwind beyond one hundred kilometers.”

In the current study, a dose-risk function equation set was used to show that infection may occur at large distances from a thickly populated region with high rates of infection. Importantly, the target population should be large, which compensates for the low probability of the infection event.

This conclusion rests on the premise that infection may occur even with a single viral particle, though the probability is small. The dose-risk function used in this model requires no threshold for minimum infective dose and has been successfully used in many previous situations. Despite this conclusion having been accepted in veterinary science for quite some time, this is the first time it is being drawn in humans with respect to the airborne spread of a virus.

Using this function together with the “quantum of contagium,” the researchers demonstrate the feasibility of viral transmission at a long-range. Practically, this means that there is sometimes no “patient zero;” that SARS-CoV-2 can cross both national and international borders without the need of an animal host and instead through a prevailing wind. However, this phenomenon likely only occurs in the northern latitudes and during the winter months.

medRxiv publishes preliminary scientific reports that are not peer-reviewed and, therefore, should not be regarded as conclusive, guide clinical practice/health-related behavior, or treated as established information