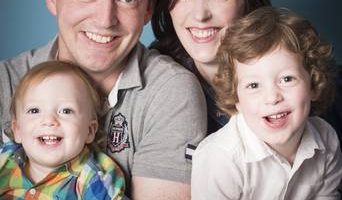 My family's burden of grief and financial struggle: Stephen Teap on the true cost of cancer

Like most young couples in Ireland, our dreams and ambitions were no different to anybody else’s. We wanted a home that we could call our own, a family, to go on holidays, to be able to go out and socialise as we wanted and so on.

In 2005, as the Celtic Tiger was creeping up on us, Irene and I were both 24 and we bought our first house.

We weren’t earning great money but we made it happen – it took both our wages to be able to pay our monthly bills, like so many other couples.

In 2009, I was made redundant in the crash, and for most of that year we struggled like the rest of the country with the uncertainty of everything around us. But we battled on. Thankfully, Irene had a wonderful stable job with the HSE.

At the end of 2009, I got back into the workforce and life started to get comfortable again and we were able to continue with our plans for the future and in 2011 we got married. Children were something we both wanted and the following year in December, Oscar arrived into our world, and our youngest Noah arrived in 2015. We had our home, a family, secure jobs, everything we wanted. Life seemed perfect.

Then, September 2015, five months after Noah was born, our lives changed forever. Our dreams were crushed, our future was rewritten. That was when Irene was diagnosed with cervical cancer.

This week the Irish Cancer Society published a report titled The Real Cost of Cancer.

The report highlights the real financial impact inflicted on individuals and their families that have to take on this horrific battle. For me, however, the report has opened up old wounds as I reflect on my own life when cancer, uninvited, came crashing into our world.

What I’ve come to learn over the last four years is that money has no real value. At the end of the day, it means nothing and it doesn’t matter how much or little you have. There is nothing that money can do when you’re faced with a real life or death situation. Which is why, when Irene got diagnosed, money was the last thing on our minds. But unfortunately some things in life just have a habit of creeping up on you.

When we hear of someone getting sick and the costs associated with it, our minds automatically go to the cost of treatment, consultants’ fees etc. Never do we think about how our incomes might be affected. For example, if you were to get sick in the morning and it turned out you had to go on sick leave for the next six months, financially where does that leave you? Will your employer pay your sick leave and if so, for how long? Many people in Ireland, particularly those who are self-employed, do not get any sick pay.

Your mortgage doesn’t know you’re sick. That still needs to be paid. Same with your electricity and heating, they don’t care, they’ll still want your money.

The creche will still need that big chunk of your wages each month. Nothing changes, the bills don’t get sick, and they don’t go away. They just wait to be paid.

For the first six months we didn’t even think about money. We were focused on fighting the cancer – we were in the biggest fight of our lives. Irene got full pay from her employer, it wasn’t until the next six months when her pay went to half pay that we really sat up and took notice, because we knew that Irene’s pay was eventually going to go to zero and we would have to start relying on illness benefit which was only a fraction of her income.

The second year of Irene’s battle was the worst. She was very ill, in and out of hospital every month, with infection after infection, the minimum stay on average was one week at a time. We were reduced to a one-income household. At the same time, all our outgoings increased. From childcare to one-off costs like Irene buying a wig, which ended up costing nearly €1,000. The two boys were both in nappies, with one in creche. It was just so expensive, and stressful.

I remember one day in Tesco, doing the weekly shop, I got to the top of the till to pay and took out my debit card to pay. All of a sudden I broke out in a sweat. With all the running around I never checked my bank balance before I headed off shopping. I was there at the till putting my pin into the keypad, sweating, holding my breath in fear until that magical green tick appeared saying “approved”. How the hell had we come to this?

When you are diagnosed with cancer, it’s all about the medicine and treatment, there is no support or advice about managing yourself or your finance.

This week’s report highlights a lot of areas that affect people- which is great – but it also now highlights the need for access to supports and providing more information and support around this. Am I entitled to a medical card? If so, how do I go about it?

We were very fortunate to have a consultant who was on the ball in this regard: he knew the system, knew how to get it done and one day Irene’s medical card just appeared in the post.

But for many it isn’t like this, they aren’t so lucky and don’t have a clue how to go about this.

This report also highlighted other costs, ridiculous ones at that, like the car parking charges. I’ll never forget one particular time when Irene was in hospital with another infection and this time round she was in for two weeks. It was a Sunday, she was missing the boys desperately and they were missing her, so I took them in to see her. I remember being there for two hours, looking at the clock and wondering if I go over the next hour do I have enough money on me to pay for the car park.

When I look back on this now I can’t help but feel so stupid for even thinking this, given where we are today and the fact that Irene is no longer here, but this was our reality at the time.

And it will be the reality for countless other families.

The financial impact of cancer is never-ending. Irene sadly passed away in July 2017 at the age of 35. I became a widower at the age of 36 and at the ages of four and two, our two little boys became motherless.

Now that I’m a single parent the costs of cancer continue as myself and my boys continue moving forward into our new life that has been thrust on us.

It’s two-and-a-half years since Irene passed and the fight for us still continues. The price of cancer we’re still paying for everyday, whether it’s the price of grief associated by losing Irene or the ongoing financial impact we struggle with and try to adjust to everyday.

I hope this report helps to bring in more supports for people who are impacted by cancer and streamline and communicate these supports in a more efficient way than how it’s currently being done.

A “one stop shop” approach needs to be introduced to ease the burden on those affected by cancer – beyond the medicine and care, the supports to ease the unnecessary financial burdens enforced on to families now need to be addressed

If you want to view ‘The Real Cost of Cancer’ report, you can find it on the Irish Cancer Society website at www.cancer.ie/RealCost