The chief executive of Memorial Sloan Kettering Cancer Center sent an email to all staff members on Sunday saying that the institution and its faculty “need to do a better job” of disclosing their relationships with the drug and health care industries.

“The matter of disclosure is serious,” wrote the executive, Dr. Craig B. Thompson, along with Kathryn Martin, the chief operating officer.

The email, which was labeled an “important message,” referred directly to an article published this weekend by The New York Times and ProPublica about the failure of Dr. José Baselga, the cancer center’s chief medical officer, to disclose his extensive industry relationships in dozens of research articles since 2013.

The Times and ProPublica found that Dr. Baselga had received millions of dollars in consulting fees and in ownership interests in health care companies, but had often failed to disclose those ties in appearances at scientific conferences and in journal articles. His reporting failures included articles in prestigious publications like The New England Journal of Medicine and The Lancet as well as in Cancer Discovery, a journal for which he serves as one of two editors in chief.

Dr. Baselga acknowledged that he had frequently failed to disclose industry connections, and said he planned to correct the record in 17 recent articles. But he disputed whether he should have disclosed his ties in dozens of other cases, saying that the articles involved early-stage research for which there was little financial implication for companies.

Several institutions, including The New England Journal of Medicine and the American Society of Clinical Oncology, have said they are looking into his disclosures. The American Association for Cancer Research said it had also begun a review of Dr. Baselga’s reporting practices. Dr. Baselga appears to have violated disclosure rules while he was president of that organization in 2015 and 2016. The A.A.C.R. also publishes Cancer Discovery.

In the email, Dr. Thompson and Ms. Martin described the guidelines for reporting industry relationships as “nebulous,” adding that “we need to work with journal publishers and professional societies to standardize the reporting process.” They said they had been discussing the issue with ASCO, the cancer group, which has pushed for more standardized disclosure.

A decade ago, a series of scandals relating to hidden payments by drug companies to prominent physicians prompted medical journals and professional societies to beef up their reporting requirements. But as Dr. Baselga’s case and others demonstrate, much is still left to the honor system. Medical journals have said they don’t routinely fact-check authors’ disclosures. 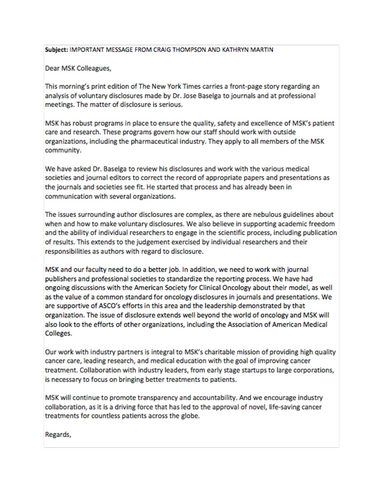 In comments to The Times and ProPublica, The New England Journal of Medicine acknowledged that the problem of failed disclosures is “widespread” and said it was putting in place a better system to track authors’ disclosures. Two of the articles that Dr. Baselga said he planned to correct were published in that journal.

Dr. Baselga has served since March on the board of Bristol-Myers Squibb, a major manufacturer of cancer drugs, and since 2017 on the board of Varian Medical Systems, which sells radiation equipment to cancer centers, including to Memorial Sloan Kettering.

Dr. Baselga received nearly $3.5 million in payments from drug, medical equipment and diagnostic companies from August 2013 through 2017, according to Open Payments, a federal database that tracks payments to physicians from health care companies. The bulk of that amount, about $3 million, involved a payment from Genentech, a subsidiary of the Swiss pharmaceutical giant Roche, for Dr. Baselga’s ownership interest in a company it acquired, Seragon Pharmaceuticals, in 2014.

But that total amount does not include many companies with which Dr. Baselga has ties that do not report physician payments to the federal database because they are biotech start-ups without any products approved by the Food and Drug Administration. Dr. Baselga declined to provide a tally of the money he has received from such companies.

In the email to staff, Dr. Thompson and Ms. Martin closed by affirming the value of working with the health care industry.

“Collaboration with industry leaders, from early stage start-ups to large corporations, is necessary to focus on bringing better treatments to patients,” they said.

Christine Hickey, a spokeswoman for Memorial Sloan Kettering, said the cancer center had no further comment.

Charles Ornstein is a senior editor at ProPublica, the nonprofit investigative journalism organization.