NHS Digital data released today revealed just 60 per cent of consultations in England in January were in-person, compared to 61 per cent in December.

Only a third of appointments were face-to-face in the worst-performing areas of the country, situated in the north.

The proportion of in-person consultations is now at its lowest level since August and has been falling consistently since October, coinciding with the scaling up of Britain’s booster jab drive which heavily relied on family doctors.

It disrupted Sajid Javid’s pledge to revolutionise GP access to ensure all patients are able to see a doctor face to face, which originally included identifying surgeries that saw too few people in person.

NHS chiefs last month told GPs to ‘restore routine services’ with the worst of the pandemic clearly over, pushing them to try to pick up progress on improving face-to-face access again.

And in a call to action on England’s historic Covid ‘Freedom Day’, Tories are now urging Mr Javid gets tougher on family doctors so that they focus on getting back to pre-pandemic levels of face-to-face appointments.

Conservative Joy Morrissey — who last year called for cash incentives for GPs to make in-person appointments — told MailOnline: ‘Making sure we get back to face-to-face appointments must be a key objective of learning to live with Covid.

‘I very much welcomed the Government announcement of a blueprint for improving access to GP appointments in October.

‘Seasonable pressures and concerns about the Omicron variant may have slowed our progress, but I am confident we will be back on track soon with this essential mission.’ 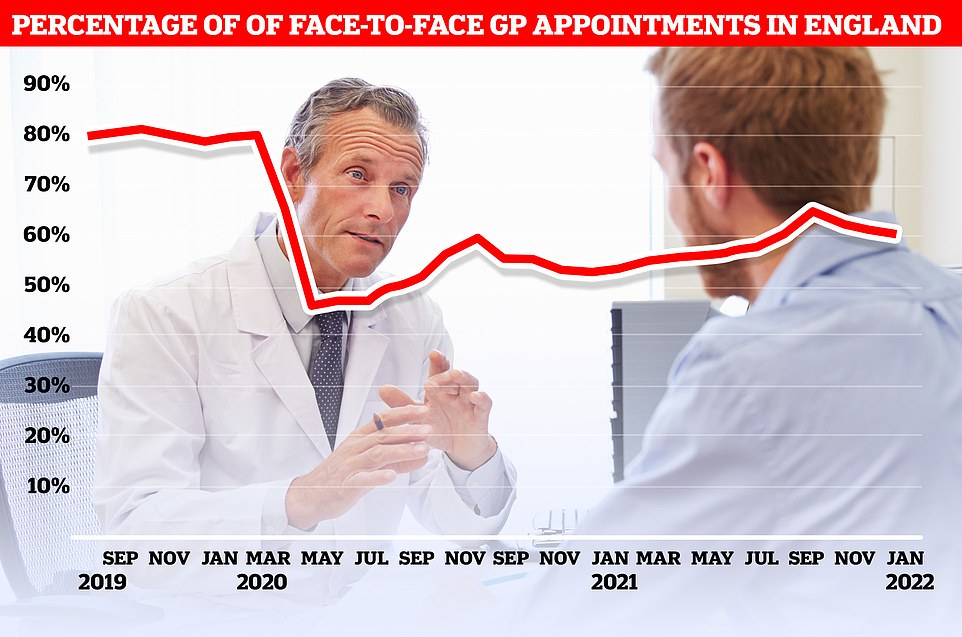 NHS Digital data released today shows just 60 per cent of appointments in January were in-person, compared to 61 per cent in December 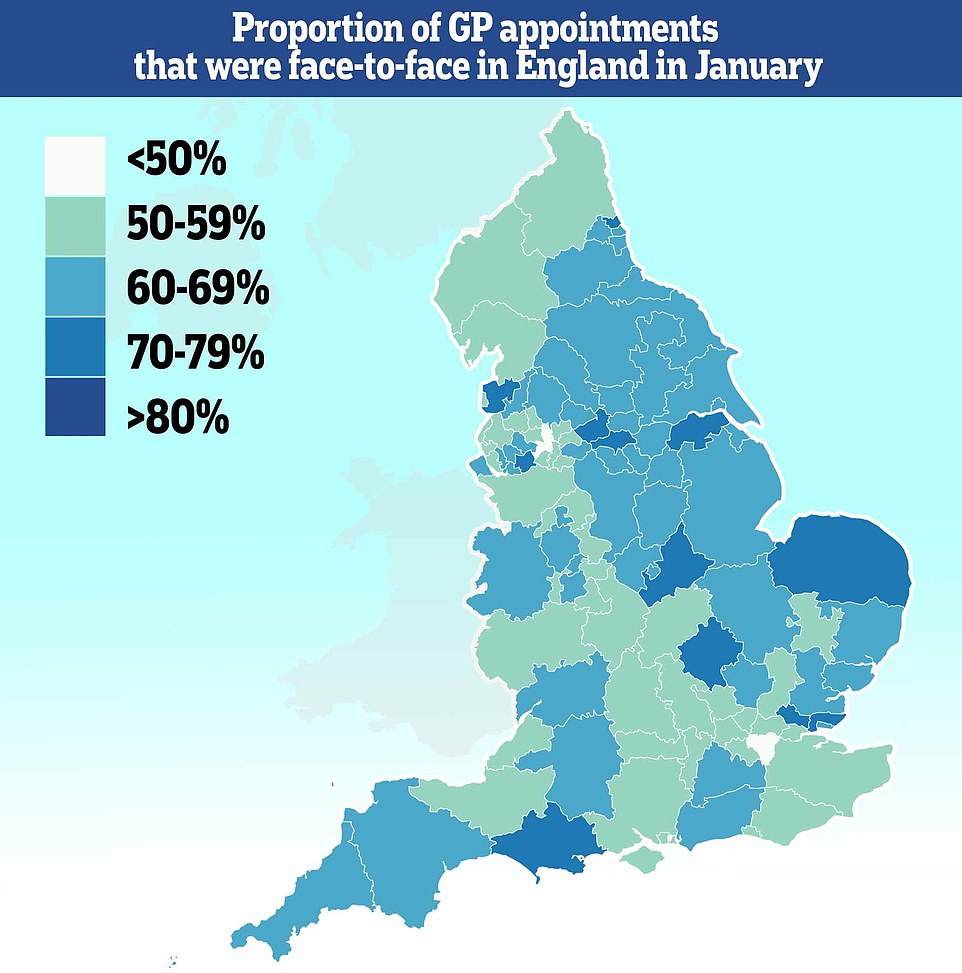 Fewer than half of all consultations in parts of the country are now face-to-face, with just 37 per cent of people in Bury being able to see their doctor in-person during the month 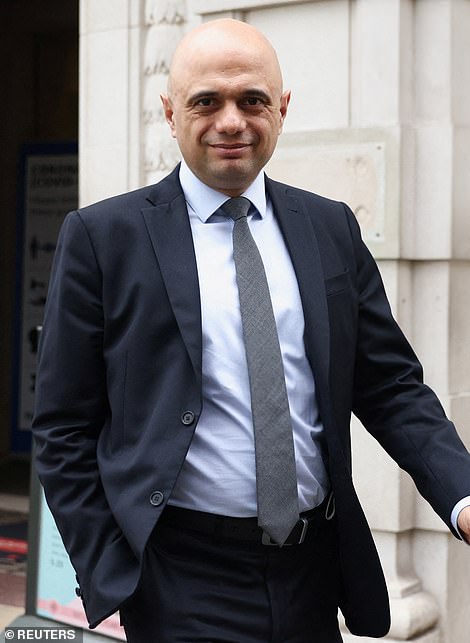 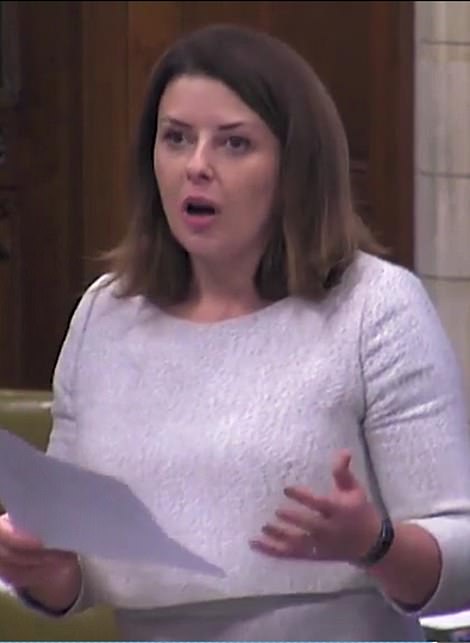 Sajid Javid (left) unveiled a package of measures to ensure GPs start allowing their patients to visit them again, including publishing league tables for surgeries — although he was forced to deny doctors would be ‘named and shamed’ after a row with unions. Conservative MP Joy Morrissey (right) told MailOnline boosting face-to-face appointments should be a ‘key objective of learning to live with Covid’

NHS operations could be cancelled if nurses get more than a 3 per cent pay rise, ministers have hinted.

Organisations representing doctors and nurses have been pressing for a substantial pay rise following the efforts of ‘exhausted’ staff during the pandemic.

After being met with rage for offering a 1 per cent raise last year, the Department of Health and Social Care eventually agreed its current 3 per cent offer.

But going further and keeping nurses’ pay in line with inflation — currently around 5.4 per cent — would cause ‘stark trade-offs’ and hamper the NHS’s ability to deal with the record surgery backlog, a DHSC report warned.

It said increasing pay any further would ‘materially impact government’s ability to deliver on […] commitments’.

The DHSC said there was a ‘need for greater financial restraint’ in the health service in its submission to the NHS pay review body.

The NHS data shows Bury had the lowest proportion of face-to-face appointments during the month, with only 37 per cent of consultations taking place in-person.

For comparison, the highest proportion of face-to-face appointments was in Kirklees, West Yorkshire, which saw 77 per cent of patients able to see their doctor in-person.

She told MailOnline: ‘Sadly the issue of struggling to access an in person GP appointment was not just limited to the pandemic although this has pushed many practices to breaking point.

‘There has been a chronic shortage of GPs for some time and this added with a decade of under-investment in Primary Care services has left practices in Salford buckling under the pressure.

‘For example there is one practice with just eight GPs serving over 12,000 patients and most practices tell a similar story, some even worse due to a rapidly increasing local population.

‘This is a crisis and the Government must urgently act to source and train more GPs and primary care staff for Salford as well as providing a sustained increase in long term funding so that the immediate care so many people desperately need can be provided.’

Meanwhile, patients’ rights groups said the pattern of GP services ‘falling into’ just offering remote consultations has left people needing their services ‘unhappy’ with their priorities not being met.

Rachel Power, chief executive of the Patients Association, told MailOnline: ‘The latest data may reflect practices being busy with the Covid booster programme but they do suggest GP appointments have settled into a pattern of fewer face-to-face appointments and more telephone consultations.

‘Rather than primary care just falling into this way of working, or sanctions being applied against GPs, we’d like the NHS to undertake a programme of engagement with patients across the country to understand what patients’ priorities are. Primary care should be asking patients what their priorities are for primary care services.’

She added: ‘Our most recent survey, conducted in the month before Christmas, showed half of patients had struggled to get any kind of GP appointment.

‘Those that had remote appointments did not believe them to be as good as face-to-face appointments. This has been patients’ experience throughout the pandemic.

‘The NHS should make patients part of the solution by what is important to them. This will help the NHS plan its triage and resource prioritisation better.

‘At the moment patients are just getting what they’re given, and are unhappy with the way it’s being done.’

Nationally, face-to-face appointments made up roughly 80 per cent of all consultations in the months leading up to the start of the pandemic.

But the number of patients being seen in-person from March 2020 dropped rapidly, with people only encouraged to come in for emergencies because of the health risks of Covid.

In-person appointments made up as low as 47 per cent in May that year, but numbers began to pick up in October last year around the time Mr Javid announced his package of measures, which included imposing cash penalties on surgeries that refused to see more patients in person.

At the time, he claimed it should be a patient’s right to choose whether they see their GP face-to-face, arguing the pandemic was all but over before the emergence of Omicron.

It led to tension with medics and unions at the time, who claimed doctors were already over-worked and had been taking unprecedented numbers of appointments over the pandemic.

The Royal College of GPs hit back, criticising the plans as ‘unfair, demoralising and indefensible’. And other unions warned it could trigger a wave of retirements and ‘sink the ship altogether’.

Despite months of being strong-armed into seeing more patients in-person, GPs were then instructed to focus their efforts on dishing out boosters rather than seeing other patients.

And as booster coverage increased across the country and Covid cases plummetted, medical director for primary care Dr Nikki Kanani wrote to all GPs telling them to get back to offering normal service last month.

In the letter, she said: ‘It is now important that all services across the NHS, including in primary care, are able to restore routine services where these were paused in line with the Prime Minister’s request to focus all available resource on the omicron national mission.’