This is the moment a profoundly deaf baby hears her mother’s voice for the first time.

One-year-old Sienna Ashton, from Melbourne, Australia, was born with hearing disabilities in both ears in November 2017.

And, although her parents, Latham and Melanie Ashton, feared she’d never enjoy full auditory health – including the ability to speak properly, a recent cochlear implant transformed the youngster’s world.

Footage of the transformation shows her amazement as she listens to her mum, 28, speak after being fitted with a hearing aid.

She can also be heard uttering her first word: ‘mum’. 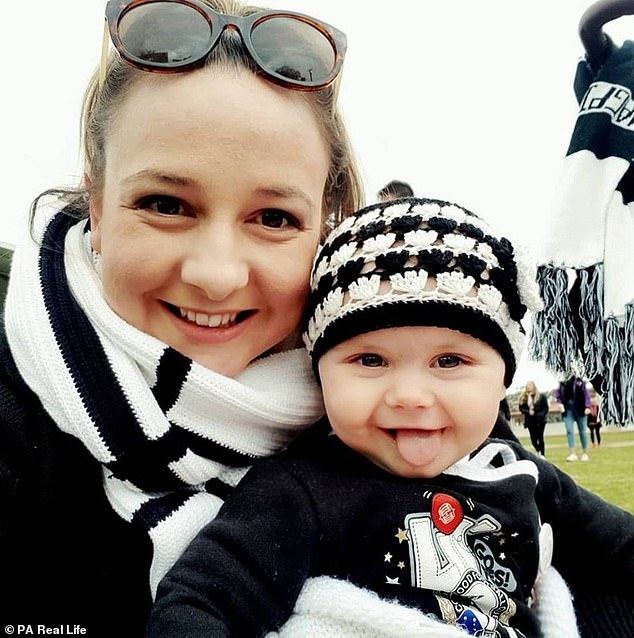 ‘Miracle’: Melanie Ashton with daughter Sienna, who was born with severe hearing difficulties

‘It was very emotional. I burst into tears, ‘ says Mrs Ashton, who captured the moment on camera.

‘We’d been afraid she would never speak, and I’d see other mums’ little ones hitting those milestones and wonder if that’d ever happen for Sienna.

‘Now we know she’s going to grow up just fine, and have a fulfilled life, with so much support around her.’

Now, the couple are sharing their story to give other parents hope and show them that they are not alone.

‘After diagnosis, it’s very normal to have a period of grieving, but I want other parents to know that help is out there,’ Mrs Ashton said.

‘It can be very isolating, and you feel as if other people don’t understand – but they really do.

‘I share a lot of Sienna’s journey online because it’s nothing to be ashamed of, and through that, I’ve received messages from all over the world from total strangers.

‘It’s comforting to know there are people who know how this feels.’ 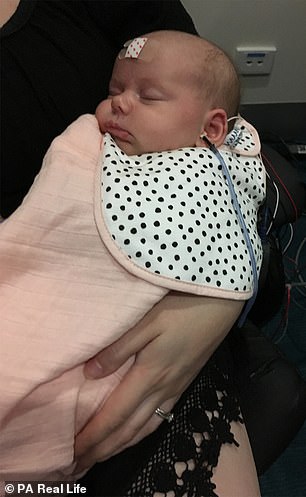 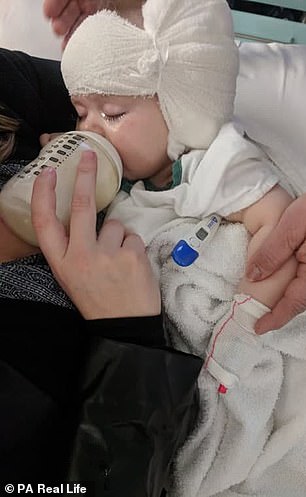 Impaired: Sienna (pictured left) at the test which confirmed her condition and (right) after her game-changing cochlear implant, which enabled her to hear and speak 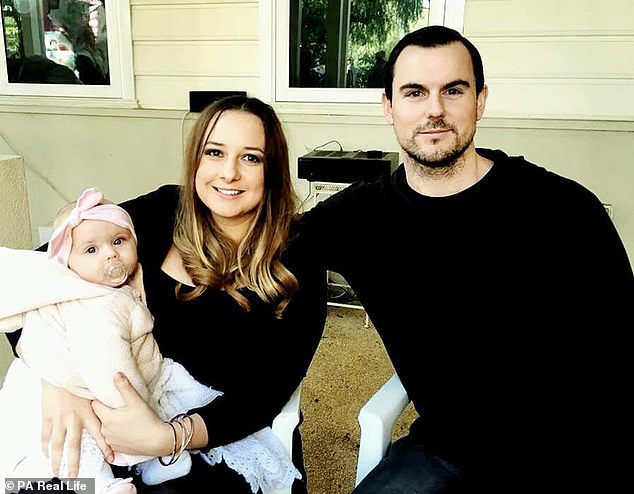 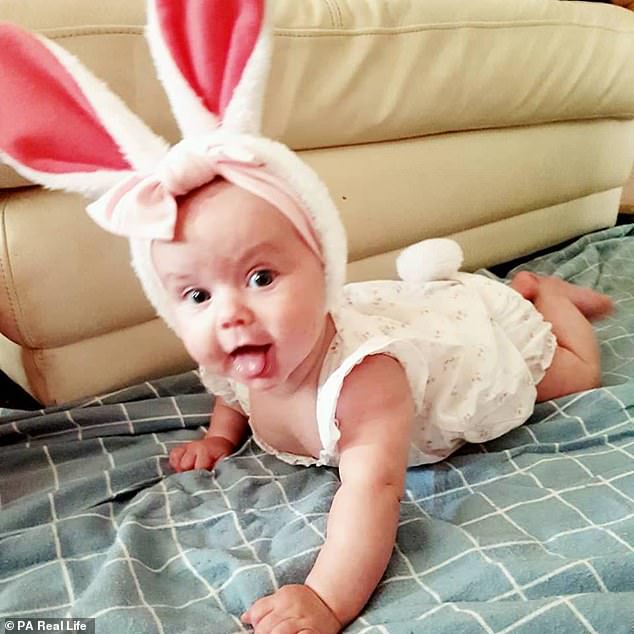 Diagnosis: An MRI scan showed she has enlarged vestibular aqueducts – narrow, bony canals that travel from the inner ear to the skull – which is thought to be linked to her hearing loss

The ‘miracle’ moment comes exactly one year after Sienna failed a routine hearing test at around 12 hours old.

Doctors said it could be the result of simple fluid build-up in the ear canal. But when, a week later, she failed a second test, alarm bells began to ring.

‘The hospital took it really seriously,’ said Mrs Ashton. ‘They gave us all this information about what to do if your child has hearing loss, then we were referred for further tests.’

Next came a tortuous wait as doctors investigated further, until Sienna was diagnosed at four-weeks-old with sensorineural hearing loss – a permanent condition resulting from inner ear or nerve damage.

An MRI scan also showed she has enlarged vestibular aqueducts – narrow, bony canals that travel from the inner ear to the skull – which is thought to be linked to her hearing loss.

‘She is profoundly deaf in her left ear, and moderately to severely impaired in her right,’ explained Mrs Ashton.

‘It was heartbreaking to hear. We had no idea if she’d ever even heard our voices, and couldn’t help but think of what life would be like and all the challenges she’d face growing up.

‘I’d been really sick throughout the pregnancy, so couldn’t help worrying that this was all down to something I had done wrong.’

Right away, doctors sprang into action, putting together a plan to give Sienna the best chance of being able to hear and speak as well as possible in the future.

While medics worked relentlessly behind the scenes, Mrs Ashton remained tormented by the idea of her little girl living in a silent world, unable to hear her mother’s voice.

Fortunately, everything changed for the better just before Sienna turned two months old, when she was fitted with hearing aids in both ears.

After switching them on, Mrs Ashton grabbed her camera, recording the very moment her baby heard the world around her for the first time.

‘It’s a subtle reaction, but you can see something has changed. She’s just taking it all in,’ she said. ‘At one point, she started to get a little upset, so I soothed her and that’s when I knew, without a doubt, she could hear me. 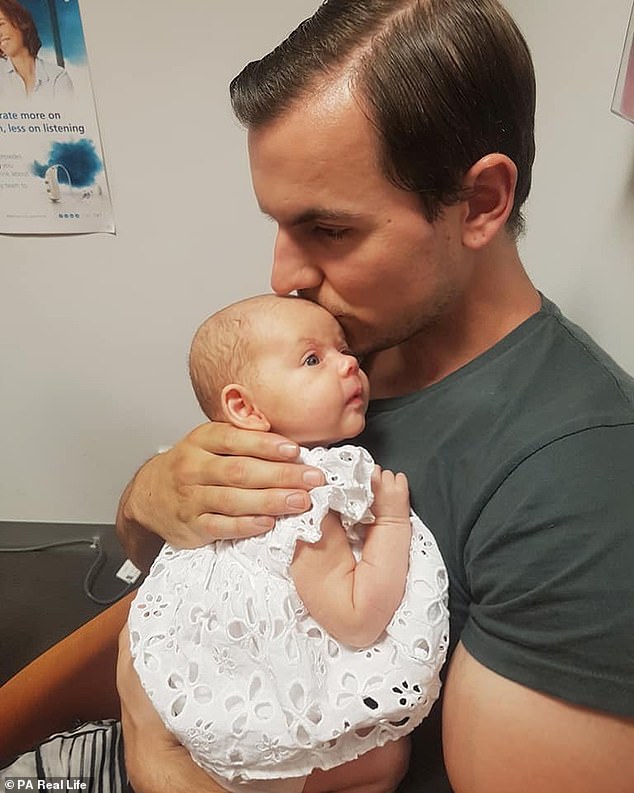 Concerned: Mr Aston and his wife were naturally concerned about their daughter’s future 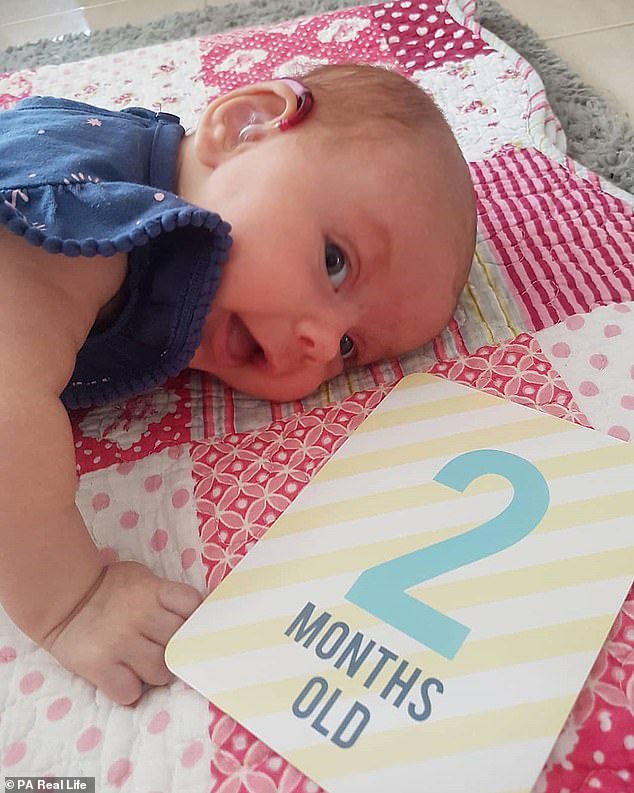 Progress: Still profoundly deaf in her left ear, her parents have taught her sign language to help her communicate 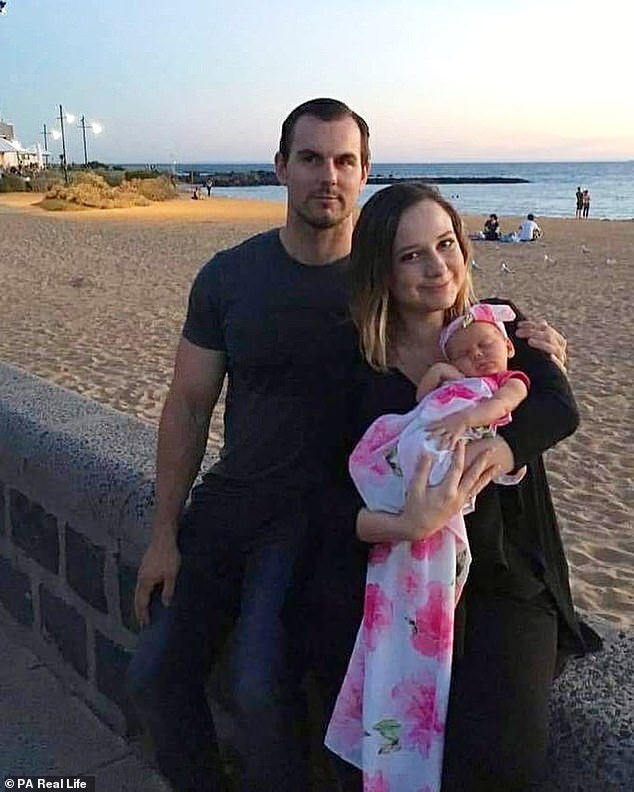 ‘If we have any more children, there is a chance we will pass it to them also, but seeing Sienna and what an amazing character she has makes us less afraid of this,’ the couple say

‘I was just reacting to her, telling her, ‘Hi bubba,’ over and over, so she could get used to me.’ Since then, Sienna has used her hearing aids every day.

Still profoundly deaf in her left ear, her parents began to teach her sign language to help her communicate, in case she never learned to talk.

Meanwhile, in August 2017, they received test results confirming that Sienna’s condition was genetic.

Mrs Ashton said: ‘Latham and I both unknowingly carried a gene that we passed on to her. It was a very bittersweet moment. We know now this was nobody’s fault, but it was difficult hearing about this gene we’d had no idea we had.

‘If we have any more children, there is a chance we will pass it to them also, but seeing Sienna and what an amazing character she has makes us less afraid of this.

‘There are discussions to be had, but we know the steps to take now, and how much support is out there.’

HOW DOES A TRADITIONAL COCHLEAR IMPLANT WORK?

Cochlear implants are small hearing devices fitted under the skin behind the ear during surgery.

They have an external sound processor and internal parts, including a receiver coil, an electronics package and a long wire with electrodes on it (an electrode array).

The external processor takes in sound, analyses it and then converts it to signals that are transmitted across the skin to an internal receiver-stimulator, which sends the signals along the electrode array into a part of the inner ear called the cochlea.

The signal is then sent to the brain along the hearing nerve as normal.

This means cochlear implants are only suitable for people whose hearing nerves are functioning normally.

The implants cannot restore normal hearing but they can give a deaf person a good representation of sounds, helping them understand speech.

Whereas hearing aids amplify sound so they can be detected by damaged ears, cochlear implants bypass damaged parts of the ear and directly stimulate the auditory nerve.

Signals generated by the implant are sent via the auditory nerve to the brain, which recognizes the signals as sound.

Hearing through an implant is different from normal hearing and takes time to get used to it.

It allows people to recognize warning signals, understand their environment and enjoy conversations with people.

If a cochlear implant is recommended, it will be inserted into the ear (or both ears) during an operation and switched on a few weeks later.