In certain cancers, there can be cells which disseminate from the tumor into the blood. These are known as “circulating tumor cells”, and can metastasize to secondary sites.

The problem with detecting these is that they are low in number, especially compared to the white blood cells which are present alongside circulating tumor cells in the blood.

The numbers can also vary between patients, therefore approaches to isolate circulating tumor cells may work for some patients but not others.

Another problem is that there can be variations in circulating tumor cells as well, i.e. they can be heterogeneous. This could cause problems, but also, a small number of these heterogeneous tumor cells could carry a specific mutation which would only be seen if the downstream analysis is sensitive enough.

There have been attempts to improve the detection of circulating tumor cells, form using differences in size, antibodies and flow-based approaches. Some approaches have managed to recover 95% of cancer cells, however the white blood cells which remain can cause problems for downstream applications. For example, when looking at the DNA to see if there are mutations in the tumor cells, these could be masked if the number of white blood cells (with unmutated DNA) is high. 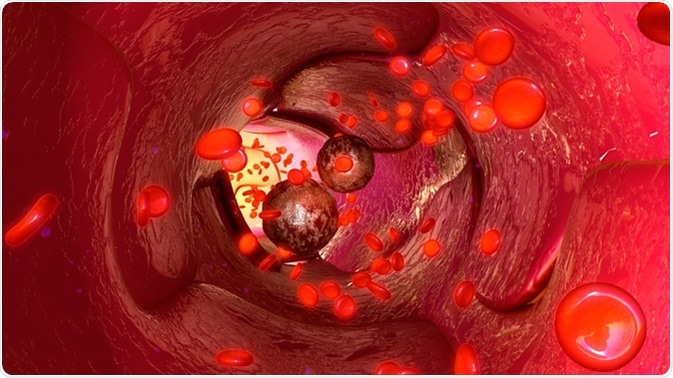 A device was created by Yeo and co., which uses a small fluid based (microfluidic) approach to move single cells into control chambers. First, the incoming cells are forces into a single cell stream. Pressure differences then move the cells from this main stream into the holding chambers. Having a cell enter a holding chamber means that the chamber becomes blocked, and this means that other cells cannot enter that chamber and are directed to another empty chamber instead.

The pressure in a particular holding chamber can then be changed, and this directs the cell occupying that chamber back into the main stream and into the now opened collection port. Cells are sequentially released from the holding chambers, and by the use of methods, such as immunofluorescence, specific cells can be separated from the mixture of cells. To minimize the amount of cells lost in the process and to enhance the detection of target cells, the stream is recycled so that another round of cell capture can be performed.

To optimize the recovery of circulating tumor cells, the authors initially used a mixture small beads to simulate different cells; these were either 15 micrometers (µm, or 15 millionths of a meter) or 20 µm in diameter. They observed that the beads entered the holding chambers sequentially and remained until release mode was activated.

Separating Cells in a Simulated Sample

To detect these two types of cells, the authors used two fluorescence markers; cytokeratin, for MCF-7 cells and CD45 for white blood cells. Cells showing the presence of cytokeratin were moved to the recovery port, while the other cells were directed to the recycling outlet. This way, the white blood cells were actively removed from the sample, leaving behind a pure sample containing only MCF-7 cells.

The authors noted that a sample of around 101,000 cells took around 2-3 hours to be separated, and that at least three cycles were needed to get around 95% of MCF-7 cells. Using five cycles increased the recovery from 95% to 99%.

In to the Clinic?

By having this ability to easily separate out cells from a mixed population, this has the potential to be used in clinic; it can be used to detect what mutations are present in the tumor or a sub-population of the tumor, and this can also be done during therapy to see if any mutations which may lead to treatment resistance emerges. This would mean that treatment can be quickly changed before the tumor has the chance to spread more.

Dr. Maho Yokoyama is a researcher and science writer. She was awarded her Ph.D. from the University of Bath, UK, following a thesis in the field of Microbiology, where she applied functional genomics toStaphylococcus aureus . During her doctoral studies, Maho collaborated with other academics on several papers and even published some of her own work in peer-reviewed scientific journals. She also presented her work at academic conferences around the world.