Many Trial Volunteers Got Placebo Vaccines. Do They Now Deserve the Real Ones?

In October, Judith Munz and her husband, Scott Petersen, volunteered for a coronavirus vaccine trial. At a clinic near their home in Phoenix, each got a jab in the arm.

Dr. Petersen, a retired physician, became a little fatigued after his shot, and developed redness and swelling on his arm. But Ms. Munz, a social worker, didn’t notice any change. “As much as I wanted it, I couldn’t find a darned thing,” she said. “It was a nothing burger.”

She knew there was a 50-50 chance that she would get the vaccine, developed by Johnson & Johnson. Judging from her lack of symptoms, she guessed she had received the placebo.

At the time, Ms. Munz thought that anyone who had received the placebo would get the real vaccine as soon as the trial showed it was safe and effective. She looked forward to the peace of mind it would bring. But last month, she was asked to sign a modified consent form indicating that people who got the placebo might have to wait up to two years to get the vaccine, if they got one at all.

Ms. Munz found the form vague, confusing and, most of all, unfair. “You put yourself out there with that risk,” she said. “I am owed that vaccine.”

As state and federal governments prepare to distribute the first coronavirus vaccines to health care workers and nursing home residents later this month, the tens of thousands of people who received placebo shots in trials have become the subject of a thorny debate among experts.

Some scientists agree with Ms. Munz that, if she indeed received a placebo, she should be moved toward the front of the line in exchange for her service for the greater good. “I think probably we owe them, as a consequence of their participation in the trial, some special priority in terms of access to the vaccine,” Dr. Francis S. Collins, the director of the National Institutes of Health, said at a meeting in July.

But on Wednesday, 18 leading vaccine experts — including a top regulator at the Food and Drug Administration — argued that vaccinating placebo groups early would be disastrous for the integrity of the trials. If all of the volunteers who received placebo shots were to suddenly get vaccinated, scientists would no longer be able to compare the health of those who were vaccinated with those who were not.

“If you’re going to prioritize people to get vaccinated, the last people you should vaccinate are those who were in a placebo group in a trial,” said Richard Peto, a medical statistician at the University of Oxford. Mr. Peto and his colleagues laid out their concerns in a new commentary in The New England Journal of Medicine.

Placebos have been essential to clinical trials for decades. It’s vital that neither the volunteers nor the staff running the trial know who is randomly assigned to get the vaccine or the placebo. This “blinding,” as it’s called, eliminates the chance that people will behave differently depending on which treatment they get, potentially skewing the trial’s results.

Yet the prospect of giving people something useless in the face of a life-threatening disease has always been fraught. Even Jonas Salk balked at the idea of giving people placebos when researchers designed a trial to test his new polio vaccine in 1953.

“I would feel that every child who is injected with a placebo and becomes paralyzed will do so at my hands,” he complained. The study, Dr. Salk declared, “would make Hippocrates turn over in his grave.”

But Dr. Salk lost that fight, and the placebo-controlled trial went forward. It clearly demonstrated that the polio vaccine was safe and effective. Only when the trial was over did the children who received the placebo get the vaccine — along with millions of other children. 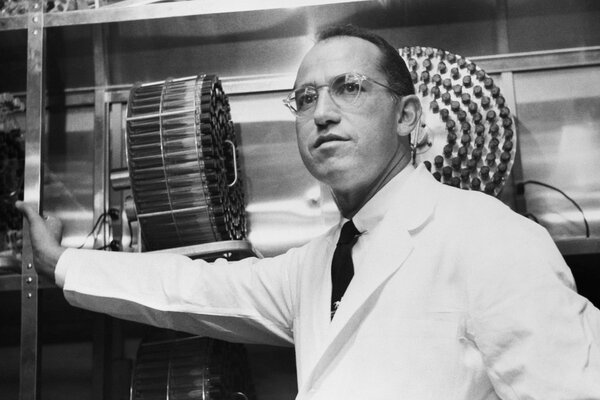 Given the stakes of the Covid-19 pandemic, the F.D.A. has agreed to consider a faster, but limited approval, known as an emergency use authorization, based on early results from clinical trials. The agency said in new vaccine guidelines published in October that such an authorization would not necessarily be grounds for unblinding a trial.

But the debate is far from over. In an October statement, Pfizer said that it “would have an ethical responsibility to inform all study participants about the availability of an emergency authorized vaccine.” The company said it would propose to the F.D.A. that volunteers who got the placebo could get the real vaccine. Amy Rose, a spokeswoman for Pfizer, said this week that its position hadn’t changed.

In their new paper in The New England Journal of Medicine, Mr. Peto and his colleagues argue that once a placebo group disappears from a clinical trial, the chance to collect rigorous data about a coronavirus vaccine will vanish.

Preliminary results don’t reveal how long a vaccine’s protection will last, for example. It’s possible that the immunity provided by a vaccine can fade over the course of months. That decline would lead to an increase in the rate of vaccinated people getting sick as compared with the placebo group. Scientists would most likely see that trend if they can keep a vaccine trial intact.

“It is clear that there is early protection, and I suspect there will be protection for quite a long time afterward,” Mr. Peto said. “But I think that we will be much better as a planet if we get clear evidence of this.”

If the companies were to encourage unblinding their trials, that could also harm their chances of receiving the F.D.A.’s full stamp of approval — a license. And allowing a trial to continue may also be good for their bottom line, because knowing when immunity from a vaccine begins to wane will dictate how frequently people will need their product.

Dr. Anthony S. Fauci, the director of the National Institute of Allergy and Infectious Diseases, said that the ethical case for giving the vaccine to people like Ms. Munz was more compelling now that the vaccines had turned out to work surprisingly well.

The Road to a Coronavirus Vaccine

Words to Know About Vaccines

Confused by the all technical terms used to describe how vaccines work and are investigated? Let us help: