MALDI-TOF (matrix-assisted laser desorption/ionization time-of-flight) mass spectroscopy is a form of molecular analysis that can be used in forensic investigation to identify remains and estimate the postmortem interval.

MALDI-TOF is known for its high sensitivity and precision, making it an increasingly popular method in forensic science. 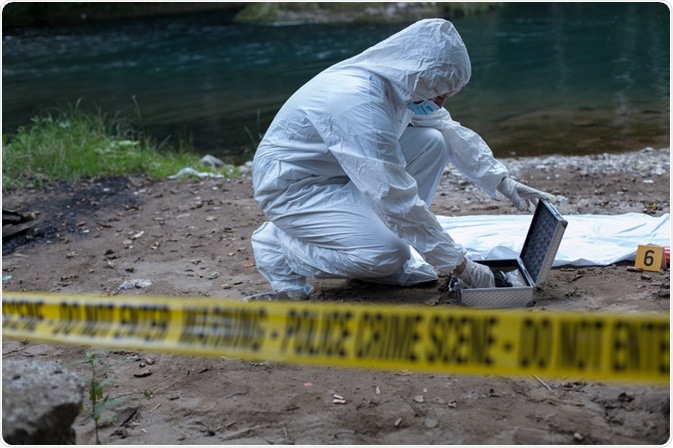 MALDI was introduced in the 1980s and has since then been applied to a broad range of life sciences, such as medicine and archeology. MALDI imaging allows for simultaneous and direct analysis of endogenous and exogenous molecules in various tissues.

For example, MALDI imaging mass spectroscopy can be applied to proteins characteristic of certain diseases without using target-specific reagents, thereby allowing searches for hundreds of analytes at once. MALDI-TOF can also be applied to genetic information, such as single nucleotide polymorphisms (SNPs).

Changes to bodies after death, such as rigor mortis, form the bases for estimating the time of death but have been limited by imprecise estimations. MALDI-TOF presents a new method by which PMI can be estimated. Internal organs begin to decay in different time-dependent ways, which means signals will vary by organs.

The MALDI-TOF approach, compared to more traditional methods, uses molecular images and multivariate analyses that can be invaluable for estimating intermediate PMIs. Where applied, MALDI-TOF has found decreasing levels of proteins and peptides in human livers as time passes, consistent with histological changes. Simultaneously, other proteins and peptide markers increased in intensity with decay.

Some of the protein markers identified with MALDI-TOF for PMI estimation were Rho, GTPase-activating protein 24, amine oxidase, and small vasohibin-binding protein. However, there are some drawbacks to this approach. Because decay occurs relatively quickly, few or no peaks were remaining to be identified 144 hours after death.

Further limitations include the preparation process, which must be carried out quickly with no contamination. Furthermore, factors such as variable temperatures may influence decay speed and this the time at which markers disappear.

The identification of individuals in forensic science is often done based on repeat sequences in nuclear DNA and mitochondrial DNA sequences but can also be done by SNPs. SNPs are often beneficial because they can be detected in degraded or otherwise poor samples, as is often the case with forensic samples.

One of the approaches to measuring SNPs is through MALDI-TOF, which analyzes the primer extension (PEX) after the genetic sample has been amplified. This is also sometimes referred to as minisequencing. Where tested, MALDI-TOF has been shown to have high precision and throughput when applied to paternity and identification markers.

The main drawbacks of this approach include the high price of MALDI-TOF instruments and the detailed multi-step purifications that need to be carried out before MALDI-TOF when PEX is used.

There is also some theorizing that MALDI-TOF can uniquely provide information on a criminal’s state at the time of a crime. Substances that are produced normally in bodies and present in fingermarks or substances that are being excreted through sweat or have come in contact with fingermarks can be detected with MALDI-TOF and may offer some background.

This criminal profiling, called chemical criminal profiling, aims to show information such as actions before a crime, sex, age, and possibly location during the crime. MALDI-TOF can also be used to identify specific substances, such as blood, to a better degree than many other methods because it directly measures the heam group in blood.

However, there are concerns that this method may only provide circumstantial evidence rather than true molecular evidence. For example, there are several innocent ways a person can end up with similar chemical profiles as a guilty person, such as by using similar products or moving in similar areas.