Losing just two hours of sleep makes you ANGRIER: Study uncovers the first proof between irritability and a lack of shut-eye

Losing just two hours of sleep each night can make you angrier, a new study has revealed.

It is the first time a direct link has been proven between irritability and lack of shut-eye, according to psychologists.

However, researchers at Iowa State University wanted to confirm the link between between lack of sleep and anger. 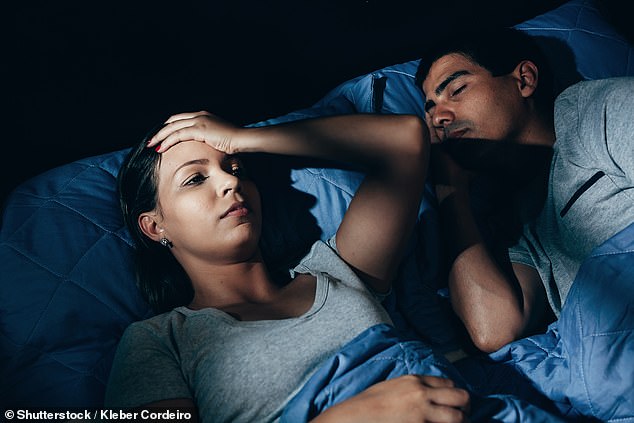 A lack of sleep – even two hours a night – can make a person more angry, researchers at Iowa State University found. Sleep deprivation is already linked to negative emotions

The findings, based on dozens of volunteers, come amid warnings that both Britain and the US is in the middle of a sleep epidemic.

Researchers wanted to discover if sleep loss is to blame for anger, or if anger is responsible for disrupted sleep.

The study, published in the Journal of Experimental Psychology. split 42 participants into two groups.

One kept to their normal sleep routine, while the other had theirs cut by two to four hours each night for two nights.

The first group had almost seven hours of sleep a night, while the second group got about four-and-a-half hours, meant to reflect general society.

Before and after, participants were asked to rate different products while listening to irritable noise – similar to the sound of spraying water.

Insomnia means you regularly have problems sleeping. It usually gets better by changing your sleeping habits.

You have insomnia if you regularly: find it hard to go to sleep, wake up several times during the night, lie awake at night, wake up early and can’t go back to sleep, still feel tired after waking up

Everyone needs different amounts of sleep. On average, adults need 7 to 9 hours, while children need 9 to 13 hours.

You probably don’t get enough sleep if you’re constantly tired during the day.

The most common causes of insomnia are: stress, anxiety or depression, excessive noise, an uncomfortable bed or alcohol, caffeine or nicotine.

Insomnia usually gets better by changing your sleeping habits. For example, going to bed and waking up at the same time every day, and only going to bed when you feel tired.

The researchers wanted to make the participants feel uncomfortable and provoke anger.

Study leader Professor Zlatan Krizan said: ‘In general, anger was substantially higher for those who were sleep restricted.

‘We manipulated how annoying the noise was during the task and, as expected, people reported more anger when the noise was more unpleasant.

‘When sleep was restricted, people reported even more anger, regardless of the noise.’

Tiredness accounted for 50 per cent of the experimental effect of sleep restriction on anger, the researchers calculated.

This suggested individuals’ sense of sleepiness may point to whether they are likely to become angry. And it’s not just in-the-moment anger, either.

Professor Krizan said: ‘Despite typical tendencies to get somewhat used to irritating conditions – an uncomfortable shirt or a barking dog – sleep-restricted individuals actually showed a trend toward increased anger and distress, essentially reversing their ability to adapt to frustrating conditions over time.

He added: ‘No one has shown this before.’

Now, the researchers want to demonstrate whether the experimental evidence in the lab extends to daily life.

They are collecting data to assess whether sleep loss can cause actual aggressive behaviour towards others.

Figures from the Royal Society for Public Health estimate that the average person sleeps for 6.8 hours a night.

Routinely sleeping less than six or seven hours a night demolishes your immune system and is linked to a greater risk of cancer.

More than 40million people suffer from long-term sleep disorders in the US, data from the CDC shows. While it is estimated there are 1.5million patients in the UK.