WASHINGTON — An independent panel advising the Centers for Disease Control and Prevention voted Tuesday to recommend that residents and employees of nursing homes and similar facilities be the first people in the United States to receive coronavirus vaccines, along with health care workers who are especially at risk of being exposed to the virus.

The panel, the Advisory Committee on Immunization Practices, voted 13 to 1 during an emergency meeting to make the recommendation. The director of the C.D.C., Dr. Robert R. Redfield, is expected to decide by Wednesday whether to accept it as the agency’s formal guidance to states as they prepare to start giving people the shots as soon as two weeks from now.

“We are acting none too soon,” said Dr. Beth Bell, a panel member and global health expert at the University of Washington, noting that Covid-19 would kill about 120 Americans during the meeting alone.

States are not required to follow the panel’s recommendations, but they usually do. The final decision will rest with governors, who are consulting with their top health officials as they complete distribution plans.

The new recommendation is the first of several expected from the panel over the coming weeks, as vaccines developed by Pfizer and Moderna go through the federal approval process, on the thorny question of which Americans should be at the front of the long line to get vaccinated while supply is still scarce. The panel described it as an interim recommendation that could change as more is learned about how well the vaccines work in different age groups and how well the manufacturers keep up with demand.

The roughly three million people living in long-term care and those who care for them are a relatively clear target; 39 percent of deaths from the coronavirus have occurred in such facilities, according to an analysis by The New York Times. But states and health systems will ultimately have to decide which of the nation’s 21 million health care workers should qualify to receive the first doses, as there won’t be enough at first for everyone.

Pfizer and Moderna have estimated that they will have enough to vaccinate, at most, 22.5 million Americans by year’s end, with the required two doses, a few weeks apart. The C.D.C. will apportion the supply among the states, with the initial allocation proportional to the size of each state’s adult population.

The only member of the committee to vote against the recommendation was Dr. Helen Talbot, an infectious-disease specialist at Vanderbilt University, who expressed discomfort with putting long-term-care residents in the first priority group because the vaccines’ safety had not been studied in that particular population. “We enter this realm of ‘we hope it works and we hope it’s safe,’ and that concerns me on many levels,” she said before the vote.

But most panel members who offered opinions said they thought the high death rate among that group made it imperative to include it.

Dr. José Romero, the chairman of the panel, said that he felt strongly that its process had adhered to its core principles: “maximizing benefit and minimizing harm,” promoting justice and addressing health inequities. Dr. Beth Bell, the co-chair, acknowledged that all of the members would have liked more data from clinical trials but said that because of the pandemic emergency, “we need to act.”

The panel, whose 14 voting members have expertise in vaccinology, immunology, virology, public health and other relevant fields, has hinted that the next priority group it will recommend for vaccination — “Phase 1b” — will be so-called essential workers, a huge group numbering more than 85 million. A division of the Department of Homeland Security has come up with a list of workers states should consider counting in that group; it includes teachers and others who work in schools, emergency responders, police officers, grocery workers, corrections officers, public transit workers and others whose jobs make it hard or impossible to work from home. 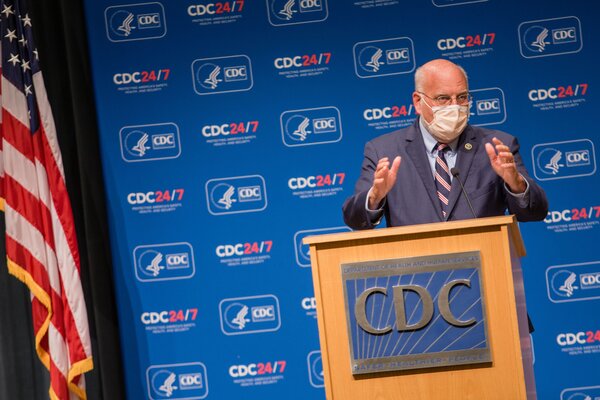 After essential workers, the committee is leaning toward recommending vaccination of adults with medical conditions that put them at high risk of coronavirus infection, such as diabetes or obesity, and everyone over 65. But some states might diverge to an extent, possibly choosing, for example, to vaccinate residents over 75 and then some types of essential workers.

All other adults would follow the initial groups. The vaccine has not yet been thoroughly studied in children, so people under 18 would not be eligible yet.

For at least a month or two, there will not be nearly enough vaccine to cover everyone in the initial groups. Dr. Moncef Slaoui, who leads the Trump administration’s Operation Warp Speed, said Tuesday morning in an interview with The Washington Post that Pfizer and Moderna would be able to provide an additional 60 to 70 million doses in January “if all goes well.” Since each person gets two shots, that would only be enough for 55 million people at most through the end of January — about 22 percent of the nation’s roughly 255 million adults.

Production will continue to increase in February and March, Dr. Slaoui said, with the hope that two new vaccines, from AstraZeneca and Johnson & Johnson, will gain F.D.A. approval.

“So very quickly, we start having more than 150 million doses a month in March, April, May,” he added. He and other federal officials have said that the general public is likely to be able to be vaccinated by May or June.

The Road to a Coronavirus Vaccine

Words to Know About Vaccines

Confused by the all technical terms used to describe how vaccines work and are investigated? Let us help: