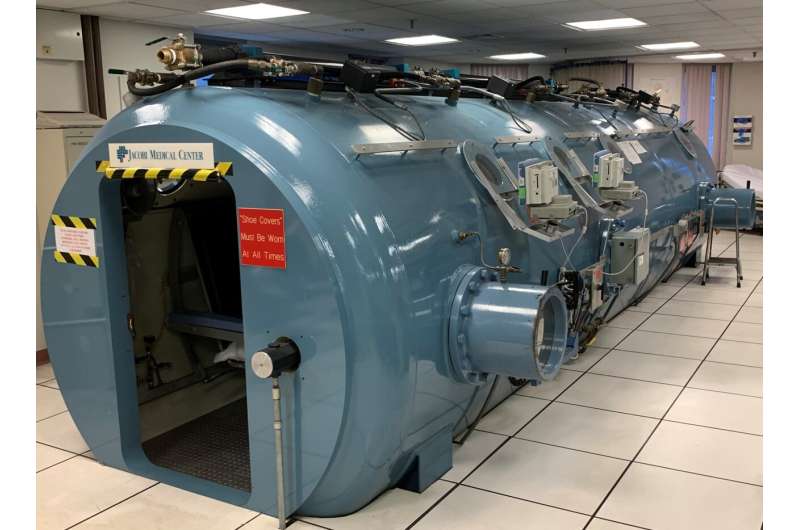 A new long COVID study will likely provide hope for the millions of people suffering from the debilitating condition, as researchers on Tuesday revealed that hyperbaric oxygen therapy is the key to a long COVID treatment.

The study included 73 long haulers with post-COVID-19 cognitive symptoms, such as brain fog, inability to concentrate, forgetfulness and difficulty recalling desired words or thoughts. These symptoms had persisted for more than three months following a confirmed virus infection—a crippling condition that affects up to 30% of COVID patients.

Those who received the hyperbaric oxygen had 40 daily treatment sessions—five sessions per week within a two-month period. The patients entered a hyperbaric oxygen chamber, and breathed 100% oxygen by mask at twice the atmospheric pressure at sea level, for 90 minutes with oxygen fluctuations.

Participants who received only the placebo treatment did not experience significant improvement in their persistent long COVID symptoms.

The study was conducted by the Sagol Center for Hyperbaric Medicine and Research at Shamir Medical Center and Tel Aviv University.

“The study revealed that HBOT (hyperbaric oxygen therapy) can induce structural and functional repair of the damaged regions of the brain and improve the cognitive, behavioral and emotional function of the unfortunate patients suffering from post-COVID-19 conditions,” said Shai Efrati, the research group leader and director of the Sagol Center and chair of Aviv Scientific’s Medical Advisory Board.

Earlier this year, Efrati and others published a single case report about hyperbaric oxygen treatment for a long hauler. In the article, the scientists reported how a previously healthy, athletic 55-year-old man who suffered from long COVID was treated successfully with hyperbaric oxygen therapy.

When it came to the man’s physical improvement, there was a 34% increase in his maximum rate of oxygen consumed during exercise and a 44% improvement in forced vital capacity.

“We report the first case of successfully treated long COVID symptoms with hyperbaric oxygen therapy with improvements in cognition and cardiopulmonary function,” the scientists wrote earlier this year. “The beneficial effects of hyperbaric oxygen shed additional light on the pathophysiology of long COVID. As this is a single case report, further prospective randomized control studies are needed.”