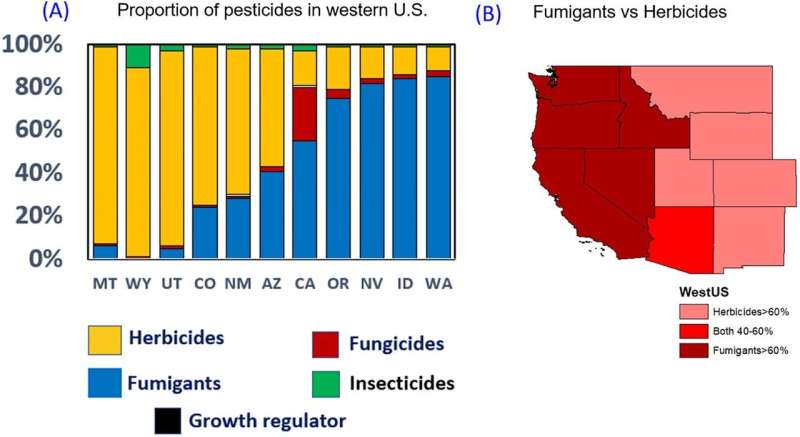 Around the world, farmers each year coat their fields in hundreds of millions of pounds of herbicides, insecticides, fungicides, and fumigants. These chemical treatments effectively take care of crop-damaging pests, but many have negative side effects for people and other animals in the ecosystem. Over the past half century, many pesticides, such as DDT, have been banned because of their health and environmental impacts. However, farmers in the United States still use dozens of chemicals that have been outlawed in other countries.

Previous studies have found a likely link between cancer rates and some of the pesticides still applied today. Most of this research, however, has focused on specific case studies of exposed agricultural workers. Naveen Joseph and a research team study how simply being at risk of pesticide exposure affects people’s health. The team looked at cancer and pesticide data across the 11 westernmost U.S. states to see whether any connections might emerge between higher cancer rates and the use of certain types of agricultural chemicals.

The study, published in GeoHealth, revealed a connection between cancer rates and fumigants. The higher the mass of fumigants applied in a region, the higher the rate of pediatric cancer. Two widely used soil fumigants—metam sodium and metam potassium—were also linked to an overall higher prevalence of cancer. The carcinogenic influence of metam salts could happen after their application to the soil, when they break down into more toxic chemicals and spread through the air. Conversely, researchers did not find a connection between cancer risk and amount of herbicide applied.