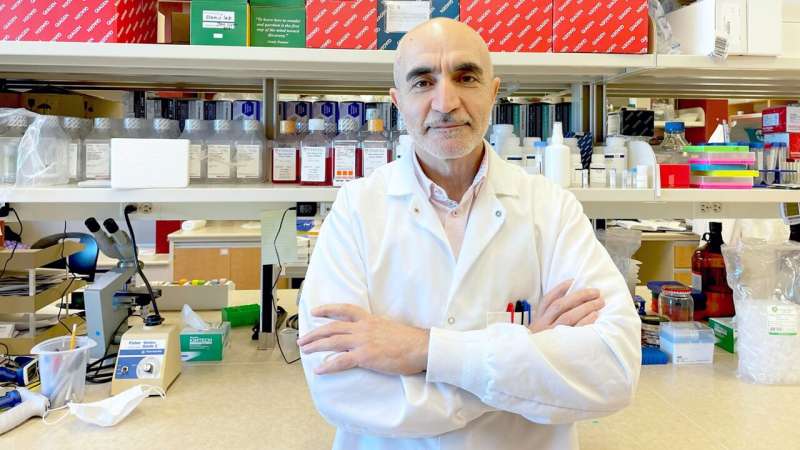 In a groundbreaking study of people living with HIV, University of Alberta researchers found that elusive white blood cells called neutrophils play a role in impaired T cell functions and counts, as well as the associated chronic inflammation that is common with the virus.

Neutrophils are a foundational part of the body’s immune system and the most abundant type of white blood cell, making up about 60 to 80 percent of circulating immune cells in the blood. However, unlike other types of white blood cells, neutrophils are extremely short-lived and cannot be frozen and thawed like other immune cells, making them extremely difficult to examine, said study lead Shokrollah Elahi.

“Neutrophils live for hours to a day or two maximum,” Elahi said. “The body produces a lot of neutrophils, and they do their job and then they die and have to be regenerated in the bone marrow. But despite the fact that neutrophils are the most abundant white blood cells in the blood circulation, their role in the context of HIV has not been very well defined.”

In the study, published in the journal PLOS Biology, Elahi and his team examined the fresh blood of 116 people living with HIV and 60 individuals without the virus. They ran comprehensive sequencing on all the genes expressed in the neutrophils from both groups to determine any differences between them.

“We found that not all HIV-infected individuals have similar types of neutrophils,” said Elahi. “As the HIV disease progresses, neutrophils become more activated and more potent, and in turn activate the body’s T cells, which likely causes some of the problems associated with HIV infection such as inflammation and rapid aging.”

Elahi, a member of the Women and Children’s Health Research Institute, the Cancer Research Institute of Northern Alberta and the Li Ka Shing Institute of Virology, said neutrophils act like an early alarm system. When they detect a dangerous entity such as an invading microbe, they release proteins to signal other immune cells to the danger. This activation can be high or low, or more or less potent, depending on the severity of the danger and the reaction of other immune cells.

The role of galectin-9

One of the proteins released by neutrophils is galectin-9, which Elahi previously linked to severe inflammation and cytokine storms in COVID-19 patients. Elahi’s team reported that when neutrophils sense a danger such as an infection, they become stressed and release the galectin-9. As the protein begins to saturate the blood, it can interact with different immune cells. For example, the team found that galectin-9 reacted strongly with T cells and made them more susceptible to HIV infection, causing a cascading effect that leads to a hyper-immune response and inflammation.

Elahi’s prior work showed that patients with HIV and some forms of cancer showed elevated levels of galectin-9 in their blood. However, in this latest study he was able to identify the major source of the protein.

“We found for the very first time that the neutrophil membrane, through a complex mechanism, is covered like a blanket with galectin-9,” he said. “When neutrophils become highly activated, the secretion of galectin-9 can activate T cells through interaction with another molecule called CD44, which then promotes chronic inflammation in HIV patients.”

Elahi’s study of neutrophils revealed that the “alarm” reaction of shedding proteins such as galectin-9 was associated with oxidative stress, a state in which the body is unable to naturally detoxify or remove certain oxygen-containing molecules that become harmful to cells. Oxidative stress is believed to play a role in the development of diseases including Parkinson’s, Alzheimer’s, cancer, heart failure and autism.

Based on his findings, Elahi said preventing galectin-9 shedding might be a powerful tool in reducing many of the negative effects of HIV infection. His team has already made some progress in reducing oxidative stress by using an organic antioxidant compound called phloretin and vitamin C.

“We have been looking at phloretin and vitamin C in the lab and our data are very promising,” Elahi said. “We know that both are good at reducing galectin-9 shedding, so we believe they can prevent the hyper-activation of neutrophils. We hope that our results will spark renewed investigation into the role of neutrophils in T cell activation in other acute and chronic conditions.”

Elahi noted the study reinforces that the most important thing for people who are living with HIV or are at risk of catching the virus is to get a screening test as soon as possible.