Should brain training be part of a healthy diet? Children’s minds use half their energy – and more mental activity might cut obesity risks, scientists say

Young children’s brains take up nearly half the energy they get from calories – and keeping their minds active may help fight childhood obesity, scientists suggest.

Too often, we think of the brain and body as separate entities, and consider the body’s activities – exercise, walking and so forth – the ones that demand energy.

But a 2014 study showed that five-year-olds’ brains gobble up twice as much glucose – the component of food we convert to energy – as an adult brain.

Now, the same research team, from Northwestern University and New York University  (NYU) think that differences in how much energy young children’s brains use may play a role in their varying obesity risks, according to their new study. 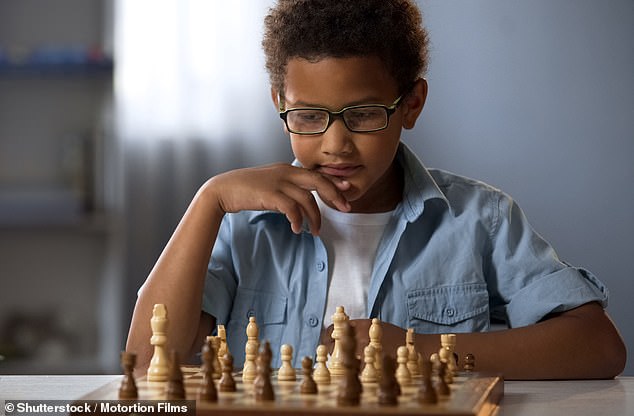 Keeping children’s minds active may help keep them trim too, because the brain takes up so much of the energy we derive from food, scientists suggest in a new paper

Human babies grow like weeds in the womb, far outpacing our chimpanzee cousins.

But chimp ‘children’ grow far faster after birth, while human children take much longer to reach the same size.

According to prior Northwestern research, that’s because children’s brains are taking up so many of the calories they’re consuming.

This is never more true than at age five, when two-thirds of the energy a child burns through while they are sitting still is devoted to feeding their brains.

Our evolution has optimized our bodies for brain power, but not so much for fitness.

In fact, the way we walk, the fact that we cook and even the shape and size of our guts mean that we have a bigger backup supply of fat and energy for our brains to draw upon, but we’re less likely to walk, run or fight the excess off.

This all made the Northwestern and NYU research team wonder if differences in how active children’s brains are might help explain why some become obese and others don’t.

We know that genetics, diet and physical activity explain a lot of our obesity risks, especially early in life.

But they don’t explain everything.

And working out the missing components may be the skeleton key to keeping kids from getting fat – significantly raising the odds that they’ll be fat adults with myriad health risks.

So the scientists behind the new hypothesis suppose that how when and with what intensity the brain is developing in children might be predictive.

It’s just a theory, for now, but if further research bears it out, it may explain childhood obesity disparities and give a us a two-for-one tool to fight obesity.

While other tissues and organs use alternative sources to glucose, the brain relies almost entirely on glucose to fuel it.

And the American diet, in particular, tends to be high in sugar and carbohydrates – both of which convert to usable glucose in the body.

But when we eat more of these than we need for energy, fat cells act like storage containers for the excess, absorbing what’s leftover.

So, if the brain is more active, then more of that glucose might, in theory, be able to get used up before fat cells get to it.

‘We believe it plausible that increased energy expenditure by the brain could be an unanticipated benefit to early child development programs, which, of course, have many other demonstrated benefits,’ said study co-author and Northwestern anthropologist, Dr Christopher Kuzawa.

‘That would be a great win-win.’