The purveyors of Strawberry Milk, Peach Madness and Froopy (tastes like Froot Loops) e-cigarette pods are having a very good year.

After Juul Labs, under pressure from the Food and Drug Administration, stopped selling most of its hugely popular flavored nicotine pods in stores last fall, upstart competitors swooped in to grab the shelf space. Trumpeting their own fruity and candy-flavored pods as compatible with Juul devices, they have seen their sales soar.

The proliferation of “Juul-alikes” is not only complicating Juul’s efforts to clean up its tarnished image, but also shows just how entrenched the youth vaping problem has become and that voluntary measures are unlikely to solve it.

When Juul agreed to discontinue store sales of its fruit and dessert flavors, it said it would continue selling them online and strengthen the age verification process on its website.

“If Juul’s voluntary actions were working, youths would not still be using their products at epidemic rates,” said Chris Bostic, deputy director for policy of Action on Smoking & Health. “We can’t rely on the companies alone to self-regulate. That’s where the government needs to step in.”

Exactly how willing the Trump administration is to step in is up in the air. In the last few weeks of his tenure at the F.D.A., the former commissioner Scott Gottlieb issued a proposal requiring that stores sequester flavored e-cigarettes, except menthol, mint and tobacco, to areas off limits to minors. Retailers, among them convenience stores and gas stations, would be expected to verify the age of their customers.

But the details of the proposal were vague, and with Dr. Gottlieb’s departure, it’s unclear how federal policy might change, although Acting Commissioner Norman E. Sharpless has said he is working on finalizing the plan and supported Dr. Gottlieb’s e-cigarette crackdown.

Juul has filed numerous lawsuits, and complaints with the International Trade Commission, seeking to beat back the cheaper copycat devices and pods.

“If the box isn’t around, the parent would say it’s a Juul pod, but it’s not us,” said Matthew Hult, a Juul lawyer. “It injects confusion and tarnishes the Juul brand.”

The company is also targeting sellers of counterfeit vaping devices and pods sold under the Juul name, and training federal customs officials to catch them at ports of entry.

Juul said its concern was less about losing market share than about further damaging its reputation at a time when the company is trying to convince the public that it really does not want minors to vape, and that it is working to prevent them from doing so. 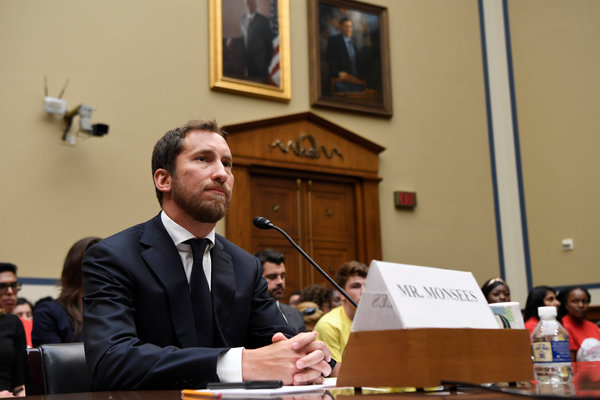 In the past few months, Juul has spent millions of dollars to run numerous full-page advertisements in newspapers — including The New York Times, The Washington Post and The Wall Street Journal — and digital news organizations like Politico and Axios. The somber black and white, text-only displays blast messages like, “IT’S TIME TO RAISE THE LEGAL AGE TO PURCHASE TOBACCO PRODUCTS, INCLUDING VAPOR, FROM 18 TO 21.”

But as the company pushes back against other companies’ flavor pods, Juul says it still has the legal right, under F.D.A. rules, to bring back dozens of its own sweet flavors that it once sold in very limited release. They include varieties of watermelon, strawberry and melon, which competitors are already selling, as well as specially designed concoctions: Coconut Bourbon, Elderflower Fizz, Mimosa and Thai Tea, and others.

In April, Juul told Congress it had no intention of bringing those flavors back in the United States.

Juul’s vaping products have been on the market only since 2015, but the sleek devices, sometimes called “the iPhones of e-cigarettes,” have become so popular, particularly with young people, that the company now has more than 70 percent of the e-cigarette market. Many public health and school officials believe Juul’s early marketing campaigns, which highlighted the “coolness” of the devices, helped make them fashionable with teenagers and led to rising nicotine addiction among young people who had never smoked. The F.D.A. and some state attorneys general are investigating the company’s marketing practices.

The company has filed patent infringement claims against 21 manufacturers and sellers of copycat devices and pods.

Most of those companies agreed to stop selling their similar products, but three did not, according to Juul: Eonsmoke, based in New Jersey, which uses factories in China; Ziip, based in China; which makes many different brands of nicotine pods and devices; and Vapor4Life, an Illinois-based seller of pods, devices and other goods.

“We are taking aggressive actions against counterfeit and compatible products because they are a direct threat to our plan to combat youth usage,” said Joshua Raffel, a Juul spokesman.

He also said that Juul had sent 278 cease-and-desist letters related to counterfeit or illegal products.

Eonsmoke is one of Juul’s growing rivals. Juul’s removal of its creme, cucumber, fruit and mango flavors from stores gave Eonsmoke’s fortunes a big boost. In 2018, Eonsmoke generated an estimated $5.3 million in revenue based on sales tracked by Information Resources Inc., which analyzes retail spending. This year, the company’s business has soared, with an estimated $43.6 million in tracked sales as of mid-July.

Stephen Lobbin, an Eonsmoke lawyer, said the company’s nicotine pods are designed for adults, and that people under 18 are not permitted to buy them in stores or online.

“There are things that may harm you and we allow that in our society, because we favor personal responsibility over the nanny state,” he added.

But teenagers are still getting their hands on them.

Phillip Fuhrman, a 16-year-old New Yorker whose mother is a co-founder of Parents Against Vaping e-cigarettes, said Eonsmoke’s wide range of flavors was a big draw for minors.

“A lot of my friends use the blueberry,” Phillip said in an interview. “People use the mango because it’s somewhat similar to the Juul mango.”

Aside from being cheaper than Juul’s products and available in more flavors, Eonsmoke also offers another attraction, Phillip said — some of the company’s pods come with levels of nicotine higher than any Juul sells.

“Some of my friends use Eon pods because they have a higher nicotine percentage, because they want a bigger head rush,” Phillip said. “If you’re Juuling every single day, you aren’t going to get as much of a head rush.”

Eonsmoke is under investigation by both the F.D.A. and the attorney general of Massachusetts.

In May, the Massachusetts attorney general, Maura Healey, filed suit against Eonsmoke, accusing it of targeting its vaping products to young people through marketing and advertising intended to appeal to youth. The state also alleged that Eonsmoke failed to verify the ages of its online buyers. As a result of a cease-and-desist letter sent in September 2018, Eonsmoke no longer sells its products online to Massachusetts residents.

Eonsmoke and the other companies deny targeting minors.

Eonsmoke argues that Juul’s patents are invalid. “Juul has tweaked some very simple standard ways to basically heat up and vaporize a liquid and puff on it,” Mr. Lobbin said. “They haven’t figured out a way to get to Mars.”

Ziip, which designs and manufactures dozens of different flavor pods and devices is also under investigation by the F.D.A., which said that it, like Eonsmoke, might have products on the market illegally.

Like Eonsmoke, Ziip claims that Juul’s technology is either the same or very close to what was previously invented, invalidating its patents.

“Juul is trying to gain a virtual monopoly over the e-cigarette industry in the United States,” said Steven Susser, a lawyer for Ziip. He also blamed Juul’s marketing practices for putting the industry under a microscope.

“All Ziip wants to do is to offer a less expensive, and what it believes to be a better quality, alternative,” he said. Ziip sells dozens of Juul-compatible flavors including Froopy, Iced Pina Colada, Cinnamon Roll and Strawberry Lemonade.

In documents filed with the trade commission, Juul called its vaping system “a runaway success” and said that the devices and nicotine pods manufactured and sold by the accused companies were based on stolen intellectual property. Juul also raised questions about its competitors’ quality control, although in an interview it did not give any specific examples of problems.

Melanie Milin, co-founder of Vapor4Life, said her company had always told prospective customers not to start vaping if they don’t already smoke. The company offers products in a range of nicotine levels to encourage people who vape to taper off and quit.

The showdown has stirred up mixed feelings among the tobacco-control crowd.

“It is hard to root for Juul in a corporate fight about who profits from nicotine addiction,” Mr. Bostic said. “But from a purely public health perspective, an I.T.C. decision in their favor would at least get some products aimed at children off the market. All of these should be banned, and a growing number of jurisdictions are doing just that.”