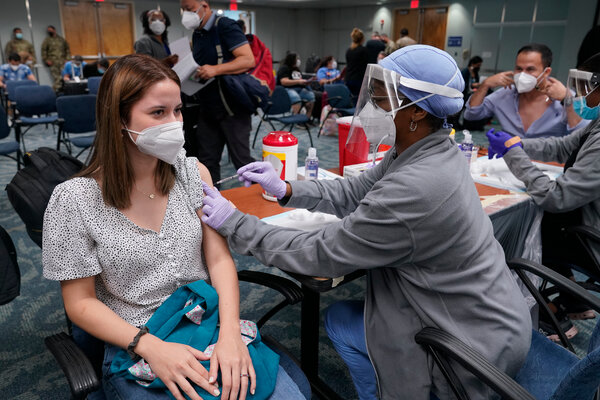 The Johnson & Johnson coronavirus vaccine is effective against the highly contagious Delta variant, even eight months after inoculation, the company reported on Thursday — a finding that should reassure the 11 million Americans who have gotten the shot.

The vaccine showed a small drop in potency against the variant, compared with its effectiveness against the original virus, the company said. But the vaccine was more effective against the Delta variant than the Beta variant, first identified in South Africa — the pattern also seen with mRNA vaccines.

Antibodies stimulated by the vaccine grow in strength over time, researchers also reported.

The results were described in a news release, and the company said that both studies had been submitted for online publication on Thursday. One of those studies has been accepted for publication in a scientific journal. Both studies are small, and the researchers said they had released the results early because of intense interest from the public.

“The coverage of the variants is going to be better than what people anticipated,” said Dr. Dan Barouch, a virologist at Beth Israel Deaconess Medical Center in Boston. “There was a lot of misinformation that was spreading, so we decided that we needed to get this into the public domain right away.”

The intense discourse about Delta’s threat has left even people who are immunized feeling anxious about whether they are protected. The variant, first identified in India, is much more transmissible than earlier versions of the virus, and its global spread has prompted new health restrictions from Ireland to Malaysia.

In the United States, the variant now accounts for one in four new infections. Public health officials have said the vaccines authorized in the United States work against all existing variants, but the data are mostly based on studies of the mRNA vaccines made by Pfizer-BioNTech and Moderna.

That left some people who received the Johnson & Johnson vaccine asking, What about us?

The frustration was building even before the Delta variant emerged. The Centers for Disease Control and Prevention’s guidance that vaccinated people could forgo masks indoors in many situations, for instance, was based mostly on data for mRNA vaccines. And reports of a cluster of infections among players on the Yankees baseball team who had received the J.&J. shot did nothing to assuage fears that the vaccine might be inferior to others.