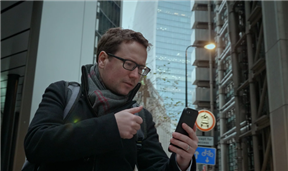 When Dublin accountant Thomas Mulloy took a gap year after college, he ventured to places that many dream of.

With a group of friends, he started off in Russia, made his way into Mongolia and China, down through south east Asia, and on to Australia. A trip of a lifetime. And perhaps all the more impressive because Thomas is deaf.

But being deaf has never held the 35-year-old back. If anything, it helped him on his travels, because he was already fully prepared for language barriers.

“It wasn’t particularly difficult to travel, no,” he tells Independent.ie. “I had travelled a few times prior to that, and because sign language is our first language we have the advantage of using gestures and expressions to communicate, and that’s what we needed to travel.”

Thomas, who works as a chief accountant in London, managing a team whom he communicates with through sign language interpreters, is blazing a trail in London. The city, he says, has given him ample opportunities.

Tonight, he features in RTE’s documentary, London Calling, which tells the story of five Irish deaf people who are unemployable in Ireland and have moved to the UK, where their deafness is not an issue for employers.

While some have settled there, others long to return home to their families. Their choice is between a successful career in London or a disability payment or dole queue in Ireland, they say.

In the UK, the “Access to Work” fund ensures that people with disabilities have full access to employment. They can access up to £57,000 a year to pay to have a sign language interpreter in work with them every day. There is no comparable scheme in Ireland.

When Thomas graduated with a BSc in Computer Science and Mathematics, he began to look for graduate roles in Ireland and the UK which would include a traineeship in chartered accounting.

“I started applying for graduate jobs, mostly in London, because I knew I’d have better supports and the attitude [of employers] was better compared to that of Dublin. Having said that, I did apply for a few jobs in Dublin just in case – I didn’t get through though, it was so frustrating, it was so competitive. I was offered a job in the IFSC and I did work experience there, but it was more of an admin role, but I knew I wanted to do chartered accounting. I felt that their attitude was ‘you should be grateful you got a job’.”

In London for interviews, he was given the supports he needed and he flew through the process.

“As with any graduate job application, you answer all the questions about experience. If I’m honest I never mentioned that I was deaf, and luckily I had lots of work experience. In the second round, it would involve a one-to-one interview, and at that point I was asked if I had any adjustments or requirements at that stage, so I could ask for a sign language interpreter. I knew that it would be a good opportunity for me to show what I’m like as a person. Luckily, I made it through the second round. The third round was an assessment day – which involved things like one-to-ones, group tasks… Obviously I did enough to be given the role. It was a three-year contract, including training for charterered accounting. Then I was given a permanent role. I’ve changed roles and companies since then.”

Thomas’ ten-month-old daughter was born deaf, and for this reason, Thomas and his wife have decided to stay in the UK permanently.

“I think if I’m honest, if my daughter was able to hear, I would seriously consider moving back, because I feel that the education system in general for hearing people is better in Ireland. But there’s no access to work scheme in Ireland, the attitude is still 20 years behind. I have friends who are working in Ireland and I’ve seen what they’ve gone through.”

London Calling airs tonight at 10.15pm on RTÉ One