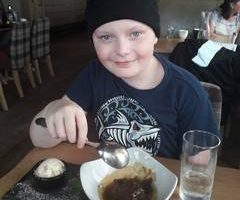 'It's wrong, it's terrible. It does happen' – Taoiseach on delay to chemo treatment for boy (10) due to bed shortages

Taoiseach Leo Varadkar admitted it was “terrible” and “wrong” that a 10-year-old cancer patient had his chemotherapy delayed because of hospital bed shortages.

Mr Varadkar said “it’s not a good idea” to have children with cancer in a hospital when it is “chock full of children with infections”.

He defended his Government’s record on the health services today as he was quizzed on the hospital bed shortages crisis that resulted in delays for chemotherapy for schoolboy Alex O’Shaughnessy at Our Lady’s Hospital in Crumlin.

Speaking to Brendan O’Connor on the Marian Finucane programme on RTE Radio One today, he acknowledged that bed shortages resulted in Alex’s cancer treatment being delayed but the problem was being addressed.

Asked about the bed shortage at the hospital, he said: “We have a plan to fix it and a plan to put it right.  It is not something I have to imagine. I worked in paediatrics, I worked in Crumlin Hospital, I’m a doctor by training and what happens happens.

“And what does happen is the hospital gets very busy this time of year when there are respiratory viruses and the hospital is chock full of children with infections and it is not a good idea to bring in children who have cancer, and who are immune-suppressed, for their treatments. First of all there isn’t space and secondly the hospital is full of infection.” When pressed on the delays in Alex’s treatment, he replied: “It’s wrong. It’s terrible. It does happen. What do we do about it? We build a new hospital.””

“Yet it should have been built a long long time ago. They were talking of building a new children’s hospital when I was a medical student – it is that long ago.

“It’s not that long ago that the previous government spent €35m failing to build it at the Mater. It should have been built then. But now it is being built.

“This is a hospital that has been promised for 20 years. I’m the one who is delivering it.”

Varadkar said cancer survival rates are higher in the Irish health service than in the NHS in the United Kingdom. There has also been a dramatic improvement in survival following strokes in Ireland.

He said suicide rates were down by up to 40pc in recent years but he admitted child and adolescent mental health services were not fit for purpose.

A billion euro a year was now being invested in mental health which is way up on recent years.

Waiting lists for many medical procedures had been halved in the years since he became Taoiseach, he said.

Things are not always getting worse and are, in fact, improving, he said.

He said a survey found that 84pc of people said they had a good experience of the nation’s health service. And there have never been more GPs working in Ireland than at present, he said.