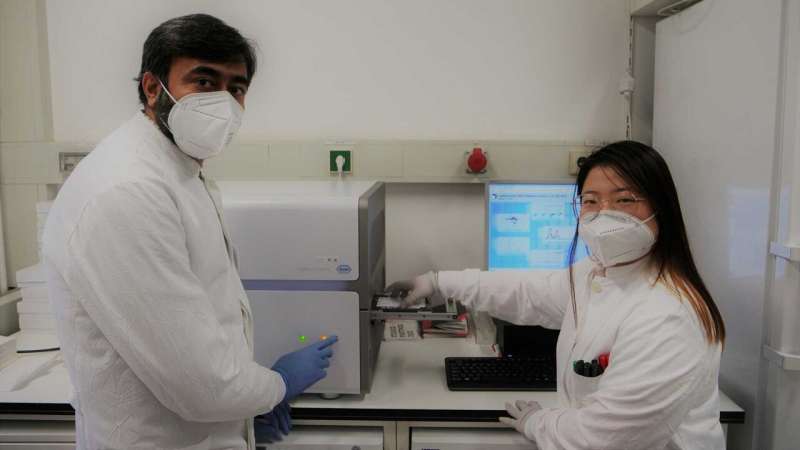 An important task of the human immune system is to maintain the critical balance between efficient defense against a pathogen on the one hand and protection of affected tissues on the other. Disease patterns of viral infections are often characterized by “too much” defense, an excessively strong inflammation that damages the tissue. The resulting damage can be greater than that caused by the pathogen itself. As a rheumatologist, the physician Frank Pessler, head of the research group Biomarkers for Infectious Dieseases at TWINCORE in Hanover, is particularly interested in these facets of infectious diseases known as immunopathology, which play an important role especially in influenza and COVID-19.

During inflammation, some defense cells produce itaconic acid. It has an inhibitory effect on bacteria that survive inside these cells. For several years, researchers have also observed that this highly reactive organic molecule dampens important pro-inflammatory signals in the immune system. In the current study, Frank Pessler and his team at TWINCORE describe the function of itaconic acid during an infection with the influenza virus.

They observed that in lung tissues of mice, as in humans, itaconic acid is produced during an infection with the influenza virus. It offers mice protection against the severe effects of the infection. In contrast, if the enzyme that produces the molecule is missing, the inflammatory reaction in the lungs is more pronounced and the disease is more likely to be fatal. In the tissues studied, the researchers saw that the synthesis of itaconic acid and the enzyme needed for it was accompanied by a lowering of inflammation. When they treated mice with itaconic acid as a “drug” during influenza infection, the inflammation in the lungs almost completely stopped.

To find out which immune cells are the source of the itaconic acid, the researchers use state-of-the-art single-cell sequencing methods. They found that in human blood, monocytes, the cells that can develop into phagocytes, become infected with the flu virus and then produce itaconic acid. Monocytes and other immune cells also reduced the production of pro-inflammatory factors when itaconic acid was added from the outside. “We were able to show for the first time changes in various pro-inflammatory signaling cascades that itaconic acid causes in the defense system during an influenza infection,” says Frank Pessler.

Monocytes become infected, but do not release new virus particles. The researchers made an astonishing observation on somatic cells that productively multiply the influenza virus and resemble lung tissue: “When we infected these cells in the laboratory and treated them with itaconic acid, they produced significantly fewer new virus particles,” says Pessler. Itaconic acid thus seems to be a kind of molecular all-rounder that not only has an antibacterial and anti-inflammatory effect, but can also inhibit the multiplication of influenza viruses.

“In this study, we present results from seven years of scientific investigations to which researchers from Germany, Egypt, China and Pakistan have contributed,” says Pessler. “All our findings point in one clear direction: itaconic acid can throttle the defense reaction and prevent organ damage without thereby promoting virus replication.”

This makes the substance a promising starting point for the development of therapeutic agents. “It could favorably influence the course of the disease, for example, in people who have a deficiency of the body’s own itaconic acid.” Pessler is now thinking one step further: together with researchers from the Helmholtz Institute for Pharmaceutical Research Saarland (HIPS), he wants to use “intelligent drug design” to optimize itaconic acid-like substances that block viral replication even more efficiently.