Iron induces chronic heart failure in half of heart attack survivors, according to new study 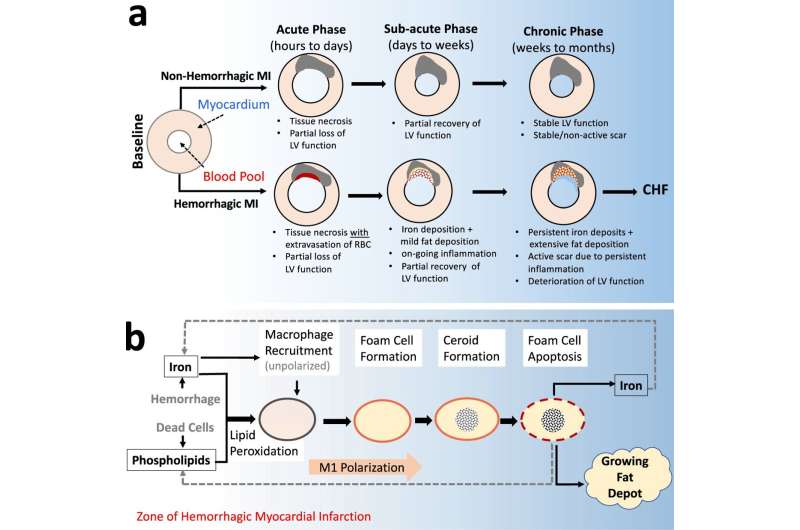 A multi-institution study led by Rohan Dharmakumar, Ph.D., of Indiana University School of Medicine, has identified that iron drives the formation of fatty tissue in the heart and leads to chronic heart failure in about 50% of heart attack survivors. The discovery, recently published in Nature Communications, paves the way for treatments that have the potential to prevent heart failure in nearly half a million people a year in the United States, and many millions more worldwide.

“For the first time, we have identified a root cause of chronic heart failure following a heart attack,” Dharmakumar said.

Dharmakumar is executive director of IU’s Krannert Cardiovascular Research Center and associate director for research at the Cardiovascular Institute, a joint enterprise between IU School of Medicine and IU Health.

“While advances across populations have made survival after a heart attack possible for most, too many survivors suffer long-term complications like heart failure,” said Subha Raman, MD, who is physician director of the Cardiovascular Institute. “Dr. Dharmakumar’s breakthrough science illuminates who is at risk and why and points to an effective way to prevent these complications.”

The study, which involved collaborators from institutions in the United States and Canada, followed large animal models over six months. It found that in heart attacks that result in bleeding within the heart muscle—which is about half of them—scar tissue is slowly replaced by fat. Fatty tissue can’t push blood from the heart effectively, and this is what leads to heart failure and eventually to death in many survivors of hemorrhagic heart attacks, Dharmakumar said.

“Using noninvasive imaging, histology and molecular biology techniques, and various other technologies, we have shown that iron from red blood cells is what drives this process,” he explained. “When we removed the iron, we reduced the amount of fat in the heart muscle. This finding establishes a pathway for clinical investigations to remedy or mitigate the effects associated with iron in hemorrhagic myocardial infarction patients.”

Dharmakumar’s team is currently testing iron chelation therapy to do just that in a just-launched clinical trial.

“Thanks to a clinical trial underway being led by his team at Indiana University, I’m excited to see this treatment improve the lives of millions of heart attack survivors worldwide,” said Raman.