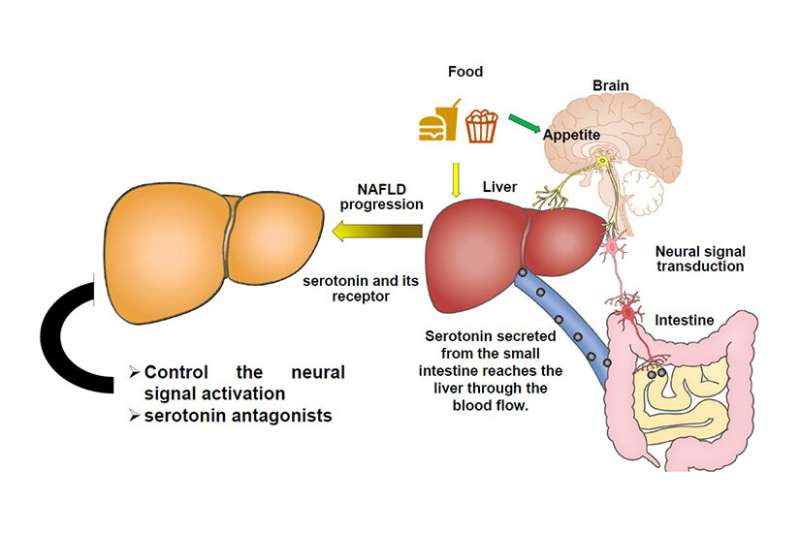 In their Disease Models & Mechanisms study, the research group of Professor Kamimura in Niigata University has demonstrated that the autonomic liver–gut peripheral neural axis is involved in the etiology of NAFLD with key players of 5-HT and HTR2A as effectors.

The prevalence of nonalcoholic fatty liver disease (NAFLD) is increasing, and its diverse and complicated etiology, ranging from obesity and dyslipidemia to abnormal hormone secretion, genetic factors, and gut-liver axis, has rendered defining a standard therapeutic method rather challenging. As previously reported, autonomous nerve signals appear to be involved in the pathogenesis and progression of NAFLD through the inter-organ neural axis, but the mechanism remains unexplained, especially from a therapeutic perspective. In this study, the researchers focused on the involvement of serotonin (5-HT), a multifunctional bioamine with important signaling roles in various physiological pathways, in NAFLD pathology via the autonomic nerve circuit.

The research group analyzed 5-HT expression in the small intestine, its receptors (HTRs) in the liver, and lipid metabolism-related genes, using various NAFLD animal models with/without autonomic neural signal blockade of the liver–gut autonomic neural axis. Hepatic neural blockade retarded the progression of NAFLD by reducing 5-HT in the small intestine, hepatic HTR of Htr2a, and hepatic lipogenic gene expression. Surprisingly, commercially available HTR2A antagonists blocked these therapeutic effects on NAFLD liver pathology. In addition, these effects were milder in melanocortin 4 receptor knockout (MC4R KO), which has poor inhibitory control of appetite in the brain, and cerebral 5-HT and Htr2c expression did not correlate with the peripheral neural blockade.