A day at one mass site in Connecticut shows both the promise and the shortcomings of the approach, which is at the center of President Biden’s plan to bring the pandemic to an end.

Thomas Hatcher Sr., 84, of Glastonbury, Conn., received a shot of the Pfizer-BioNTech Covid vaccine at a mass inoculation site set up at Rentschler Field in East Hartford this month.Credit…

EAST HARTFORD, Conn. — With the nation’s coronavirus vaccine supply expected to swell over the next few months, states and cities are rushing to open mass vaccination sites capable of injecting thousands of shots a day into the arms of Americans, an approach the Biden administration has seized on as crucial for reaching herd immunity in a nation of 330 million.

The Federal Emergency Management Agency has joined in too: It recently helped open seven mega-sites in California, New York and Texas, relying on active-duty troops to staff them and planning many more. Some mass sites, including at Dodger Stadium in Los Angeles and State Farm Stadium in suburban Phoenix, aim to inject at least 12,000 people a day once supply ramps up; the one in Phoenix already operates around the clock.

The sites are one sign of growing momentum toward vaccinating every willing American adult. Johnson & Johnson’s single-dose vaccine won emergency authorization from the Food and Drug Administration on Saturday, and both Moderna and Pfizer have promised much larger weekly shipments of vaccines by early spring. In addition to using mass sites, President Biden wants pharmacies, community clinics that serve the poor and mobile vaccination units to play major roles in increasing the vaccination rate.

With only about 9 percent of adults fully vaccinated to date, the kind of scale mass sites provide may be essential as more and more people become eligible for the vaccines and as more infectious variants of the virus proliferate in the United States.

But while the sites are accelerating vaccination to help meet the current overwhelming demand, there are clear signs they won’t be able to address a different challenge lying ahead: the many Americans who are more difficult to reach and who may be reluctant to get the shots.

The drive-through mass vaccination site on a defunct airstrip here in East Hartford, outside Connecticut’s capital, shows the promise and the drawbacks of the approach.

Run by a nonprofit health clinic, the site has become one of the state’s largest distributors of shots since it opened six weeks ago, and its efficiency has helped Connecticut become a success story. Only Alaska, New Mexico, West Virginia and the Dakotas have administered more doses per 100,000 residents. 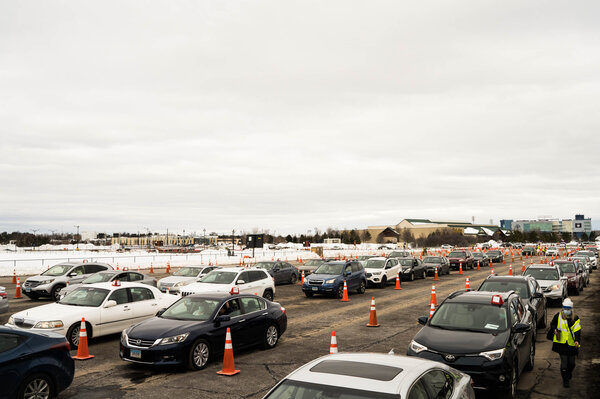 Most of the people running mass sites are learning on the fly. Finding enough vaccinators, already challenging for some sites, could become a broader problem as they multiply. Local health care providers or faith-based groups rooted in communities will likely be far more effective at reaching people who are wary of the shots. And many of the huge sites don’t work for people who lack cars or easy access to public transportation.

“Highly motivated people that have a vehicle — it works great for them,” said Dr. Rodney Hornbake, who serves as both a vaccinator and the East Hartford site’s medic, on call for adverse reactions. “You can’t get here on a city bus.”

Before dawn on a recent raw morning, Susan Bissonnette, the nurse in charge, prepared enough vials of the Pfizer vaccine and diluent for the first few hundred shots of the day. At 7:45 a.m., her team surrounded her in a semicircle, stamping the snow off their boots and warming their fingers for the hours of injections that lay ahead.

“We’re going to start with 40 vials, eight per trailer,” Ms. Bissonnette shouted to the group of 19 nurses, a doctor and an underemployed dentist who had volunteered to help. “OK, so remember it’s Pfizer, right? Point three milliliters, right?”

The site vaccinates about 1,700 people on a good day, partly because Connecticut is small and gets fewer doses than many other states. It is a well-oiled machine, with a few dozen National Guard troops directing cars into 10 lanes, checking in people, who have to make appointments in advance, and making sure they have filled out a medical questionnaire before moving down the runway to their shots.

Troops also supervise the area at the end of the runway where people wait after their shots for 15 minutes — or 30, if they have a history of allergies — in case of serious reactions.

In between are the vaccinators, two per car lane, trading on and off between jabbing arms. When they need to warm up, they retreat inside heated trailers to draw up doses and fill out vaccination cards.

“If you simply open up with 10 lanes, it will be chaos unless you have teams all along the way at checkpoints, executing on the plan you’ve laid out,” said Mark Masselli, the president and chief executive of Community Health Center, which opened the East Hartford site on Jan. 18 and has since opened two smaller versions, in Stamford and Middletown. “You’ve got to marry some groups together — folks with health care delivery sense and folks with logistics sense.”

The site came together in six days, as Mr. Masselli’s staff worked frenetically with the state to install trailers, generators, lights, a wireless network, portable bathrooms, traffic signs and thousands of orange cones to mark the lanes. Every worker has two all-important pieces of equipment: a walkie-talkie to communicate with all the stations and supervisors, and an iPad to verify appointments or enter information about each patient into a database.

The vaccine they use is Pfizer’s, which adds complexity because it has to be stored at minus 70 degrees Fahrenheit. The supply is kept in an ultracold freezer that Community Health Center installed at the adjacent University of Connecticut football stadium. Ms. Bissonnette and other supervisors speed there in bumpy golf carts several times a day to grab more vials, which last for only two hours at room temperature.

The first cars roll in at 8:30, often driven by the adult children or grandchildren of those getting shots.

Drive-through clinics can be better for infection control, some experts say — people roll down their car windows only for the injection — and more comfortable than standing in line. But a month into the Connecticut site’s existence, its weaknesses are also clear.

Traffic can get snarled on the busy road leading to the site, and bad weather can shut it down, requiring hundreds of appointments to be rescheduled on short notice. Spotty vaccine supply, which forced sites in California to close for a few days recently, can also wreak havoc.

More significantly, you need a car, gas money and, for some elderly people, a driver to get to and from the site. At this point, white people comprise 82 percent of those seeking shots at the East Hartford site, down from 90 percent in early February; their overrepresentation is partly because the older population now eligible is less diverse than the state overall.

To address problems of access and equity, FEMA is opening many of its new mass sites in low-income, heavily Black and Latino neighborhoods where fear of the vaccine is higher, vaccination rates have been lower and many people lack cars. In addition to its mass sites, Community Health Center, which serves large numbers of poor and uninsured people in clinics around the state, is also planning to send small mobile teams into neighborhoods to extend its vaccination reach.

The East Hartford site has hired several dozen temporary nurses and trained its dentists and dental hygienists to help with the shots. Still, staffing the site with 22 vaccinators daily remains a challenge, one that will grow nationally as more people become eligible for the shots.

Dr. Marcus Plescia, the chief medical officer for the Association of State and Territorial Health Officials, said the need for mass vaccination sites might wane as more and more of the low-hanging fruit — Americans who are highly motivated to get vaccinated as soon as possible — is picked.

What You Need to Know About the Vaccine Rollout