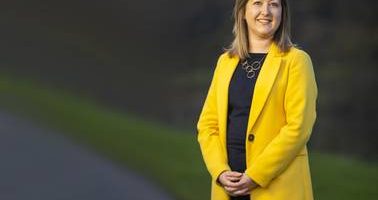 'I was tired, irritable and anxious' – how to recognise a thyroid issue

‘Around 3pc to 5pc of the population will experience an issue with the thyroid, usually meaning that the hormone level has gone high or low,” says Dr Carla Moran, consultant endocrinologist at the Beacon Hospital.

She’s talking about the small butterfly-shaped gland at the front of the neck that secretes several hormones, collectively called thyroid hormones. The main hormone is thyroxine, also called T4, and these hormones act throughout the body, influencing metabolism, growth and development, and body temperature.

“Nodules within the gland is a separate problem and is even more common – that could be up to 50pc of the population, but 90pc of those are benign and most people don’t even know they have them.”

Low hormone levels indicate hypothyroidism. “That is where the gland isn’t making enough hormone and we can pick that up quite easily through a blood test,” says Dr Moran. “GPs would be very familiar with checking for that. The most common cause for hypothyroidism is an auto-immune condition called Hashimoto’s thyroiditis, whereby the body has recognised part of the thyroid gland as a foreign object, and mounts an immune response to it that, in time, destroys the cells that make the thyroid hormone.”

This can be detected by a simple blood test – “we pick up that thyroid hormone levels have gone low, and we can also often pick up a protein called thyroid auto anti-body, a tiny little protein that the body has made against part of the thyroid gland.” The causes, she says, are unknown, “although it’s probably a combination of genetics and an environmental trigger, sometimes related to stress, sometimes after pregnancy, sometimes after a viral infection.”

The symptoms people describe when their hormone levels go low are a constellation, and include fatigue, weight gain, dry skin, hair loss, loss of hair at outer edge of eyebrows, constipation, and feeling cold.

“It’s like your metabolism slows down,” says Dr Moran. “And it’s usually quite insidious. Often, it has been going on for quite a while before people realise they don’t feel right. Hypothyroidism is easily picked up by a GP, and the patient will be put onto replacement thyroxine, taken daily. In most cases where the gland has failed, this is irreversible, so they stay on the replacement for life. But, it is very safe to take, doesn’t have side effects if given in the right doses, is safe in pregnancy and safe for children. And it’s effective – generally, patients feel much better.”

Be warned though, ignoring symptoms is dangerous. Hormone levels will get lower and lower and, in really extreme circumstances, people can go into a coma, although “we hardly ever see that any more,” says Dr Moran.

Then there’s the opposite – hyperthyroidism – where the thyroid makes too much hormone. “This is less common than hypothyroidism, and can come on more suddenly. People will notice over the course of a few weeks to a month that everything speeds up. They lose weight, they feel too warm, they can feel tremulous, they can have palpitations – heart racing – they have poor sleep, they feel on edge and irritable. Sometimes the gland itself gets bigger – visible as a swelling in front part of the neck, a goitre.”

The most common cause of hyperthyroidism is Graves’ disease, named for the Irish doctor who first described it, where the body manufactures an anti-body directed against the thyroid gland that tells it to keep making thyroid hormone.

This too usually affects women, in theirs 20s, 30s and 40s, and can also be detected by a blood test. Here, patients need medication to lower their hormone levels: anti-thyroid drugs. “Usually, they will go on a course for about 18 months. Hormone levels will come down to normal within some weeks, but they need to stay on the drugs for about 18 months to make the condition go away. At that stage, about 50pc will have normal thyroid function into the future. The other 50pc, where the condition comes back – which usually happens within the first year – go back on the drugs but we would think about treatment that is more permanent, because it is likely to keep coming back through their lifetime. More permanent treatments are radioactive iodine, given as a pill, or surgery to remove the gland.”

Dr Moran points out that, although iodine deficiency is the number one cause of an under-active thyroid gland globally, in countries like Ireland, it is very rare. “We get iodine from dairy products, and fish products. Most people meet their requirement through dairy.” She also highlights that, “although I would recommend a healthy lifestyle, in terms of good diet and exercise, I wouldn’t recommend supplements containing iodine, as some have too much. Too little iodine is bad but too much is also bad.”

There is, she says, some controversy around hormone replacement. “Mostly, we use thyroxine which is pure T4, which is then converted in cells to T3, the active form of thyroid hormone. But the gland also makes a small amount of T3.

“The controversy is whether people should be replaced with both T4 and T3. A small number of patients who go onto T4 replacement therapy still report feeling very tired, and some of those have reported feeling better on thyroxine and T3 combined. However, T4 works for the vast majority of people.

“Before considering T3 in such a case, I would first make sure they are taking thyroxin correctly and are on the right dose. Then, look for other causes in case we had missed something, another auto-immune condition. Only then would I consider the addition of T3.”

‘It takes a while for the medication to kick in – weeks’ Everything was going well,” says 36-year-old Gemma O’Halloran. “I was enjoying my new home in Gorey, running my business and celebrating the arrival of my gorgeous new niece. With hindsight, I did feel a bit tired and listless in the weeks before the main symptoms showed themselves, but nothing out of the ordinary. A thyroid problem was the last thing on my mind, even when some hives – a previous health issue – reappeared.”

Gemma continued on “until one day I was in the supermarket and I knelt down to get something from the lowest shelf. I found I couldn’t get back up again. I was stuck and simply didn’t have the strength to rise. I had to sit on the floor and get up one leg at a time.”

Within days, Gemma visited her GP. By then, “my hands were shaking, I was short of breath, my heart felt like it was beating out of my chest, I had no strength in my legs, I had some difficulty swallowing. As I spoke to the GP, I started connecting other dots and knew that something was really wrong.”

The GP immediately suspected a thyroid problem, and scheduled a blood test. “She specifically mentioned hyperthyroidism, an overactive thyroid, and if that was the case, I would need to see an endocrinologist.”

“I immediately began researching,” Gemma says with a laugh. “That’s me, I’m an event manager, I like to get things done. There are times to be patient, and there are times to act.” By the time her blood results came back – now clearly indicating that she needed urgent attention – Gemma had found Dr Moran at the Beacon Hospital, who carried out further blood tests and diagnosed Graves’ disease.

Gemma’s GP had already put her on medication to slow her heart-rate and stop the shaking of her hands – “it took me six attempts to get the tablet pack open that first day, because they trembled so much,” she vividly recalls – and Dr Moran prescribed additional medication to bring her actual hormone levels down.

“It takes a while for the medication to kick in,” Gemma says. “It takes weeks, not days. And in the meantime, I still had all these symptoms. As well as the physical symptoms including tiredness, weakness, hives, weight loss – I lost 9lb even though my appetite was massive – and an enlarged thyroid gland, or goitre that made swallowing difficult, I had emotional and cognitive symptoms too.

“Some of my key strengths are strategic thinking and planning. I found my thinking was a lot slower. I was forgetful. My concentration and focus were impacted too. Emotionally, I experienced anxiety brought on by the hormone imbalances, I felt irritable, and regularly had to take deep breaths to stay calm. I was still working, but I did scale it back for a while. Throughout all this I had amazing support from my family, friends, doctors, colleagues and clients and I thank all of them for it.”

Gemma tried to be as present and pro-active in her own treatment as possible, engaging in the process alongside her doctors. Within three weeks, blood tests showed that her hormone levels were moving in the right direction, and by five weeks she was back in the normal range.

“Once that happened, the treatment changed and focused on maintaining the new levels and ensuring that hypothyroidism didn’t develop.

“I have a blood test every few months, and that will continue for a couple of years, but I feel better now. It shows in every aspect of my life. My strength has returned, my brain is clear, my emotions are back on an even keel. I’m back to myself. The silver lining has been a new perspective, something I think anyone who has been ill and recovers, gains. I’m more aware now of the people in my life, what I mean to them and them to me, and that is something I’m very grateful for.”