I was told by the doctors to put my affairs in order.

They said I’d likely have eight years to live and that I needed to hand over the one thing that allowed me to work as a delivery driver – my license – meaning I was now out of a job.

I’d just been diagnosed with dementia, nearly two years after I first went to the doctor with symptoms.

As I was only 55 years old, I don’t think the doctors thought I was old enough to have the condition.

But here I was, being told by the consultant that I had two rare types of dementia – frontotemporal dementia and corticobasal degeneration. I also had early onset Parkinson’s.

Frontotemporal dementia, which affects the front and sides of the brain, causes problems with behaviour and language. This can cause people to become short tempered or easily agitated.

Corticobasal degeneration is a rare condition that can cause gradually worsening problems with automated functions, like movement, swallowing or breathing.

Symptoms started years before I went to the doctors and I could feel my personality changing slowly. I used to be ‘happy go lucky’, but I’m a lot more serious now and apathetic. I know my dementia is there, as I struggle with short-term memory, but I’m thankfully quite stable.

While my diagnosis turned my world upside down, I was happy to finally have an explanation as to why things were happening that, up until that moment, I couldn’t explain.

I’d been forgetting things, such as dates I was meant to be going somewhere, appointments, phone numbers and addresses. I’d also been struggling to put names to faces, and vice versa. I was becoming unsociable, feeling irritable and short tempered. Now I knew why.

All of these symptoms had begun to show towards the end of 2017.

Pat, my partner of eight years, had worked on the dementia side of care for about 30 years and she started noticing that I was repeating myself. I wouldn’t remember what we’d spoken about the night before, or what our plans were that day. She was the one who encouraged me to see the doctor.

We both knew something wasn’t quite right, but Pat thought it could be down to my thyroid, or a vitamin deficiency – she did mention that it could be early onset dementia, but I didn’t think too much of it, as I thought only older people got dementia.

The road to diagnosis felt long. I was referred to a memory clinic, before having an MRI, which showed that there was damage to my brain.

In 1984 I was involved in a serious motorcycle accident. I had a fractured skull, a blood clot behind my ear, lost my sense of smell permanently and had eight breaks in my lower left arm. 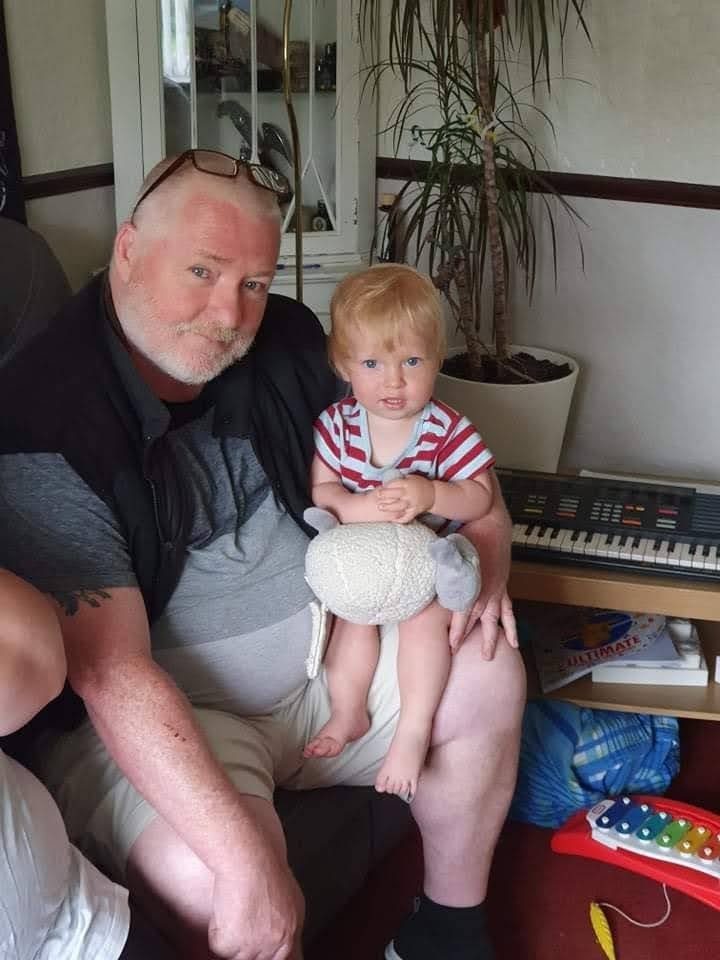 I now know that was the start of my issues, but medical technology wasn’t as extensive back then, so we didn’t know how badly my brain had been impacted.

Fast forward to 2017, when I was diagnosed with corticobasal degeneration, doctors thought that my brain was damaged due to it being knocked around inside the skull because of the bike accident.

I was then referred to a neurologist and booked in for a lumbar puncture, the results of which showed that I had protein markers for dementia.

A PET scan, which stands for positron emission tomography and creates 3D pictures of the inside of your body, showed I had behavioural variable frontotemporal dementia.

This affects behaviour, changes your point of view, and you become disorientated. It impairs your judgement and your moral compass. You can also lose your empathy, and become disjointed and uncaring.

To be honest, I actually felt relieved when I was diagnosed – I finally got an answer to my problems, and it was then that was when I was able to plan my life.

More than 850,000 people in the UK have dementia, including one in 14 people over the age of 65, according to NHS stats – with someone developing dementia in the UK every three minutes. I wasn’t the only one, as it turns out.

Before I was diagnosed, I was working full time delivering for a plumbing company. In my spare time I’d go deep sea fishing and kayaking on the weekends, and go to the occasional motorcycle rally. In general, life was comfortable.

But this changed almost overnight.

Most of my friends disappeared. I think they thought it was contagious, because they didn’t know how to react.

When they’d speak to my partner Pat it was always as if I wasn’t in the room. They’d ask: ‘How is he? How is he doing?’

And I’m sitting there thinking: ‘Hang on a minute, why aren’t they asking me instead?’

I’ve got a few friends and family members that have stayed with me, although the dynamics have shifted in some of my relationships.

Pat is more my carer now than my partner – we have no physical relationship, but we’re still good friends. She helps me a lot with my medication and arranges my appointments.

The impact it had on my life meant I could no longer go out and do things that I loved, either.

Getting to places has become difficult for me as my body doesn’t work the way it used to so I’m not able to take myself fishing like I used to.

It was even worse during lockdown as I’d go for weeks without leaving the house, but since getting a mobility scooter, I’ve reclaimed my independence. With the scooter, I can now go out to the shops or to the local lake to sit and read a book in the fresh air.

But I grew to realise that there is life after diagnosis, and I work closely with the Alzheimer’s Society to raise awareness that younger people can have dementia, too.

The diagnosis gave me an answer to my memory problems, so I was able to put structures in place and change my lifestyle to accommodate my needs.

Post-it notes are my best friends now. I use them to help me remember times and dates of places I need to be. My phone has lots of things in the diary, like birthdays or anniversaries, and I use Alexa a lot. She wakes me up every morning and helps me organise my life – if I’m expecting a call or have an appointment, Alexa will remind me.

There is also financial help that I was able to claim through council tax reductions, which I think many people are not aware of and because I ended up getting an official diagnosis, I was able to claim Personal Independence Payment (PIP) and have a disability rail card and bus pass.

A lot of people get very depressed and in a dark place after their diagnosis, so I try to show them that there is life afterwards.

I don’t take life as seriously anymore, and I am living it to the full. I’ve been having more fun this year than I have in quite some time, meeting people on Zoom calls through the Alzheimer’s Society.

I also like to have day trips to London and into Epping Forrest. My brother sometimes takes me out for a caravan break at the weekends, and I’ve also started to get back into fishing with a friend, which I really enjoy. I’ve learnt to let go and embrace the little things in life.

Life certainly changes, but with the right support and routines in place, those with dementia – including young people – can lead a fulfilling life. I hope I am proof of that.

This Dementia Action Week (16-22 May), Alzheimer’s Society is helping people take their first step towards a dementia diagnosis. If you’re worried about your memory, or that of a loved one, visit www.alzheimers.org.uk/memoryloss

In this exciting new series from Metro.co.uk, What It Feels Like… not only shares one person’s moving story, but also the details and emotions entwined within it, to allow readers a true insight into their life changing experience.