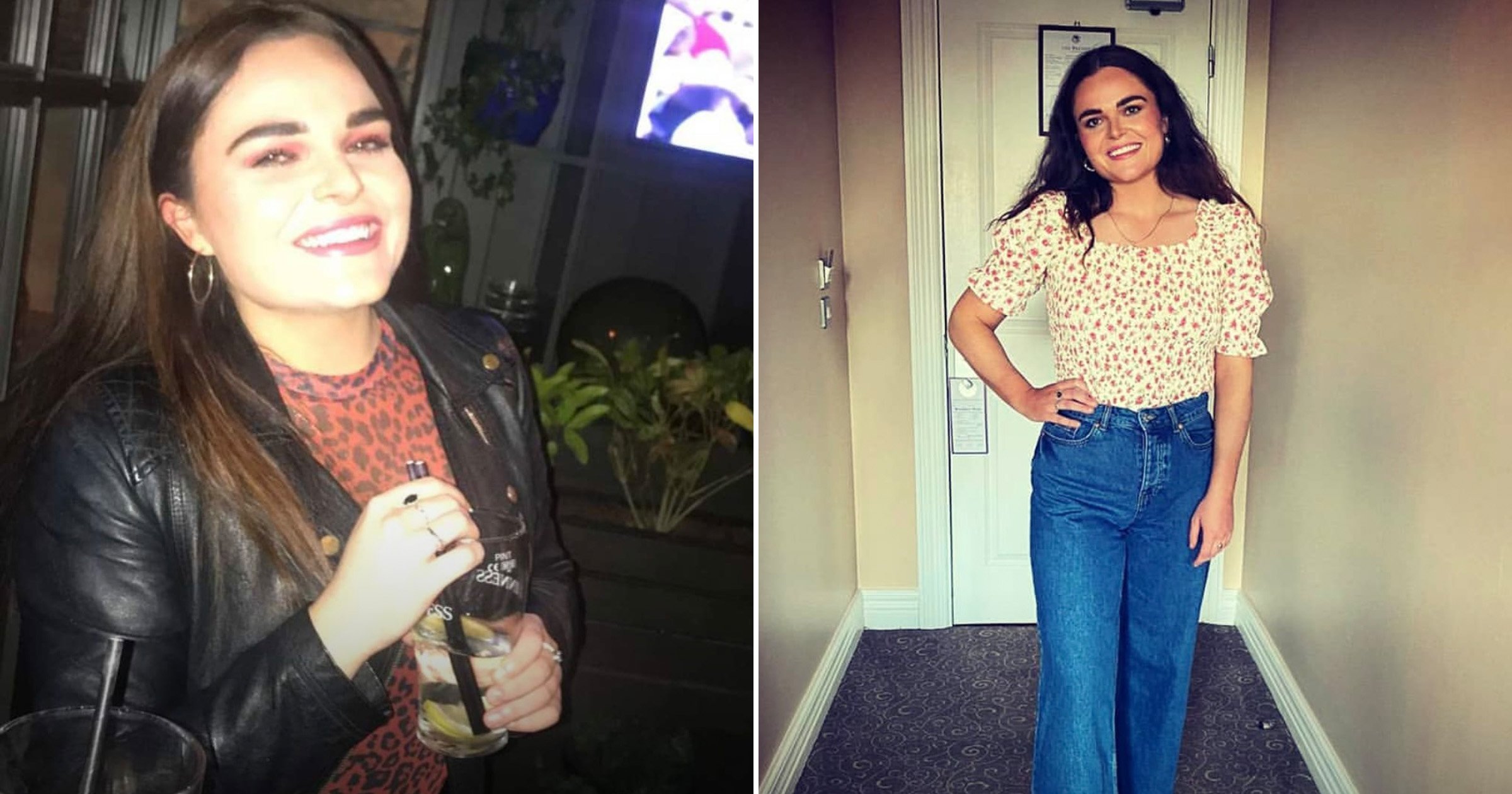 ‘I wanted carnage. I didn’t want peace. I wanted a mad, mental, off the wall life,’ says 28-year-old Carol Keniry.

From County Cork in the southwest of Ireland, like many young people, Carol indulged in alcohol, partying and all that entailed from the time she was a teenager.

To do so in Ireland is the norm. The drinking culture on the island is similar to that in the UK. Alcohol is the centre of many social interactions and it is acceptable as such. From weekends to weddings to wakes, it’s always there and flowing.

So for Carol, drinking was a part of growing up.

‘It started when I was quite young,’ she tells Metro.co.uk. ‘We started meeting up and having drinks around the age of 15 and 16. I actually had the nickname ‘one can Carol’ because I wasn’t good at drinking.

‘I would get drunk very quickly and get very upset. My grandmother died around that time and I was very close to her. I think that had an effect on me but again at that age you don’t really understand.’

A few years later, Carol says she ‘hit the ground running’ when it came to alcohol. Being of age meant she had more direct access to bars and alcohol. It was from there that real problems started to arise.

‘The first proper party I ever went to was a friend’s 21st,’ she recalls. ‘I drank two bottles of wine before we got to the pub. I couldn’t remember a thing. I found out I was carried home by my parents.

‘The next morning I came down to my mother cleaning the house and she got so upset with me because she had never seen me like that before.

In the following decade, Carol says her life experience became a cycle. When one weekend was over, she was yearning for the next.

‘Sometimes there were good nights, but most of the time I’d wake up and realise I would have got sick the night before,’ she explains. ‘I’d be rattled for days.

‘In later years, I wouldn’t feel right until the Thursday of that week but then it would all start again on Friday. It just kept on going.

‘My life was alcohol. My life was going out. There was nothing else.’

There is a certain stigma and image that comes with being deemed an ‘alcoholic’. As Carol was just a girl in her twenties living it up and having the ‘craic,’ she found her issue harder to identify and so did others.

‘My life was alcohol. My life was going out. There was nothing else.’

‘People knew me as the person you could always ring up and who would say yes to drinks,’ she explains. ‘I was that person you called for fun.

‘Binge drinking is almost normal in Ireland so nobody thought any differently because everyone was doing it. I had to live up to this image.’

Two people that did realise there was a problem were Carol’s parents.

‘There were times when I would have fell and destroyed my face and came in home so drunk and the next day my parents would be begging me to stop,’ she says.

‘They would sit there pleading with me, their faces full of worry, and I would just cry and cry because I knew I couldn’t stop.

‘I couldn’t see a life without drinking. How am I going to laugh or unwind? How would I do anything without it?’

Her parents were also the first to put a name to Carol’s issue.

‘After a particularly bad bender at 25, I came home and they called me an alcoholic,’ she admits.

‘I knew they had been fighting against that word because they felt a type of shame but they were at their wit’s end and just wanted me to get help.

‘Things had got so bad my dad told me it was time to leave the house. That was devastating. I didn’t have anywhere to go.’

Carol tried counsellors and attempted an AA meeting, but this didn’t stop her drinking.

‘I was shocked when I sat down,’ she explained. ‘I had an image of a circle with all men in it of a certain age who spend their days drinking but it wasn’t. When they told their stories, it felt like they had all lived my life and were reciting it back to me. I was sobbing. It was so overwhelming.’

‘I tried to do it for my parents but in my heart, I knew I was going to start drinking again.’

Carol didn’t return to AA until she experienced what she described as her ‘rock bottom’ in May 2021.

‘I went drinking with a friend and by that stage I was living in my own place but I ended back at my parent’s house,’ she says.

‘I woke up and the floor was wet. Someone had obviously cleaned up after me. I was lying in my bed and my dad came into the room. He just looked at me. By that stage I had started to feel like people were giving up on me but I had never seen that look on my dad. And it was the saddest thing I’d ever seen. He was giving up.

‘I left and went back to my place and went into bed. I remember it was the most beautiful sunny day. People were walking outside and I was just lying there with the curtains drawn, awake, shaking and shivering.

‘I remember thinking in my head “I want out”. I didn’t want to be there. I wanted to be gone. I know I wouldn’t have done it but I was so scared.’

Later that day Carol searched for AA meetings and got into her car.

‘I went in and I sat down and just cried,’ she recalls. ‘I listened and ran out but I saw a woman waiting for me. She came over and asked me if I was ok. She told me she had just started herself and all I had to do was take one day at a time. She said “just get through today, that’s it.” I thank god she was there. Now she is one of my best friends.’

Last month, Carol celebrated one year of sobriety. In the space of 12 months, her life has changed completely. She says her journey to get here wasn’t easy.

‘I threw myself into the work,’ she tells us. ‘I was so sick and unwell but I went to every meeting I could. I listened. I talked. I met new people.

‘The first six months were the hardest. Sometimes, it felt like hell.

‘It was exhausting but I always kept reminding myself each night that I got through another day and didn’t have a drink. That’s all I have to do.’

She says life is better now than anything she could have dreamed of.

‘It’s amazing,’ she beams. ‘I can definitely have my moments but for the most part life is so much better. I have peace now. I have peace with my family and friends. My life is manageable and I never knew what that felt like.

‘I have other interests now. I’ve joined Crossfit and found an amazing community there, I still go to my meetings and I still socialise just not in the same way.

‘I think people are always looking for this magic in life and for it always to be buzzing and unbelievable, but I’ve realised that for people with addictions, life is much better when it’s level. Crap feelings come and go and happy ones are the same. Everything passes and that’s ok. This journey has changed my mindset on that.’

When starting on the road to sobriety, Carol promised herself that she would share her story when she reached her one year anniversary. She wanted to do this not only for herself but for other people, young and old, who need a story to believe in.

‘I worried first about the outside reaction when I told people,’ she says. ‘But the response has been incredible. So many people have said they wish they could do the same. It’s very tough, especially if you are young, to break the cycle.

‘I want people to know there’s a way out of it and life can be so much better.’

She wants those struggling to know that if you feel in your heart you have a problem, one day something will click.

From that point on, it gets better.

‘People may not believe that because I didn’t at the start, but it’s true,’ she explains. ‘I’m proof of it.

‘You may think you deserve the life you have, but that is false. You deserve so much more. Don’t give up on yourself.

‘There are so many services available. Lots of towns have drug and alcohol reps who will help you. AA helped me but you can also reach out to counsellors. Follow through with what you are comfortable with.’

Most importantly, she urges others to envelop themselves in goodness.

‘When you stop drinking, a lot of ‘friends’ will disappear but the good ones will stay,’ she says.

‘Keep them close and never let go. Surround yourself with good people and good things. I promise, it gets better.

‘And most importantly, do it for yourself.’