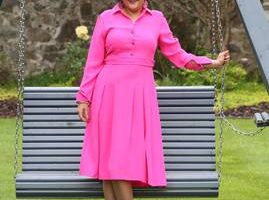 'I asked him "am I going to die?"' – school teacher Eimear on her breast cancer diagnosis

In January 2018, Eimear Cregg (37) was preparing to return to her job as a primary school teacher after the Christmas break.

“I remember the night before, I had that ‘Sunday night fear’ around all the things I needed to do. Things that seemed hugely important at the time,” says Eimear. Most of those things were about to be put into a very different perspective.

“I set my alarm for 6am. I remember when the alarm went off, I hit snooze and thought ‘just two more minutes.’ I rolled over, and that’s when I felt the lump. It was small, about the size of a pea, in behind the nipple. It wasn’t sore, and it felt quite mobile, but I had seen enough about breast cancer awareness that I knew I couldn’t ignore it.”

Eimear went into work and, “around 9.30am, when I had the children settled, I rang my GP.” She was given an appointment for that afternoon. The appointment was encouraging – “because of where I was in my menstrual cycle, and because the lump was mobile and wasn’t wedged, my GP didn’t feel that it was of concern. However, she certainly wanted to see me again, once I had had my period, to check up. I left feeling quite confident.”

Two weeks later, at the follow-up visit, the lump was still there, and at that point Eimear’s GP referred her to St James’ hospital for a triple assessment (meaning clinical examination, a mammogram and/or ultrasound, and a core biopsy or fine needle aspiration). “I could tell by her demeanour that she was surprised to find the lump still there,” Eimear says.

READ MORE: ‘I drove around collecting milk, while she pumped in the chemo ward’ – Stephen Teap on importance of breast milk donation

The doctor who did the clinical examination immediately said she wasn’t happy with the presentation of the lump. Eimear went for a mammogram. As she was waiting for the ultrasound, the mammographer called her back in for a second “deeper” image. “There were three people in the room when I went back in,” Eimear says. “I knew then, although no one said anything.”

She was given an ultrasound and a biopsy “under my arm. I knew that was for my lymph nodes. He was an older doctor, and I asked him ‘am I going to die?’ He said ‘we’ll look after you very well.’ I suppose that was all the assurance he could give at that stage.”

Still no one had said ‘cancer,’ “but I was interpreting everything they did say.”

Eimear’s mother had accompanied her to the appointment, and all this time had been sitting in the waiting room. When Eimear went out to her and told her what had happened “it felt like it was happening to someone else,” she says. “I couldn’t feel the ground under my feet. My mam was talking to the doctor, about me, and I was thinking ‘that poor person,’ as if it wasn’t me at all.”

READ MORE: “I wasn’t allowed to be with my child for 24 hours’ – Young mum’s world turned upside down with cancer diagnosis

Eimear waited a week for her biopsy results, and then was booked in for more scans.

“I was to have a bone scan and a CT scan. That was the week of the big snow in 2018, and the hospital staff were cancelling all appointments, in line with the recommendations. I begged them not to cancel me because I couldn’t bear to wait any longer. They were amazing and scheduled me earlier so I got in before the snow.”

In March 2018, Eimear started 20 weeks of chemotherapy. “Every two weeks for eight weeks, then weekly for another 12 weeks. That was so surreal. I remember going into the chemo ward on the first day and looking around and thinking ‘I shouldn’t be here. I don’t fit.’ A week or two later, when I had lost my hair and was exhausted, in a tracksuit, I realised ‘Now I fit…’ Having cancer shakes your whole identity, your sense of who you are.”

The cumulative effect of the chemotherapy was, of course, very tough. “I lost my hair, my eyelashes, eyebrows, even my nose hairs, which meant I had a constantly runny nose. That was awful. For the first few days after each treatment, I felt as though I had been hit by a bus. Completely floored. I was so conscious of not getting an infection that I isolated myself, and that was very hard. Most of my friends have young children, so I had to steer clear of them, but it was lonely.”

Eimear had moved home to her parents, with her Yorkshire terrier, Bobby, to be minded, “they were wonderful, but you lose your independence. And I felt bad for them – they liked their empty nest!”

READ MORE: ‘The doctor said, while breast cancer in men was unusual, it wasn’t unheard of’ – Seamus Bennett on his shock diagnosis

After finishing her chemotherapy, Eimear had a couple of weeks’ break, then surgery. She had a mastectomy and lymph clearance.

“I didn’t have a breast reconstruction,” she says. “I just wanted the tumour gone, and I didn’t want to spend any extra time in hospital. There are some tops I can’t wear now, but I don’t care.”

Following the surgery, she had radiotherapy, taking her through to November.

“I found that very hard,” she says. “It was unpleasant, and by then, I had spent the whole of 2018 removed from my life and my friends. I knew everyone else was getting on with their lives, and I felt so devastated. I had been put onto hormonal tablets by then, to put me into menopause, and that had an effect on my mood also. It was a depressing time.”

Within six weeks of finishing radiotherapy, Eimear was told she could go back to work. “I was told the surgery had had a good outcome, they got everything. My mammogram came back clear. Now, I’m in the system and I just keep showing up for my check-ups. I’m back at work, and I’m doing OK. I worry a lot,” she says, with commendable honesty.

“I worry about every little ache and pain. I worry about side effects. Every cancer I hear mentioned, I worry that I have it. I was a bit of a worrier before all this, and I have had a lot of cancer in my family – I knew this could happen to anyone, at any time – but maybe that has stood to me? I had seen cancer, I knew it could happen, and that sent me straight to my GP.”

READ MORE: “Going through cancer you have clarity – it is the only thing you focus on”

Eimear is back in her own home now, back at work, “I’m getting on with things. I know it will get easier over time. I’m still often tired, but it’s getting better. And it’s good to be busy. I’m alive, and I’m going to keep going.”

She is also doing what she can for other women, supporting a new initiative from Breast Cancer Ireland (BCI), which aims to educate primary teachers on the importance of good breast health.

⬤ The Breast Health Education and Awareness programme, which Breast Cancer Ireland (BCI) launched in 2017, is being extended with the aim, over the next five years, of visiting every primary school in the country. With the backing of the INTO and the support of insurance brokers, Cornmarket, it will see BCI’s outreach coordinators and nurses educating teachers on how to perform a self-breast examination and highlighting the signs and symptoms to recognise.

⬤ This complimentary service now has six coordinators covering Leinster, Munster and Connaught and the border counties. Through the use of a special medically-induced mannequin showing the eight symptoms of breast cancer, the team from Breast Cancer Ireland visit at teachers’ break time with a short presentation on how to recognise the symptoms and on how to perform a self-breast examination and to download Breast Cancer Ireland’s free Breast Aware App.

⬤ What To Look For

There are eight signs/symptoms that should be of concern: puckering of the skin of the breast; lump in breast or armpit; change in skin around nipple or nipple discharge; dimpling of the nipple or nipple retraction; unusual increase in the size of one breast; one breast unusually lower than the other (nipples at different levels); enlargement of the glands; unusual swelling in the armpit.

Related posts:
Health News 'I asked him "am I g
Health Problems