In March 2020, Dr. Niall Elliott was planning for the Summer Olympics with his colleagues at the British Olympic Association. Plans were drawn for what to do if an athlete suffered a catastrophic injury or a mental health crisis in the final lead up to the Games. There were meetings on how to move some of the world’s finest athletes across the globe and how to address logistical snafus.

They had plans in place for nearly everything, except a global pandemic, he said. 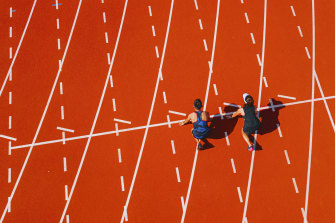 Experts say it takes on average twice as long to get back to where you were following a COVID-19 infection.Credit:iStock

Overnight, Elliott began providing support and care for athletes who were locked out of training facilities and fearful of how this new virus could affect their athletic careers. The questions were endless and the answers scarce.

“We were very cautious at the start because it was a new virus,” Elliott said. “We just didn’t know what the impact would be on the body.”

The urgent question for athletes: How long would COVID-19 knock you out and when could you get back to training?

Olympians and weekend warriors have been asking that question ever since. And the answer continues to shift as doctors learn more about the coronavirus and as its variants wreak havoc on training schedules.

The key is resetting expectations and rethinking a timeline for a full return to play or a return to running.

“Compared to most viral illnesses, the expectation that athletes should have is that it takes on average twice as long to get back to where you were,” said Dr. Tod Olin, the director of the Exercise and Performance Breathing Center at National Jewish Health in Denver. “So if someone usually returns to their activity within a week of having a seasonal flu, it may take two weeks to come back after having COVID-19. But it’s also taken some three to four weeks for a lot of people, and a fraction of people take considerably longer.”

That’s a hard pill to swallow for athletes looking to return to their previous selves as soon as symptoms subside. And it’s not easy to tell runners to slow down when many of their goals are to speed up.

In June 2020, Elliott published a protocol that has evolved and been adopted by other physicians as more data has become available on the virus and how it affects athletes. The initial protocol pointed to a six-stage gradual return to play, starting with a minimum rest period of 10 days and working up to increased frequency, duration and intensity of training sessions.

“You will always have another competition, another race, another training session.”

That distinction – along with patients who test positive but remain asymptomatic – helped Elliott adjust his guidance to a five-stage protocol, one that better serves athletes looking to return to training. Patients now can skip ahead to different stages of the protocol depending on their symptoms and their severity.

And in the year of post-vaccine data, doctors have found that pushing the pace or intensity in training sessions can dramatically backfire.

“They are used to solving all problems by trying harder,” Olin, who has worked extensively with Olympic athletes, said. “And COVID-19 is seemingly unique if you push too hard – if you train through this – there’s this phenomenon of the setback, one that’s analogous to a hamstring injury, where if you were getting a little bit better and then you try to drop the hammer for a workout and you are three months back.”

It’s a sentiment doctors and experts are sharing even more widely post-vaccines, warning of regression if athletes return to high intensity training or racing before their body is ready.

“You will always have another competition, another race, another training session,” Elliott echoed.

“But you only have one body,” he added. “You’ve got to look after it.”

This article originally appeared in The New York Times.

Make the most of your health, relationships, fitness and nutrition with our Live Well newsletter. Get it in your inbox every Monday.

Most Viewed in Lifestyle