Scientists have discovered a way to track changes in sound processing in the brains of people with HIV. Their test provides a simple technique for studying how HIV affects the central nervous system. 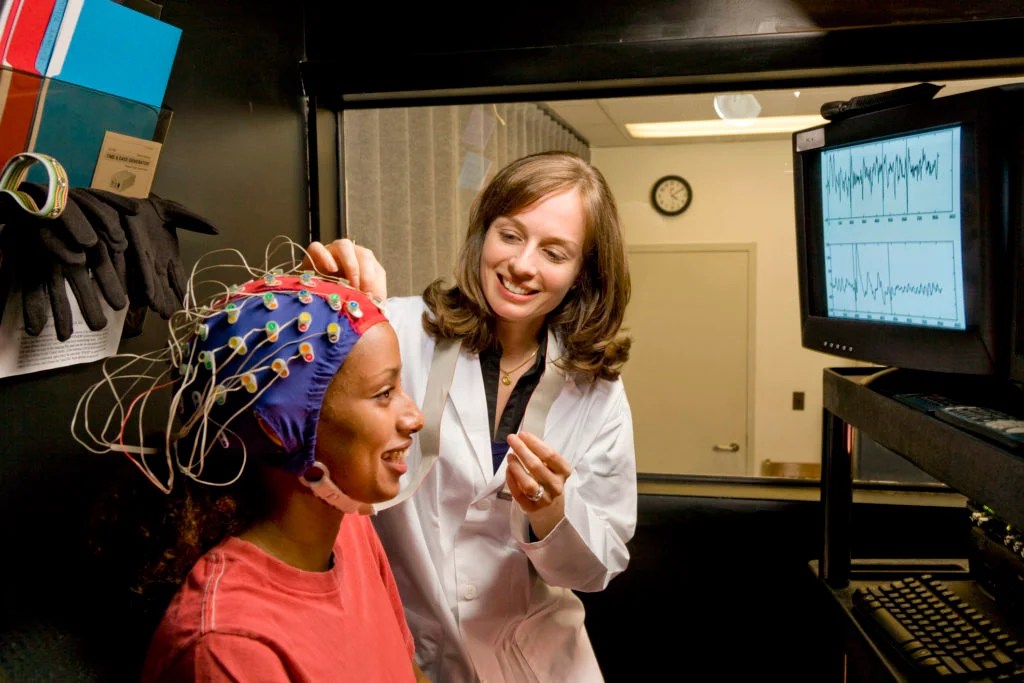 Due to advances in antiretroviral drug treatment over the past 20 years, most people with HIV can now expect to live long, healthy lives.

However, even if treatment successfully brings the virus under control, people can experience cognitive issues as a result of HIV causing damage to their central nervous system.

Up to 45% of people with HIV may develop these difficulties, which are known collectively as HIV-associated neurocognitive disorder (HAND).

Although the cause of HAND remains unknown, scientists have several theories. They speculate, for example, that it may be the result of chronic inflammation, lingering damage from the initial infection, or a toxic effect of antiretroviral drugs.

Alternatively, low levels of the virus may persist in the brain as a result of the blood-brain barrier limiting the passage of antiretroviral drugs into the brain.

The signs and symptoms of HAND can be subtle, which makes it challenging for doctors to diagnose early and monitor.

One of the problems that people with HIV sometimes report is difficulty understanding speech in the presence of background noise.

Researchers at the Geisel School of Medicine at Dartmouth in Hanover, NH, led a team that studied the hearing of a group of people with HIV in Dar es Salaam in Tanzania.

“Initially, we thought we’d find that HIV affects the ear, but what seems to be affected is the brain’s ability to process sound,” says study co-leader Dr. Jay Buckey Jr., a professor of medicine at Geisel.

To test this idea, they used scalp electrodes to monitor the brain waves of 68 people with HIV and 59 people without as they listened to sounds.

Specifically, they recorded a brain response known as the speech-evoked frequency-following response (FFR).

Certain features of brain waves, such as their timing and amplitude, reveal how faithfully the brain encodes an auditory stimulus. The FFR has proven particularly useful for investigating how the brain processes information in highly complex sounds, such as music and speech.

“There are many acoustic ingredients in speech, such as pitch, timing, harmonics, and phrase,” says study co-leader Nina Kraus, Ph.D., a professor of communication sciences and neurobiology at Northwestern.

“The FFR enables us to play speech sounds into the ear of study participants and figure out how good a job the brain is doing processing these different acoustic ingredients.”

The researchers recorded the FFR while the study participants listened to common speech sounds, such as “ba,” “da,” and “ga.”

They looked at how well the signal encoded two acoustic features of speech, known as the harmonics corresponding to the first formant and fundamental frequency.

The harmonics corresponding to the first formant identify the units of sound, or “phonemes,” that differentiate one word from another, whereas the fundamental frequency reflects the frequency at which the vocal cords vibrate, which helps identify the speaker.

They also performed well on standard tests of hearing, but the FFR revealed that the brains of people with HIV were worse at encoding the first formant.

In other words, they had normal hearing thresholds, but their brains could not distinguish between the sounds of different words as accurately.

“When the brain processes sound, it’s not like a volume knob where all of the acoustic ingredients are either processed well or poorly,” Kraus explains. “With the FFR, we’re able to see which aspects of auditory processing are affected or diminished and ask, ‘[I]s there a specific neural signature that aligns itself with HIV?'”

The researchers have published their study in the journal Clinical Neurophysiology.

The researchers note that as people get older, even if their hearing remains normal, their brains get worse at processing the same speech features that the brains of people with HIV seem to struggle with.

They write that HIV-associated cognitive problems may therefore be akin to early aging.

In the future, they hope that other scientists will use the FFR not only to study brain dysfunction associated with HIV, but also other conditions, such as concussion and Alzheimer’s disease.

Standard tests of cognitive function involve giving people tasks, such as solving math problems or remembering a list of words. However, these are dependent on the language people speak and their culture.

“What’s significant about our results is that the test doesn’t require any actions on the [subject’s] part. It’s recorded passively — subjects can even sleep or watch a movie,” says Dr. Buckey. “We think the FFR holds a lot of promise as a way to assess the brain easily and objectively.”

In their paper, the researchers note that the test could prove particularly useful in parts of the world with the most HIV infections and limited healthcare resources.

They write, “While previous neuroimaging and electrophysiological studies have shown differences between HIV+ and HIV- individuals, these approaches are difficult to transport to resource-limited settings such as sub-Saharan Africa, where >70% of the world’s HIV+ population lives and where there is some evidence that neurocognitive symptoms are more severe.”

The study authors acknowledge that research projects involving more participants will be necessary to confirm their results. They say that it would also be interesting to track changes in the FFR from the early stages of infection onward.

Finally, in light of evidence suggesting that different strains of the virus may have differing neurological effects, they would like to see studies that compare FFR tests in different populations around the world.