The routine things in Chris Long’s life used to include biking 30 miles three times a week and taking courses toward a Ph.D. in eight-week sessions.

But since getting sick with the coronavirus in March, Mr. Long, 54, has fallen into a distressing new cycle — one that so far has landed him in the hospital seven times.

Periodically since his initial five-day hospitalization, his lungs begin filling again; he starts coughing uncontrollably and runs a low fever. Roughly 18 days later, he spews up greenish-yellow fluid, signaling yet another bout of pneumonia.

Soon, his oxygen levels drop and his heart rate accelerates to compensate, sending him to a hospital near his home in Clarkston, Mich., for several days, sometimes in intensive care.

“This will never go away,” he said, describing his worst fear. “This will be my going-forward for the foreseeable future.”

Nearly a year into the pandemic, it’s clear that recovering from Covid-19’s initial onslaught can be an arduous, uneven journey. Now, studies reveal that a significant subset of patients are having to return to hospitals, sometimes repeatedly, with complications triggered by the disease or by the body’s efforts to defeat the virus.

Even as vaccines give hope for stopping the spread of the virus, the surge of new cases portends repeated hospitalizations for more patients, taxing medical resources and turning some people’s path to recovery into a Sisyphean odyssey that upends their lives.

Data on rehospitalizations of coronavirus patients are incomplete, but early studies suggest that in the United States alone, tens of thousands or even hundreds of thousands could ultimately return to the hospital.

A study by the Centers for Disease Control and Prevention of 106,543 coronavirus patients initially hospitalized between March and July found that one in 11 was readmitted within two months of being discharged, with 1.6 percent of patients readmitted more than once.

In another study of 1,775 coronavirus patients discharged from 132 V.A. hospitals in the pandemic’s early months, nearly a fifth were rehospitalized within 60 days. More than 22 percent of them needed intensive care, and 7 percent required ventilators.

And in a report on 1,250 patients discharged from 38 Michigan hospitals from mid-March to July, 15 percent were rehospitalized within 60 days.

“Even if they had a very mild course, at least one-third have significant symptomology two to three months out,” said Dr. Eleftherios Mylonakis, chief of infectious diseases at Brown University’s Warren Alpert Medical School and Lifespan hospitals, who co-wrote another report. “There is a wave of readmissions that is building, because at some point these people will say ‘I’m not well.’”

Many who are rehospitalized were vulnerable to serious symptoms because they were over 65 or had chronic conditions. But some younger and previously healthy people have returned to hospitals, too.

When Becca Meyer, 31, of Paw Paw, Mich., contracted the coronavirus in early March, she initially stayed home, nursing symptoms such as difficulty breathing, chest pain, fever, extreme fatigue and hallucinations that included visions of being attacked by a sponge in the shower.

Ms. Meyer, a mother of four, eventually was hospitalized for a week in March and again in April. She was readmitted for an infection in August and for severe nausea in September, according to medical records, which labeled her condition “long haul Covid-19.”

Because she couldn’t hold down food, doctors discharged her with a nasal feeding tube connected to protein-and-electrolyte formula on a pole, which, she said, “I’m supposed to be attached to 20 hours a day.”

Feeding tube issues required hospitalization for nearly three weeks in October and a week in December. She has been unable to resume her job in customer service, spent the summer using a walker, and has had a home health nurse for weeks.

“It’s been a roller coaster since March and I’m now in the downswing of it, where I’m back to being in bed all the time and not being able to eat much, coughing a lot more, having more chest pain,” she said.

Readmissions strain hospital resources, and returning patients may be exposed to new infections or develop muscle atrophy from being bedridden. Mr. Long and Ms. Meyer said they contracted the bacterial infection C. difficile during rehospitalizations.

“Readmissions have been associated, even before Covid, with worse patient outcomes,” Dr. Mylonakis said.

Some research suggests implications for hospitals currently overwhelmed with cases. A Mount Sinai Hospital study of New York’s first wave found that patients with shorter initial stays and those not sick enough for intensive care were more likely to return within two weeks.

Dr. Lala, who co-wrote the study, said the thinking at overstretched hospitals was “we have a lack of resources, so if the patients are stable get them home.” But, she added, “the fact that length of stay was indeed shorter for those patients who return is begging the question of: Were we kicking these people out the door too soon?”

Many rehospitalized patients have respiratory problems, but some have blood clots, heart trouble, sepsis, gastrointestinal symptoms or other issues, doctors report. Some have neurological symptoms like brain fog, “a clear cognitive issue that is evident when they get readmitted,” said Dr. Vineet Chopra, chief of hospital medicine at the University of Michigan, who co-wrote the Michigan study. “It is there, and it is real.”

“Sometimes there’s a lot of push to get patients out of the hospital, and they want to get out of the hospital and sometimes they’re not ready,” so they return, she said. But some appropriately discharged patients develop additional problems or return to hospitals because they lack affordable outpatient care. 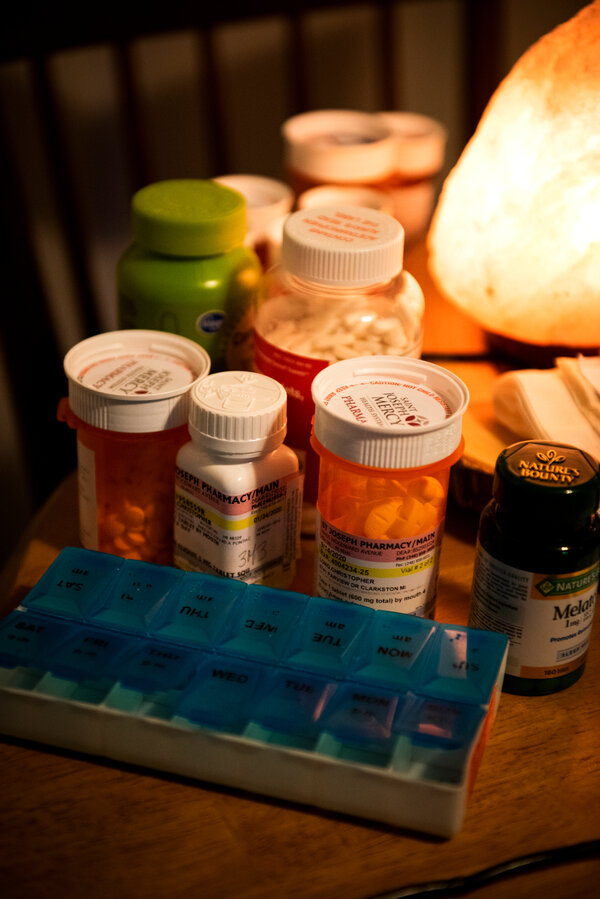 Mr. Long’s ordeal began on March 9. “I couldn’t stand up without falling over,” he said.

His primary physician, Dr. Benjamin Diaczok, immediately told him to call an ambulance.

“I crawled out to the front door,” recalled Mr. Long. He was barefoot and remembers sticking out his arm to prop open the door for the ambulance crew, who found him facedown.

He awoke three days later, in the hospital, when he accidentally pulled out the tubes to the ventilator he’d been hooked up to. After two more days, he’d stabilized enough to return to the apartment where he lives alone, an hour north of Detroit.

Mr. Long had some previous health issues, including blood clots in his lungs and legs several years ago and an irregular heartbeat requiring an implanted heart monitor in 2018. Still, before Covid-19, he was “very high-functioning, very energetic,” Dr. Diaczok said.

He was rehospitalized in April, May, June, July, August and September, requiring oxygen and intravenous antibiotics, potassium and magnesium.

“Something must have happened to his lungs that is making them more prone for this,” Dr. Diaczok said.

Mr. Long, a former consultant on tank systems for the military, is also experiencing brain fog that’s forced a hiatus from classes toward a Ph.D. in business convergence strategy.

“I read 10 pages in one of my textbooks and then five minutes later, after a phone call, I can’t remember what I read,” he said.

“It’s horrible, ”Dr. Diaczok said. “This is a man that thinks for a living, and he can’t do his job.”

And his heart arrhythmia, controlled since 2018, has resurfaced. Unless Mr. Long, who is 6-foot-7, sleeps at an incline on his couch, his heart skips beats, causing his monitor to prompt middle-of-the-night calls from his doctor’s office. Unable to lie in bed, “I don’t sleep through the night.”

Small exertions — “just to stand up to go do the dishes” — are exhausting. In July, he tried starting physical therapy but was told he wasn’t ready.

In August, he got up too fast, fell and “I was very confused,” he recalled. During that hospital readmission, doctors noted “altered mental status” from dehydration and treated him for pneumonia and functional lung collapse.

In December, when a pulmonologist administered a breathing test, “I couldn’t make it six seconds,” he said.

Mr. Long repeatedly measures his temperature and pulse oxygen, and can feel in his chest when “trouble’s coming,” he said. Determined to recover, he tries to walk short distances. “Can I make it to take out the trash?” he’ll ask himself. On a good day, he’ll walk eight feet to his mailbox.

“I’m going to be around to walk my daughters down the aisle and see my grandkids,” said Mr. Long, voice cracking. “I’m not going to let this thing win.”