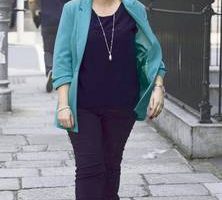 Health Minister Simon Harris said he had no advance notice that his chief medical officer Dr Tony Holohan was writing to a leading CervicalCheck patient advocate accusing her of making “baseless” allegations to a journalist which she should not repeat in public.

The letter was sent last March to Lorraine Walsh, a cervical cancer survivor from Galway.

Mr Harris was representing the Government in California at the time as part of St Patrick’s Day celebrations.

Dr Holohan took offence when his department was contacted by a journalist for response to alleged comments by Ms Walsh.

She was reported as being allegedly critical of Dr Holohan’s role in handling the crisis in the early stages in April last year.

It was claimed she called for his resignation.

His letter said she should expect a “very strong response” if she made the comments in public .

He also referred to “tweets in which you have made baseless allegations against me which are at variance with the facts”.

He invited her to take part in a “mediated discussion” about the “false beliefs”.

Correspondence followed between both but due to various reasons, including Ms Walsh’s recovery from treatment for side-effects of her illness, it did not happen.

The correspondence was obtained under Freedom of Information by Labour TD Alan Kelly.

A spokeswoman for the Department of Health said Mr Harris “was not aware of the letter in advance of it being sent to Ms Walsh”.

The original documents were released with an accompanying cover letter from the department putting it “in context”.

The department spokeswoman said yesterday: “The minister accepts the context as outlined in the Freedom of Information request.

“The minister is in regular contact with the patient advocates and believes it is vital we support them and ensure their input is valued and respected, as does the Department of Health.”

He, the chief medical officer and the patient advocates were united in their goal of effectively eradicating cervical cancer within a generation, said the spokeswoman.

However, Mr Kelly claimed the correspondence shows “the toxic atmosphere” that has existed between officials and those who have sought answers on the CervicalCheck scandal.

He referred to the recent report on CervicalCheck by DCU president Brian MacCraith that the culture of engagement between patient representatives and the Department of Health is not positive.

“I am really surprised the Minister for Health dragged his feet for so long on releasing this information but the contents help explain this,” he said.

“I requested this by parliamentary question in July, and it was only when the Ceann Comhairle threatened the minister with laying a report in the Dáil on non-compliance that the information was released simultaneously with a part response and FoI request.”