Half of H.I.V. Patients Are Women. Most Research Subjects Are Men.

Inspired by reports of a second patient apparently freed of infection with H.I.V., the virus that causes AIDS, scientists are pursuing dozens of ways to cure the disease.

But now, researchers must reckon with a longstanding obstacle: the lack of women in clinical trials of potential H.I.V. treatments, cures and vaccines.

Women make up just over half of the 35 million people living with H.I.V. worldwide, and the virus is the leading cause of death among women of reproductive age. In Africa, parts of South America and even in the southern United States, new infections in young women are helping to sustain the epidemic.

Women and men respond differently to H.I.V. infection, but clinical trials continue to rely heavily on the participation of gay men. Trials of potential cures fare particularly poorly in this regard.

A 2016 analysis by the charity AMFAR found that women represented a median of 11 percent in cure trials. Trials of antiretroviral drugs fared little better; 19 percent of the participants were women.

Vaccine studies were the closest to equitable participation, at 38 percent.

“If we’re going to find a cure, it’s important that we find a cure that actually works for everybody,” said Rowena Johnston, AMFAR’s director of research.

There are well-known differences in the immune systems of men and women. The flu shot produces a much stronger immune response in women, for example.

The response to H.I.V. infection seems also to differ. The immune system in women initially responds forcefully, maintaining tight control over the virus for five to seven years.

But over the long term, this state of high alert takes a toll. Women progress faster to AIDS than infected men, and are more likely to have heart attacks and strokes.

“There are all sorts of differences between men and women, probably mediated partially by hormonal effects,” said Dr. Monica Gandhi, professor of medicine at the University of California, San Francisco.

For example, the female hormone estrogen seems to lull H.I.V. into a dormant state. That may sound like a good thing, but the dormant virus is harder for the immune system, or drugs, to kill.

Some differences may be evident even before puberty: In one study, all but one of the 11 children who were “elite controllers” — people who seem to suppress H.I.V. to undetectable levels without drugs — were girls. 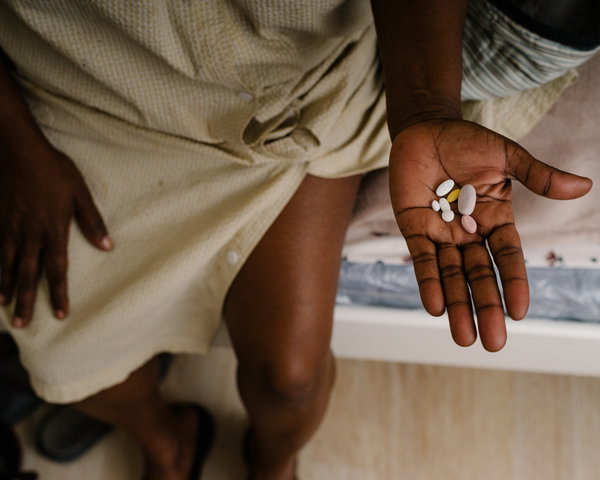 Dolutegravir may increase the risk of neural tube defects in children born to women taking the drug, researchers have found. Nevirapine is far more likely to cause a severe rash in women than in men — yet men accounted for 85 percent of the trial subjects in which the drug was tested.

These sex differences are likely to be germane to trials of potential cures, most of which are exploring ways to energize the immune system to kill H.I.V.

The number of men — and gay men in particular — in H.I.V. trials has always surpassed the number of women. Early on, the epidemic was largely concentrated in gay men, who enrolled to gain access to new drugs as early as possible.

Gay men “were literally dying to get into these trials,” said Jeff Taylor, 56, an H.I.V. advocate in Palm Springs, Calif., who enrolled in dozens of trials after his diagnosis in 1982.

Now, 30 years later, “it’s the same group of people, who understand the value of clinical trials.”

Gay men have formed strong support networks that alert potential participants to clinical trials, and they often live in cities where the research is conducted.

By contrast, women with H.I.V. tend to be isolated, and may not advocate for themselves. They may need help with child care or transportation, or be more comfortable with female doctors — accommodations few trials offer.

For women of color, there is an additional hurdle: mistrust resulting from a long history of exploitation by medical researchers. “It’s a lot of stigma still in our community around research,” said Ublanca Adams, 60, who is living with H.I.V. in Concord, Calif.

Scientists do not seem to know how to gain that trust, she said: “How information is given out to our community and our people is just not in a way to be inclusive, nor is it inviting.”

Ms. Adams said she has enrolled in a few observational studies, but does not trust scientists enough to participate in tests of a treatment or cure.

In the rare cases where scientists go the extra mile to enroll women, they face additional scrutiny from the Food and Drug Administration. (The agency has strict rules for including women of childbearing age.)

Most researchers simply opt for the easy way out and enroll men, collecting data from women only after a drug is on the market.

Two recent trials of long-acting antiretroviral drugs — which can be injected monthly instead of taken by mouth daily — have managed to attract significant numbers of women: 33 percent of participants in one study, and 23 percent in the other.

But because of the promise of less frequent treatment, these trials were hugely popular and so had an easier time recruiting women than most.

“Patients lined up outside the clinic,” said Dr. Kimberly Smith, head of research and development at Viiv Healthcare, the company that led the research.

In general, though, Dr. Smith said, trials in the United States struggle to enroll women, because about 75 percent of the infected still are men.

Anticipating the need to test cures in young women, Dr. Bruce Walker and his colleagues at the Ragon Institute of M.G.H., M.I.T. and Harvard have set up a group called Fresh in South Africa. Nearly 2,000 young women in the Umlazi Township check in twice weekly to be tested for H.I.V.

The researchers provide preventive therapy, but a small proportion of the women still become infected. Dr. Walker’s team is tracking their infections from the start and planning to test cures in the group.

“Some of the hard scientists dismiss this type of discussion as being more socially determined, or some sort of women’s liberation thing,” she said.

Dr. Scully led the only cure trial so far to focus solely on women, testing whether a drug that blocks estrogen makes it easier to kill H.I.V. From the start, the investigators had to make some concessions.

To skirt the restrictions limiting participation by women of childbearing age, Dr. Scully and her colleagues recruited menopausal women. But these participants have lower levels of circulating estrogen, which may skew the results.

Still, the team has already made one key discovery.

“We were one of the fastest trials ever to enroll,” Dr. Scully said. “Women are ready to be engaged.”