Guidelines on how to feed your baby are shifting… again

If you’re confused about what babies are meant to eat and when to start them on solids, you’re not alone. The guidelines have changed dramatically in the last century, flip-flopping all over the shop, and some experts believe it is time for another update.

Once, allergenic foods were avoided, now they are recommended within the first year. Once, babies were rarely starting solids before nine months, then not before four months, and now rarely before six months. And it was previously recommended that babies' first foods were toast and broth, while now they are more likely to be puree or rice-cereal. 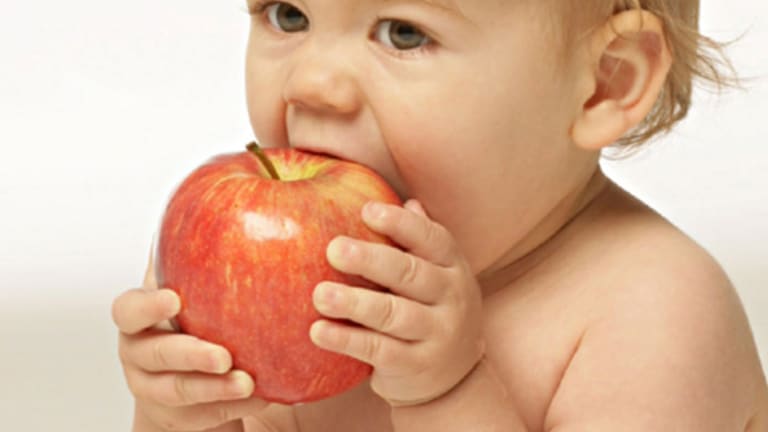 Many parents and experts are giving the control back to the baby.

It was about a hundred years ago, in response to high infant mortality rates, that "mothercraft" – which was mostly male doctors teaching mothers how to… mother – was introduced.

Some of it was positive: the importance of breastfeeding was recognised and encouraged and, for mothers who couldn’t, sterile alternatives were introduced helping to address the mortality rates.

Other aspects were questionable. If you’ve heard the saying that babies should only be "put to the breast" every three to four hours for a maximum of 15 minutes, that is the fault of "mothercraft".

“A baby cannot be expected to thrive if the mother is not regular and punctual,” wrote international mothercraft expert Dr Truby King in his 1913 book, Feeding and care of baby.

Feeding at night was an even graver offence, according to King, and would lead to a lifetime of hysteria, insomnia, disobedience, constipation, epilepsy and “other grave nervous disorders”.

If the baby did not thrive on the “punctual” schedule or the mother could not breastfeed for any reason, she should supplement with "humanised" milk; a concoction of sterilised cow’s milk, sugar and boiled water, with cod liver oil and peanut oil sometimes thrown in as well.

After nine months, babies were given a crust of bread or “dry, crisp toast to train the early powers of munching and chewing”, with King pointing out there was “no need for using mush at all”.

Fast forward to 2018 and mush is recommended as the first food, we start babies on solids younger, on-demand feeding is encouraged and the types of first foods are different.

The argument against rice cereal

“Include iron fortified baby rice cereal as one of your baby’s first solid foods.”

There’s a reason this is an official recommendation: it’s non-allergenic, easily digestible and, when it is iron-fortified, it provides an important first nutrient.

But, now that we’ve moved on from avoiding allergenic foods, why do we still recommend it, especially when it doesn’t naturally contain iron and has relatively high levels of arsenic?

Earlier this year, a US report found six times more arsenic in infant rice cereal than in infant cereals made from other grains. It led Marion Nestle, a professor of Nutrition, Food Studies, and Public Health at New York University to comment:

“Infant rice cereals are a special concern because it is often the only cereal fed to infants and arsenic adversely affects infant cognitive development… It seems pretty obvious that infant rice cereals should be removed from the market unless they can show much lower arsenic levels.”

Gill Rapley, a public health nurse and a leading expert on baby-led weaning says arsenic isn’t the only concern with iron-fortified cereals, including rice cereals.

“For years we’ve been starting babies not just on cereal but iron-fortified cereal and instead of recognising that cereal doesn’t have the nutrients a six-month-old baby needs, we’ve fortified it,” Rapley says. “It doesn’t make any sense.”

Natasha Murray, Accredited Practising Dietitian and spokesperson for the Dietitians Association of Australia, reassures that arsenic levels from Australian rice are “within normal levels” and rice cereal is “OK” as part of a varied diet.

She adds that rice cereal isn’t necessary from an allergy perspective.

“We know we got [the allergy recommendations] not quite right,” Murray says, adding carers should “not delay” the introduction of nuts and other allergenic foods in babies “unless the child has a reaction to that food”.

Murray agrees that there are better iron-rich options.

“A lamb bone is fantastic, if you choose to eat red meat,” she suggests. “The kids can suck on the lamb bones, get the flavour and (by moving their tongue around the bone) it’s really good for their oral development. Meat is a great first food for babies and it can be ground down.”

Fortified cereals, are “just an alternative”, Murray adds. “The main thing is that people are introducing iron-rich food as one of the first foods.”

How old should babies start on solids?

If you start a baby on solids early, it’s not a sign of an “advanced” baby.

“We know there are lots of increased risks from starting kids on solids too early,” Murray explains. “Up to 12 months, milk or formula should be a child’s main source of nutrition. Food is experimental – it’s about exploring textures and tastes.”

Starting too early can displace their consumption of milk and can increase rates of tummy bugs and gastro. While milk and formula are both sterile, other foods mean introducing different bugs that a young baby's system is not ready to cope with yet.

Waiting too long however can impair jaw and muscle development. Solids are also important for “intellectual stimulation”.

It is now widely agreed that a baby is developmentally ready at about six months old, which is also when their iron and zinc stores begin to fall and their energy needs start to increase.

“Look at your child’s development,” Murray advises. “If they’re sitting with support, if they have good head control, if they’ve lost their tongue-thrust reflex (the tongue does not protrude strongly as food enters the mouth), then they’re ready to start solids.

"Some kids do this a little bit before six months, some start a little bit later, but not before four months.”

Still, as the age for starting solids has shifted from four to six months, the guidelines for what and how they eat have not.

When Gill Rapley became a public health nurse in 1978, the recommendations had recently moved from three-months-old to four-months-old.

“The only way to get food into a four-month-old is pureeing it and spooning it in because they can’t feed themselves,” explains Rapley, who is also a leading expert on baby-led weaning. “When we switched to six months as the recommended way, we didn’t look at how the food was being given.

“A jump from four to six months is a huge leap – that’s time and a half the child’s age and yet the information stayed exactly the same about purees and spoons and nobody thought to update it.

"They need to take account of the fact that this is a different baby we’re talking about. A six month old has different nutritional needs and different abilities.”

Rapley believes the infant feeding guidelines, which still recommend starting with purees, are in dire need of an update.

She is leading a trend towards giving the control back to the baby and simply allowing them to feed themselves. It is a trend that empowers the baby and, preliminary evidence shows, may have more positive outcomes.

In Rapley’s experience, giving the baby actual food, in bite-size pieces, aligns more with the baby’s development at around six months and, when they are able to eat food in this way, indicates they are developmentally ready for solids. 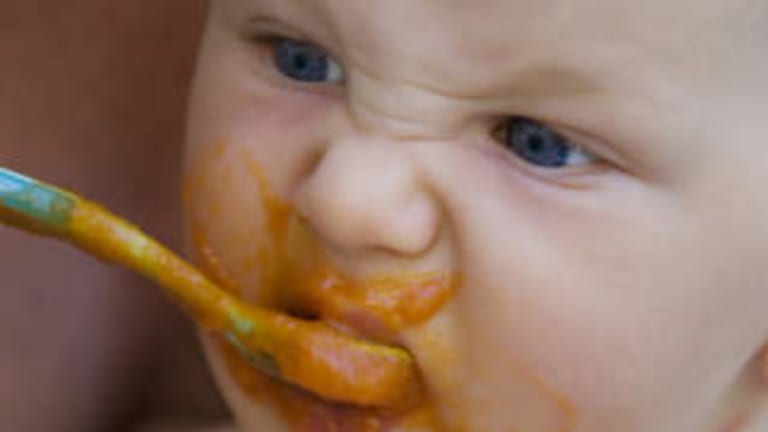 About 1 in 5 babies hate purees from the start.

“If they can’t get it to their mouth, they’re probably not going to be able to chew it or swallow it safely or digest it properly,” she says.

“Our abilities and development keep pace one with another. Most parents, [should] step back and look at what their baby is trying to do – if she is reaching for the apple, give her the apple. Don’t turn around and start pureeing it. She is showing you what she is capable of.”

Baby-led weaning, as the approach is called, allows children to interact with their food (be warned, it’s messy), and learn about it in the process.

“We recognise a strawberry because we have seen one before, we’ve eaten one before – this is all completely new to a baby,” she explains.

“They need to familiarise themselves with it before they’re going to eat it. That’s the normal survival thing – you don’t put something in your mouth without checking it out first.”

“It seems like a lot of the issues with feeding and picky eaters in toddlers has its roots in a loss of control by the baby,” she says. “In fact one of the golden rules for people who work with families where there are feeding problems is to give the control to the child.”

Murray says that many parents prefer purees because they are afraid of their child choking.

“The gag reflex can be strong in certain children,” she explains. “But what we need to do as health professionals is reassure parents and caregivers that gagging is OK and teach the difference between gagging and choking [choking is silent, gagging is not].”

She agrees that fussy eating can have its roots in a lack of control and babies not being able to "play" with their food.

“The more kids interact with foods, the more familiar they become with it and so the more likely they are to try them and eat them,” she says.

“I’ve noticed when babies have issues around food – failure to thrive or growth faltering or fussy eating … it’s often the mums who swoop in and clean them up and won’t let them get messy.”

As for the puree recommendation, Murrays say: “The guidelines do recommend to start with purees simply because it’s a more similar texture and it’s less foreign for the baby.”

Though, she does “worry” when she sees a child still on purees at eight months, saying that babies should progress "quickly" to lumpy and finger foods and, by 12 months, “should be eating family food” provided it doesn’t have salt or sugar.

Are the guidelines likely to change? They have before, so they may well again, as evidence grows.

“Infant feeding guidelines are based on the best evidence we have available to-date. That’s why they evolve and change,” Murray says.

In the meantime, she advises parents should go with what they are comfortable with and pay attention to their baby's development.

“It really depends on your child – about 20 to 30 per cent of children hate purees so be guided by your child. If they are reaching for your food off your plate, as long as it’s not a choking risk and as long as you’re supervising them, let them go for it.”

Related posts:
Health News again, are, baby, feed, Guidelines, how, on, shifting..., to, Your
Health Problems