A little girl has written a heart-wrenching letter to Santa Claus, asking for a new kidney for her brother.

The letter was dropped off at a Lowe’s Home Improvement department store in Franklin, North Carolina, which has a mailbox where children can leave notes for Santa.

Written in green, blue and purple crayon, the message reads: ‘Dear Santa, Some may not believe in you. But I do. One thing I really want for Christmas is my big brother to get a kidney transplant. PLEASE.’

Aside from her name, Kaitlyn, the identity of the girl remains unknown – but her letter has now gone viral with store employees hoping they can find her family and provide them with support. 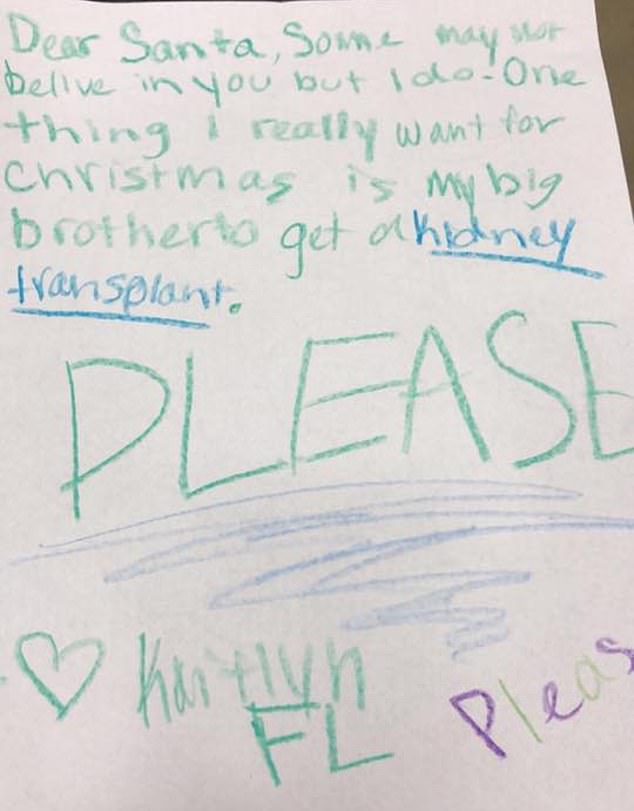 A heart-wrenching letter written by a little girl to Santa Claus, asking for her brother to receive a kidney transplant, was found at a mailbox at a Lowe’s Home Improvement department store in Franklin, North Carolina

Store manager Shelly Thomas told DailyMail.com that she was cleaning out the mailbox on Friday, November 23, as she does on a daily basis when she came across the letter.

‘We take the letters out and sometimes we read them because you never know what the big item will be this year,’ she said.

‘We have these fill-out forms for Santa, but this one was written on the back of one of the coloring sheets. It really touched me.’

Thomas said she first tried looking through video surveillance footage to try to track down the parents or the child, but there was no luck.

After getting clearance from Lowe’s marketing manager, Thomas posted a photo of the note to Facebook.

‘This is a “Letter to Santa” that was left in Santa’s mailbox at Lowe’s of Franklin,’ she wrote. ‘Our company is wanting to see if anyone out there may know who this child is. If you would, please share this so we can possibly get in contact with this family.’

So far, the post has been shared nearly 900 times with some well-wishers saying they’re willing to be tested once the family is found.

Next to Kaitlyn’s name is ‘FL’, leading to Thomas believe the girl’s family may have been visiting from Florida.

‘We haven’t been able to reach the folks but what I really hope is that we find them, give them support, let them know someone cares,’ Thomas said.

‘So many people have said they’re willing to get tested and if we can get even one more person registered [to be an organ donor], it’s all worth it.’

According to the American Kidney Fund, an estimated one in 65,000 US children is suffering from kidney failure, which can affect growth and bone strength.

Kidneys are the body’s natural filters and, when they are not functioning properly, excess waste can build up in the body. A child’s brain development could be affected by this and cause learning disabilities.

Although children can be placed on dialysis, a kidney transplant is considered the best treatment option. 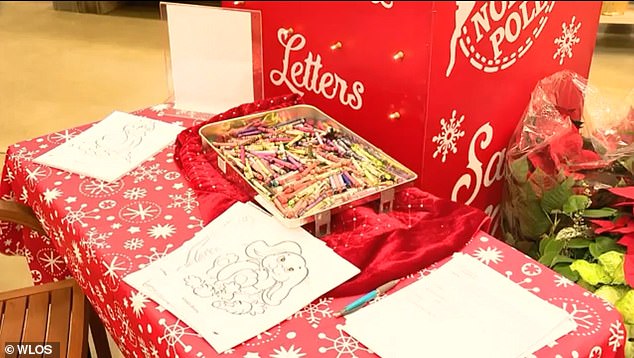 Because the message is signed ‘Kaitlyn FL’, store employees believe the family was visiting from Florida. The note has been shared on social media with workers hoping they can track down Kaitlyn’s family. Pictured: The ‘Letters to Santa’ area at Lowe’s

However, half of all children with chronic kidney disease, will likely require several transplants throughout their lifetimes.

Children older than age two can receive an adult kidney as long as it fits in their body and the child’s own kidneys are generally not removed.

Once the donor’s and recipient’s blood are proven to be compatible, there are two more blood tests, according to Allina Health.

The first is tissue-typing, which looks at the number of antigens, or genetic markers, the donor and recipient share.

The second is cross-matching, which is to ensure the recipient will react to the new kidney.

These are followed by a physical exam, a chest X-ray, a CT scan of the abdomen, a follow-up blood test within a week of the scan, and a 24-hour urine collection.