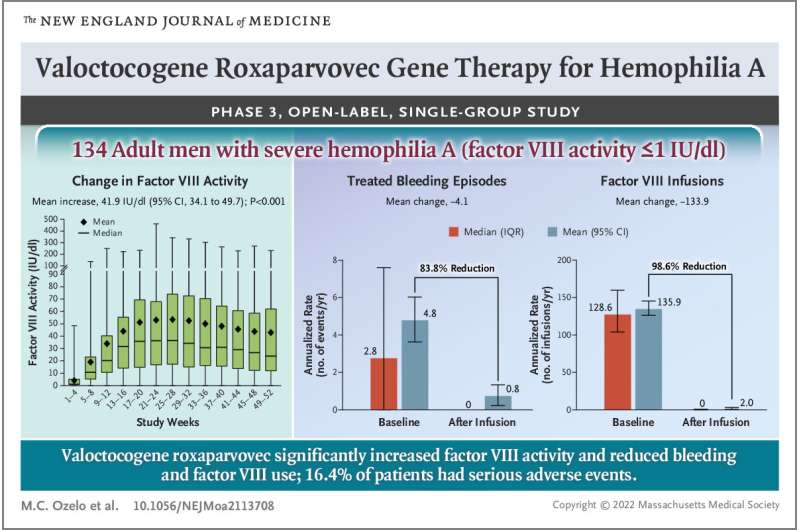 An international team of researchers has found more evidence that a new gene therapy may help some people with hemophilia A. In their paper published in the New England Journal of Medicine, the group describes the characteristics of the clinical trial and provides data regarding the effectiveness of the therapy. Courtney Thornburg, with the Hemophilia and Thrombosis Treatment Center, Rady Children’s Hospital San Diego, has published an editorial piece in the same journal issue outlining the history of gene therapy development for hemophilia A and the work done by the team in this new effort.

Hemophilia A is a genetic disease that impacts the production of a protein called factor VIII—those who have the disease experience blood clotting issues. It more typically impacts male patients because it involves problems with an X chromosome. Hemophilia A is classified into three categories: mild, moderate and severe. In this new effort, the researchers trialed a treatment for male hemophiliac patients with severe symptoms.

Currently, patients with hemophilia A are treated with infusions of factor VIII, and while it is effective at allowing patients to live normal lives, the treatment is considered to be burdensome and expensive. For that reason, researchers have been studying gene therapy. Gene therapy for hemophilia has been pursued for over 20 years, but factor VIII presents more challenges than factor IX (associated with hemophilia B)—this gene therapy, like most others of its kind, involves injecting an adeno-associated virus into a patient, which initiates gene transfer, thereby correcting the problem at its roots.