The US Food and Drug Administration (FDA) has shelved plans to cap nicotine levels in cigarettes to ‘non-addictive’ levels.

In 2017, the agency proposed cutting nicotine levels amid growing concern that young people were becoming hooked.

Twice a year, the FDA updates a list of regulations – a so-called unified agenda – of priorities it plans to work on in the coming year, and the plan was not included on the fall 2019 list, Bloomberg reported.

Upon the news, shares of tobacco giants Altria Group Inc and Philip Morris rose three percent and one percent, respectively. 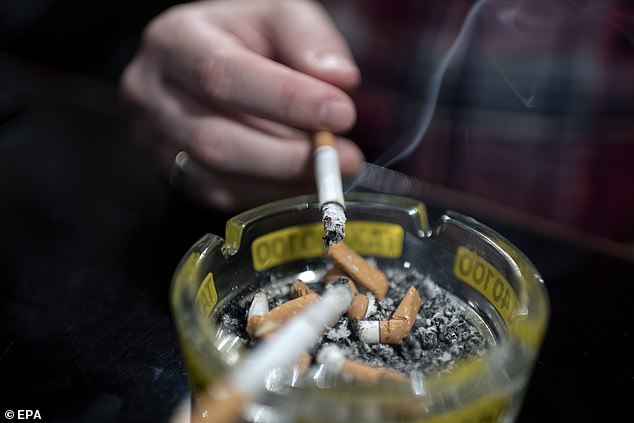 FDA spokesman Michael Felberbaum told Bloomberg that the plan being dropped from the list doesn’t mean the agency will no longer work on it.

Rather, he attributed the delay to regulators reviewing feedback it received about the plan to reduce nicotine levels.

‘The agency has focused on regulations that reflect its most immediate priorities,’ Felberbaum said.

‘FDA continues to gather evidence and data on an ongoing basis regarding all tobacco products.’

Priorities on the updated list include revising regulations on fluoride in bottled water and a rule requiring color graphics depicting the negative health effects of smoking on cigarette packages and in cigarette advertisements.

The plan to cap nicotine levels in cigarettes was introduced in July 2017 by then-FDA Commissioner Scott Gottlieb.

A 2018 study published in The New England Journal of Medicine found that reducing nicotine levels in cigarettes could save 8.5 million lives over the next century.

Additionally, researchers said that it could prevent more than 30 million people from becoming regular smokers.

Tobacco companies such as Altria, the maker of Marlboro, claimed that the move could cost the US almost one million jobs – including retail and tobacco grower jobs.

Gottlieb resigned in April and it’s unclear if the policy will ever be implemented.

‘A sad day for future grandchildren,’ tweeted former FDA Commissioner Robert M Califf upon news of the dropped plan. ‘They will have fewer grandparents because of this.’

The news came the same day that Stephen Hahn, Trump’s pick to lead the FDA, faced a Senate panel during a confirmation hearing.

With more than 20 percent of high school students vaping, senators grilled Hahn about how he would tackle the teen vaping epidemic.

Hahn said ‘aggressive action’ was needed to prevent adolescents from becoming addicted to nicotine, but he did not commit to a ban on flavored e-cigarettes.

In September, the Trump administration vowed to ban flavored vaping products, but the president has since backpedaled on this plan.