A father who has suffered a lifelong battle with cystic fibrosis has finally had a life-saving lung transplant after three false hopes.

James Beeching, of Hastings, East Sussex, had documented his agonising wait on Facebook with candid videos.

He even made poignant recordings for his twins, with wife and primary school teacher, Becky, to remember him by, in fear of his incurable genetic condition.

Now, the 36-year-old can finally walk his children, Isobel and Logan, four, to school.

‘Now I have moments of pure euphoria and find myself crying with joy at how easy life can be,’ Mr Beeching revealed.

‘I can play hide and seek with my kids, walk them to school, bring my wife breakfast in bed – all things that once seemed impossible.’ 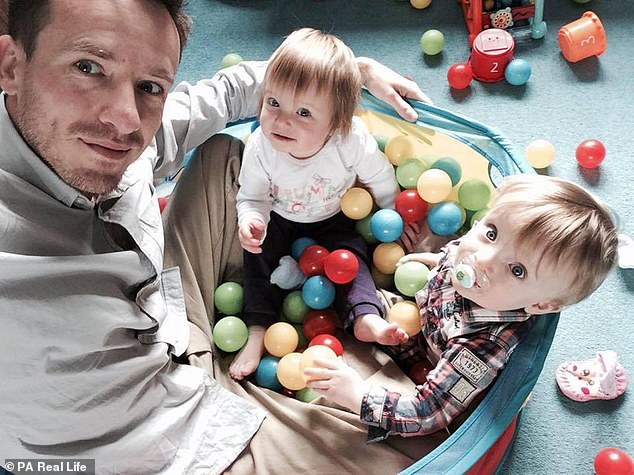 James Beeching, 34, had made a Facebook video directed to his young twins, fearing he wouldn’t survive cystic fibrosis whilst waiting for a lung transplant (pictured with his twins Isobel and Logan) 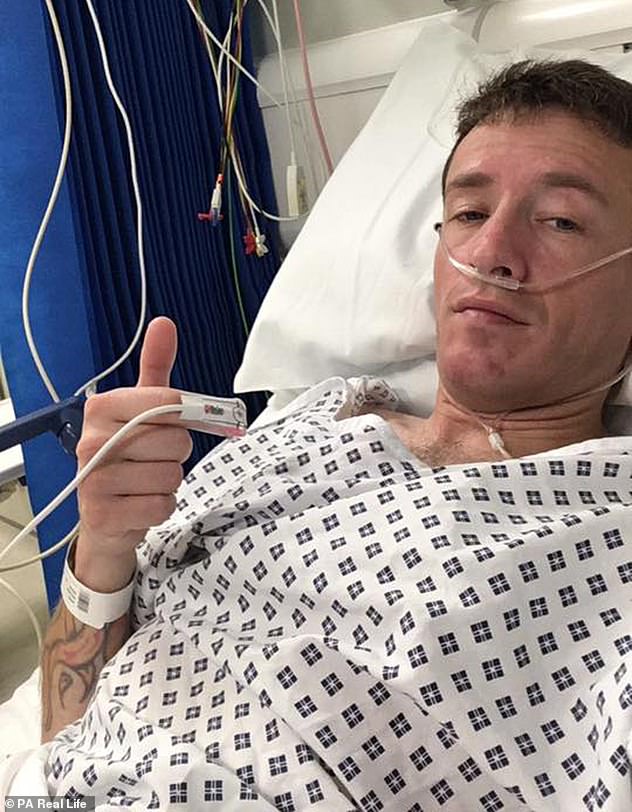 Mr Beeching was added to the donor waiting list in 2017, but his health deteriorated over the year, rarely spending time out of hospital (pictured in hospital last September) 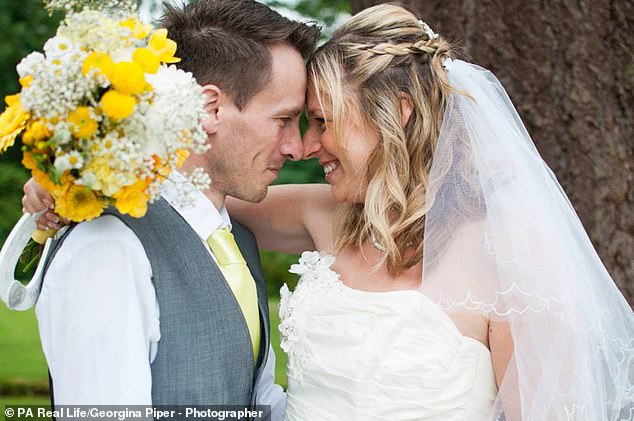 Mr Beeching, from Hastings, is overwhelmed with joy after finally getting a lung transplant for cystic fibrosis after three false hopes. Above, with his wife Becky, 34, on their wedding day

Mr Beeching, a former community fundraiser, was just two when he was diagnosed with cystic fibrosis – which causes the lungs to become clogged with sticky mucus.

He had a relatively normal childhood, except for undergoing daily physiotherapy and enzymes that he took with every meal to aid digestion.

Then, in his late teens, his hospital stays increased, as his body became unable to fight off simple infections.

WHAT IS CYSTIC FIBROSIS?

Cystic fibrosis is an incurable genetic disease that affects around 70,000 people worldwide.

A defective gene causes a build-up of mucus in the airwaves, making it increasingly difficult to breathe over time.

Mucus also blocks the natural release of digestive enzymes, meaning the body does not break down food as it should.

While healthy people cough naturally, that does not happen for people with CF.

Eventually, lung function depletes to the point that sufferers will need a double lung transplant to survive.

His lung function was also in a continuous decline, leading to his assessment for a transplant, before he was added to the waiting list in January 2017.

Worried his time would run out, he made a heart-wrenching video talking to his twins.

The video was shared more than 16,000 times, amassing thousands of likes and comments.

He said at the time: ‘I decided to make the video, too, because I wanted them to see and hear me, and if I go in the next couple of years they may not be able to do that from memory.

‘Now, they’ve got something to watch when they’re at an age where they can understand death.’

After that, Mr Beeching’s health deteriorated more and more, and his hospital admissions got longer.

He said: ‘I’d rarely be out of hospital for more than three or four weeks, before I’d need to go back in for more intravenous antibiotics.’

Then, in April 2018, Mr Beeching contracted a particularly nasty infection, which he feared could spell the end. 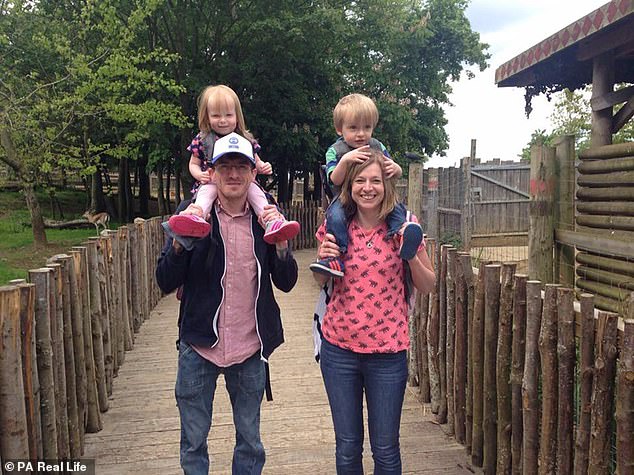 Mr Beeching was diagnosed with cystic fibrosis at the age of two, an incurable disease which causes the lungs to become clogged with sticky mucus. Above, Mr and Mrs Beeching with their two children, Isobel and Logan. 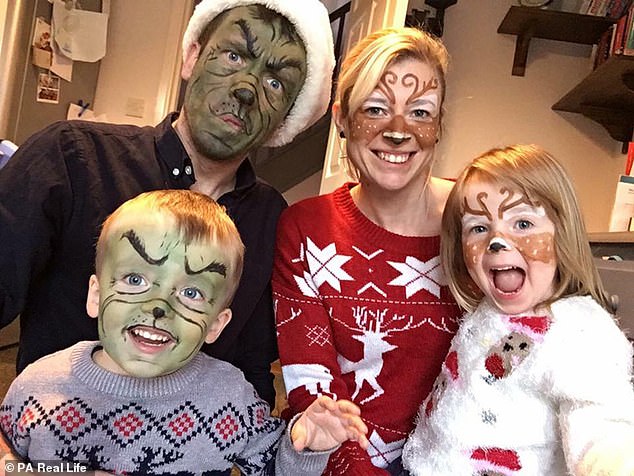 Mr Beeching and his family at Christmas 2017, almost a year after being added to the donor waiting list. In April 2018, Mr Beeching contracted a particularly nasty infection, which he feared could spell the end (pictured with his wife and twins during Christmas 2017) 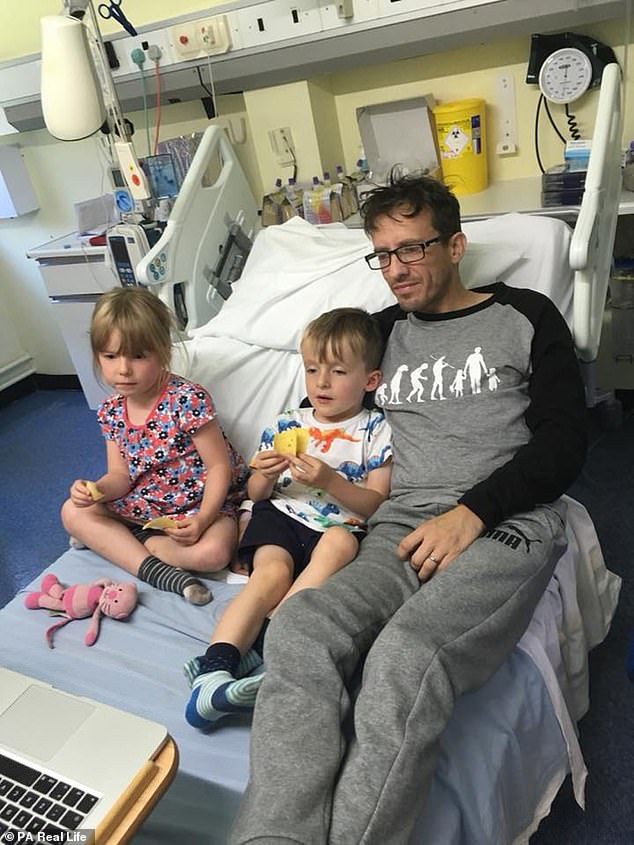 ‘Life became more difficult and my body was really struggling’: Mr Beeching, with his children in hospital, said his wait for a transplant was exhausting

Completely coincidentally, just a day after his admission to west London’s Royal Brompton Hospital to be treated, he received a phone call telling him some donor lungs had potentially become available.

Racing across the city, he arrived at Harefield Hospital in Hillingdon, Greater London – one of the most experienced centres in the world for heart and lung transplants – to await his news.

Disappointingly, the lungs were unsuitable. He said: ‘False alarms do happen, so while it was emotional, it didn’t shock me.

‘I decided to record a Facebook video that night, thanking people for their support so far and encouraging them to sign up as donors if they wanted to.

‘Looking back at that video now, I can see how unwell I was, struggling to breathe.’

‘That was another false alarm,’ he added. ‘I do understand why this happens and that the organs aren’t always suitable, but it was incredibly emotionally and physically exhausting.’

Just 24 hours later, a third call came through, but, once again, the transplant could not proceed.

Luckily, even without the transplant, Mr Beeching managed to spend the majority of the summer out of hospital with his family, but was still growing weaker all the time.

‘Life became more difficult and my body was really struggling,’ he said. ‘I was needing more and more oxygen and generally finding it hard to keep up.’

Then, in August 2018, Mr Beeching received a fourth call – and this time, the transplant went ahead.

He recalled: ‘I’ve always been a logical, rational person, so I remained calm, all too aware that it could be another false alarm.

‘Then, all of a sudden it was, “James, go get showered, it’s going ahead”.

‘People ask me now if I was scared, but I really wasn’t. I knew this is what had to happen.

‘Without a transplant, I don’t think I’d have made it through this winter. A transplant was my only hope of spending more time with my family.

‘I had also said everything I needed to say to my loved ones back in April when that first call came in.’

Thankfully, the operation was a success and, after five weeks in hospital recovering, Mr Beeching was allowed home. 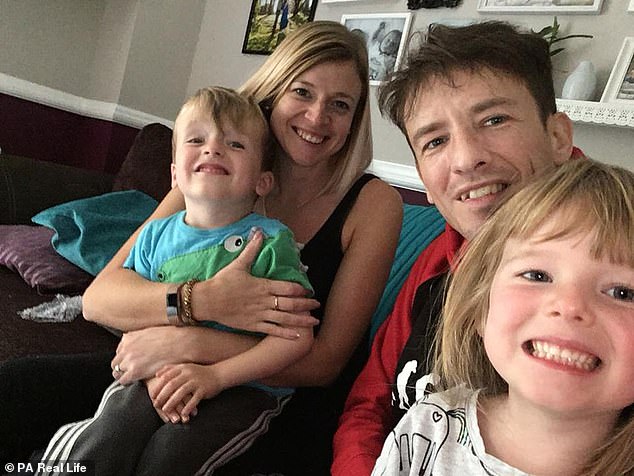 ‘I can play hide and seek with my kids, walk them to school, bring my wife breakfast in bed – all things that once seemed impossible’, Mr Beeching said. Above, with his family after returning from hospital after his transplant 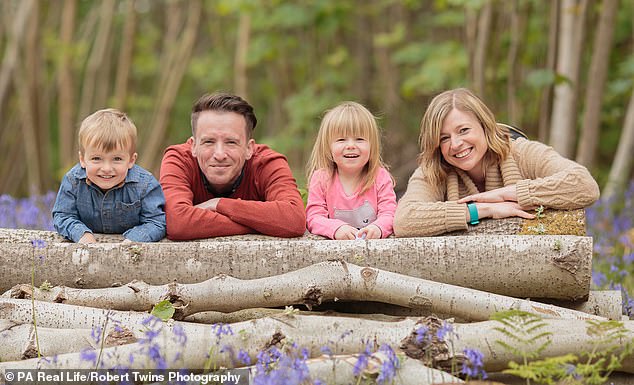 ‘It’s almost like when you buy a second-hand car – at first, every little noise makes you nervous, but you do get more used to it as time goes on’: Mr Beeching said of his new lungs. Above, with his family after recovery

Aside from a couple of complications along the way, he is currently doing very well and his new lungs growing stronger every day.

‘It’s almost like when you buy a second-hand car – at first, every little noise makes you nervous, but you do get more used to it as time goes on’, he said.

He also continues to update his online followers about his progress and is now sharing his story to thank them for their support, as well as to encourage more people to sign up as donors.

He said: ‘There’s no way I could’ve done this by myself. It took an army – a wonderful team of medics, a selfless donor, my amazing loved ones, message after message on social media and my own mental strength.

‘There’s not a day that goes by when I don’t think about my donor and their family. I feel so incredibly humbled and grateful by what they’ve done.

‘In a way, I’m even grateful to my own lungs. It’d be easy to want to be rid of them and think they didn’t work, but actually, they got me through 36 years and helped me travel, meet my wife, have my two children and build a beautiful home.

‘If people don’t want to be organ donors, I’m not out to change that, as it’s a very personal decision. It always shocks me, though, to hear how many do want to, but haven’t got round to joining the register.

‘It takes less than two minutes and it’s important to remember to share your wishes with loved ones, too, but I hope I can show that transplants do work. They help people live for many more years, and live well.’