A factory worker has relearned how to walk after his feet were severed in an accident and sewn back on.

The unnamed man’s legs became trapped in a ribbon blender, which is commonly used to mix dry solids, in December 2016 while he was working a night shift in his native Bangkok.

Paramedics scooped up the patient’s torn off feet and rushed him to hospital.

At just after midnight, doctors called a top reconstructive surgeon, who got out of bed and reportedly raced to the emergency ward.

The medic worked through the night, re-attaching the patient’s bones, ligaments, blood vessels and nerves, before inserting steel rods to hold the severed limbs in place.

Nearly three years on, the man has only just learnt how to walk again and has returned to his job at the same factory.

Scroll down for video 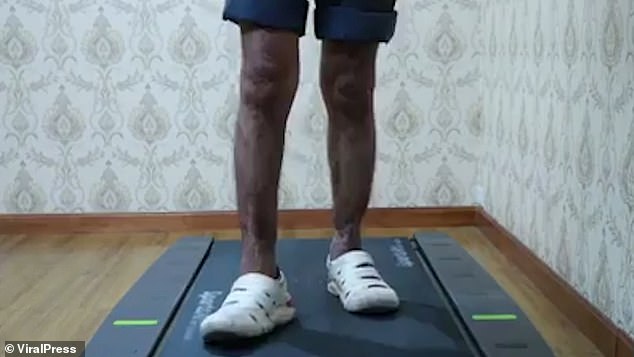 An unnamed man has relearned how to walk after his feet were severed in an accident and sewn back on. The factory worker’s limbs became trapped in a machine during a night shift 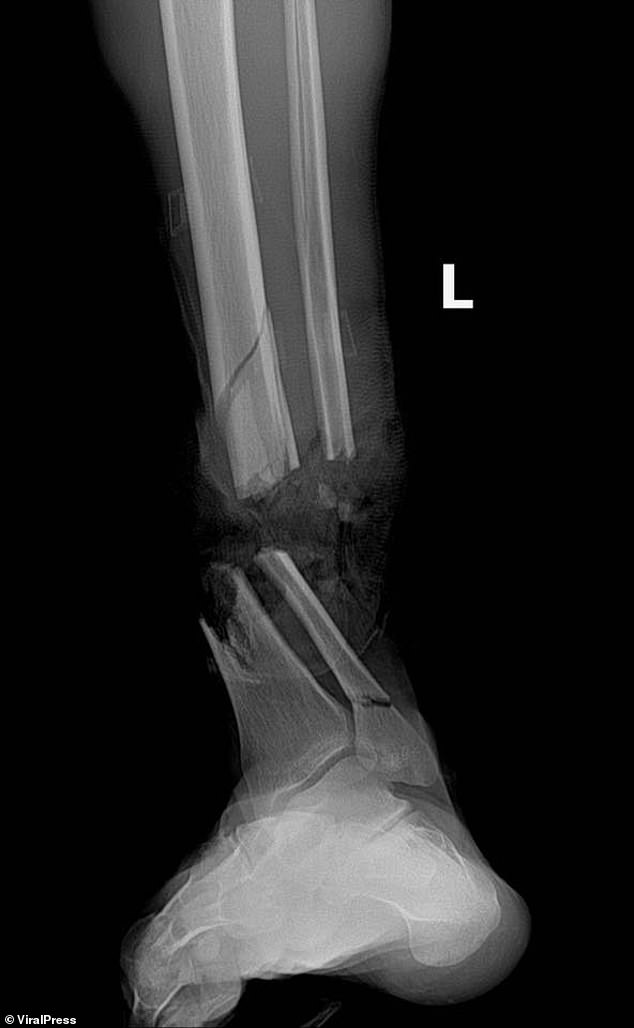 X-ray shows the severed ankle. This occurred when the man’s legs got caught up in a ribbon blender, which is commonly used to mix dry solids, in December 2016 in a factory in Bangkok 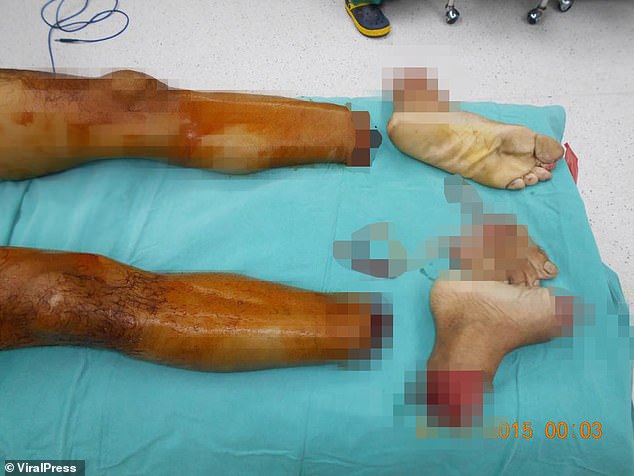 The man’s feet were completely severed, as were the toes on his right foot

The man reportedly passed out during the accident. When he woke, he was amazed to find that not only was he alive, but his feet had been reattached.

When surgeon Dr Wichit Siritattamrong received the late-night call, he rushed to the private hospital Chulalat 3, where the patient was being held. The operation took seven hours.

Due to the severity of the man’s condition, the medic placed a steel rod around his legs, which stayed there for three months. Internal rods were left in place for another two years.

This was to allow his legs to retain their form while his bone merged back together.

The patient was wheelchair bound for years, before finally becoming strong enough to have physiotherapy.

‘After two years without walking, the brain has forgotten how to walk,’ Dr Siritattamrong said.

‘The man needed to learn the process all over again, which took him almost a year.

‘It has taken three years of rehabilitation but he is able to walk around almost like a normal person.’ 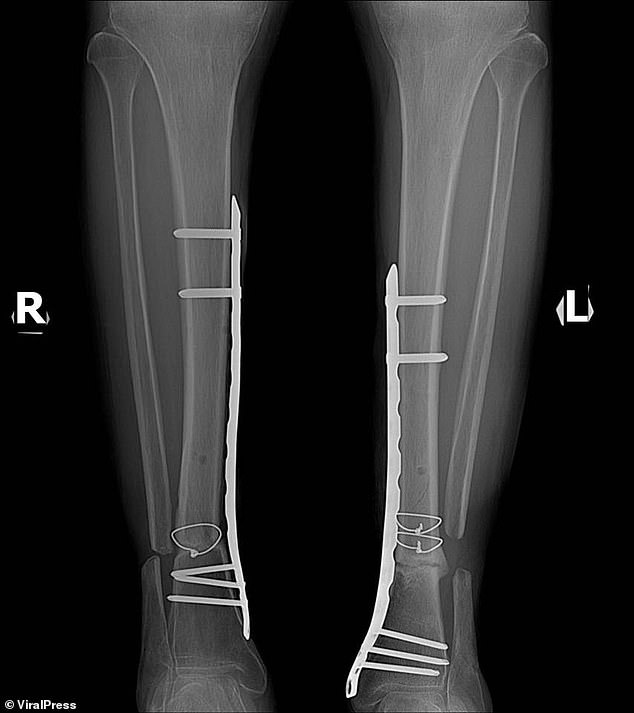 A reconstructive surgeon was woken just before midnight and rushed to the hospital where the patient had been taken. He worked through the night, re-attaching bones, ligaments, blood vessels and nerves. He then inserted steel rods (pictured in X-ray) to hold the limbs in place 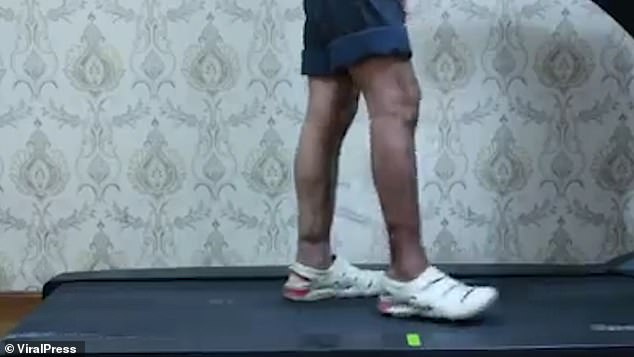 The patient was wheelchair bound for years, during which time he ‘forgot how to walk’. After a year of intense physiotherapy, he can now get about ‘almost like a normal person’

HOW IS A SEVERED LIMB RE-ATTACHED TO THE BODY?

Re-attaching a severed limb first requires blood flow is restored to the area by reconnecting the arteries and veins.

This is easier in a ‘clean cut’. Ears, which are often ripped off, are tricky due to their small arteries.

If blood cannot flow out of the severed part, it will swell and cause tissue damage.

Leeches may be used to suck up blood to prevent it building up.

The cells in the severed tissue must also still be ‘alive’.

Once the blood vessels have be re-attached, surgeons must then get to work on the tendons, bones and nerves.

In some cases, doctors may regrow a severed limb on one part of the body before reattaching it elsewhere.

This is often due to other parts of the body having a richer blood supply.

Full limbs usually have to be reattached within just six to seven hours.

This is due to their muscle having a faster metabolism than other kinds of tissue, such as that in the fingers.

Dr Siritattamrong previously stitched a man’s hand back together after it was torn into three pieces by a plastic-recycling machine.

‘I don’t want to be famous from these cases’, he said.

‘I want to use my work to inspire people, so patients can read about them with hope in their heart, while other doctors can read them and push them to keep improving and helping people.’

Dr Siritattamrong added, however, the surgery is risky and less experienced medics should not attempt it.

‘When these kinds of accidents happen the important issues that should be considered are, firstly, if the patient can use that organ again,’ he said.

‘Another is about the beauty of the result – will it look normal? If one issue among the two is positive, then it is worth performing the surgery.’

Dr Siritattamrong claims he does not feel under any pressure during the operations but admits it is difficult to ‘deal with the expectations of patients’.

‘I have been working as an orthopedic hand and reconstructive surgeon for over 31 years’, he said. ‘Honestly, this situation is pretty normal to me.

‘But the most hard part was dealing with the expectation of patients and their relatives. They always expect everything to be perfect, which is impossible.’ 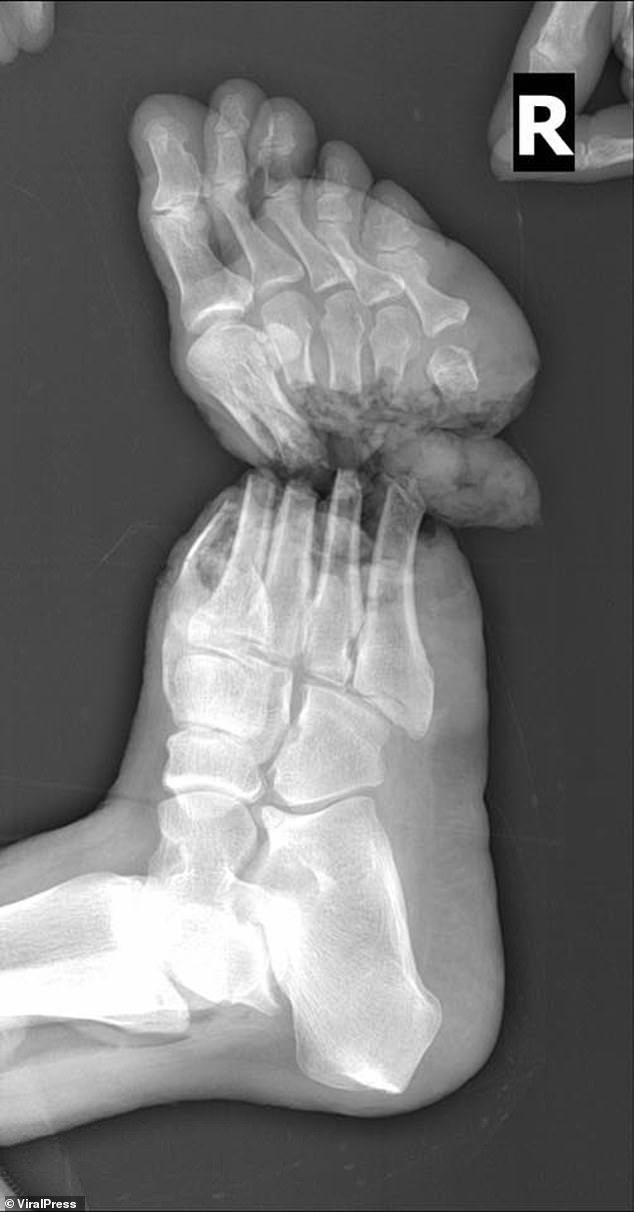 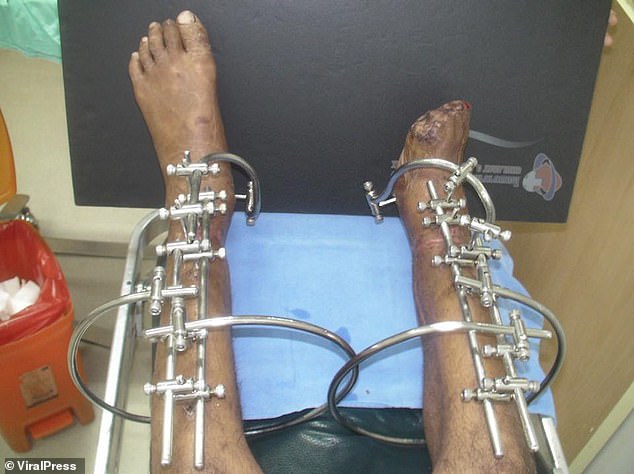 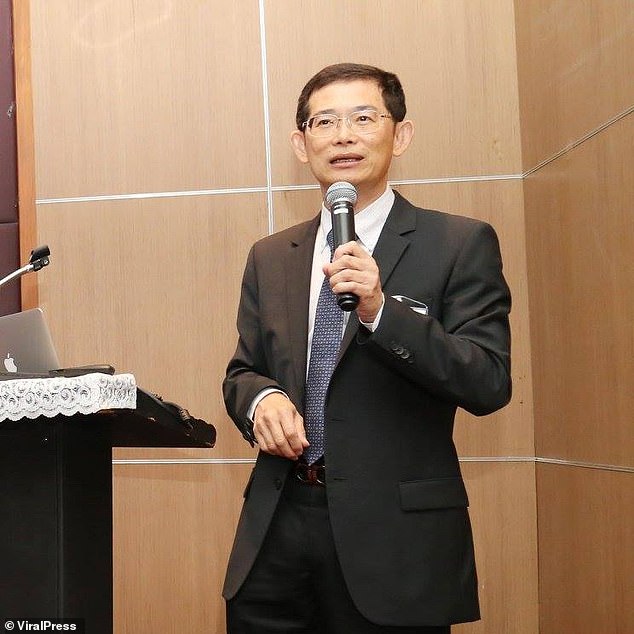 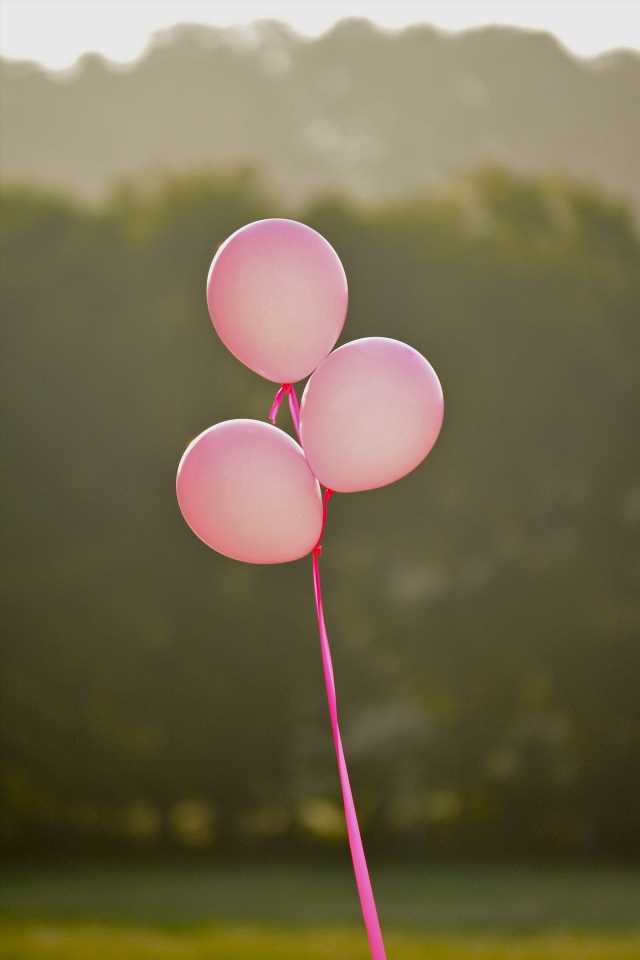 They Thought She Drank, But Her Body Actually ‘Auto-Brewed’

World must prepare for ‘potential pandemic’: WHO chief
Kids Health