Extremely warm temperatures may be to blame for the worldwide spike in cases of dengue fever this year, a professor has warned.

The viral infection, spread by mosquitoes, is said to have ‘ravaged Southeast Asia’, killing hundreds of people.

Vietnam alone reported 115,186 dengue cases as of July 20, compared to just 29,000 for the same period last year, according to figures.

The Philippines is also experiencing an unusually severe outbreak, prompting health officials to declare it a national emergency. There were 146,062 reported cases as of July 20. This is compared to just 69,000 over the same period in 2018.

Dr Rachel Lowe, of the London School of Hygiene & Tropical Medicine, has warned mosquitoes thrive in warm climates, with July being the hottest globally on record. 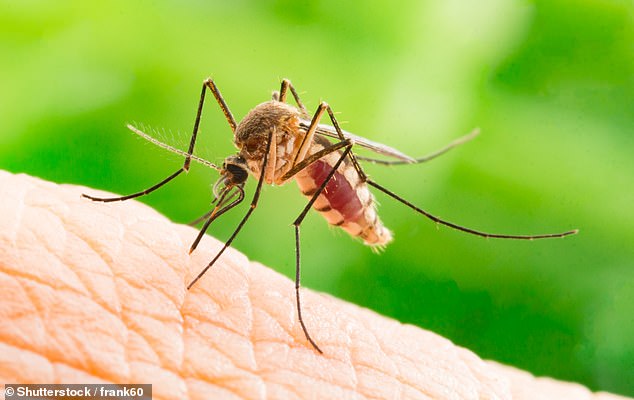 ‘Extremely warm temperatures’ may be to blame for this year’s worldwide spike in dengue fever, a professor has warned. The infection is spread by certain mosquito species (stock)

Dengue fever is usually mild, with symptoms including fever, a severe headache and pain behind the eyes.

There is no cure or specific treatment, with most cases passing in around a week, without any lingering complications.

Elderly patients, or those with other medical conditions, may develop severe dengue fever.

This can lead to blood in the urine, organ failure and respiratory distress – when the lungs cannot provide the vital organs with enough oxygen.

Dengue is a viral infection spread by mosquitoes.

It is caught by people visiting or living in Asia, the Caribbean, and North, South or Central America.

Mosquitoes in the UK do not spread the virus.

In most cases, the infection is mild and passes in around a week.

There is no cure or specific treatment.

Patients can relieve their symptoms via painkillers, staying hydrated and resting.

In rare cases, dengue symptoms can develop into severe dengue.

Elderly patients, or those with other medical conditions, are most at risk.

Severe dengue fever symptoms can include:

Severe dengue is usually treated via a blood and platelet transfusion, IV fluids for rehydration and oxygen therapy if levels are low.

Dengue is ‘widespread throughout the tropics’, with ‘local variations in risk influenced by rainfall and temperature’, according to the World Health Organization (WHO).

The Aedes aegypti is the main mosquito that spreads dengue, along with yellow fever and Zika.

It thrives in tropical climates and breeds in stagnant pools of water.

Thailand declared a state of emergency after reporting 43,200 dengue cases as of August 4, European Centre for Disease Prevention and Control statistics show. This is compared to 28,100 for the same period last year.

And it’s not just Asia that is affected. As of August 3, more than two million suspected and confirmed cases were in the ‘Americas region’, according to the Pan American Health Organization.

This is almost four times more than the 584,263 incidences in 2017-to-18, WHO statistics show. Brazil, Colombia, Honduras and Nicaragua are the worst affected, according to the ECDC.

Mosquitoes in the UK do not spread the dengue virus.

Dengue infections have been on the rise since the 1970s due to increasing temperatures and irregular monsoon seasons, which are linked to climate change, Yahoo reported.

International travel is also said to have allowed the virus to be carried across the globe to new, vulnerable populations.

Some experts even blame the use of plastic containers, pools and plant pots for providing the ideal breeding ground for mosquitoes.

Gawrie Loku Galappaththy, a dengue specialist at the WHO in the Philippines, told Yahoo: ‘When you have a drought, people collect water in containers.

‘That is one place the dengue mosquito loves to breed.’