A team of scientists from the USA and Belgium has recently revealed that the ErbB family of receptor tyrosine kinases play a vital role in regulating severe acute respiratory syndrome coronavirus 2 (SARS-CoV-2) lifecycle in host cells and that inhibition of these receptors can protect against SARS-CoV-2-induced acute and chronic lung injuries and inflammation. The study is currently available on the bioRxiv* preprint server.

Since the beginning of the coronavirus disease (COVID-19) pandemic, the development of therapeutic and preventive measures against SARS-CoV-2 has been the primary area of focus in global research. Many potent vaccines have been developed at record speed, in addition to repurposing already approved antiviral medicines to tackle SARS-CoV-2 transmission.

Currently, the standard of care treatments for in-hospital severe COVID-19 patients include corticosteroids, interleukin receptor antagonists, and antiviral medicine remdesivir. Although capable of reducing symptom severity and disease progression, none of these medicines have shown life-supporting efficiency in these patients.

In the current study, the scientists have conducted a high-throughput screening to identify compounds that can protect mammalian cells from SARS-CoV-2-induced lethality.

The scientists screened a total of 4,413 bioactive compounds and FDA-approved drugs to identify potent anti-SARS-CoV-2 compounds. In the high-throughput screening, the ability of these compounds in inhibiting SARS-CoV-2-induced cellular lethality was investigated.

A total of 18 candidates were identified and tested for their efficacy in preventing SARS-CoV-2 infection in a dose-dependent manner. Of 18 compounds, 17 showed potential antiviral effects without causing toxicity. Of these compounds, 12 were effective at low micromolar concentrations. The final panel of compounds includes inhibitors of ErbB receptor tyrosine kinases, NUMB-associated kinases, heat shock protein 90 (HSP90), and cell membrane ion transporters.

The majority of identified compounds showed potent antiviral efficacy against different RNA viruses in a dose-dependent manner. Based on the antiviral efficacy, the scientists selected an already approved pan-ErbB inhibitor, lapatinib, for further experiments. 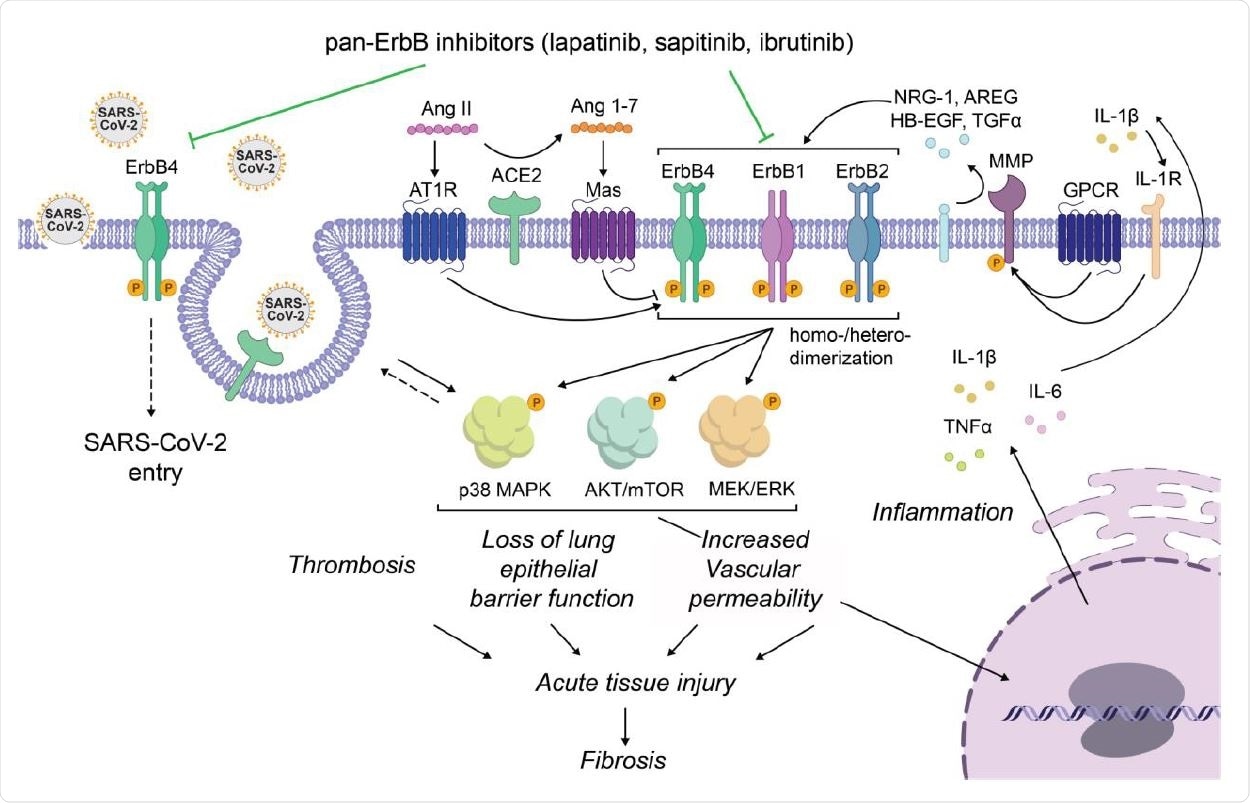 Proposed model for the roles of ErbBs in the regulation of SARS-CoV-2 infection and pathogenesis and the mechanism of action of pan-ErbB inhibitors. By inhibiting ErbB4, lapatinib suppresses SARS-CoV-2 entry. By inhibiting pan-ErbB activation by various ligands and unopposed Ang II effect, lapatinib inhibits activation of signaling pathways known to be activated and deleterious in severe pandemic coronaviral infections, thereby protecting from inflammation and tissue injury.

Antiviral mode of action of lapatinib

There are three catalytically active members of the ErbB family: ErbB1, 2 and 4. Among 7 molecular targets of lapatinib, siRNA-mediated depletion of ErbB4 resulted in about 85% reduction in virulent SARS-CoV-2 infection and viral entry. These findings highlight the involvement of ErbB4 signaling in mediating SARS-CoV-2 host cell entry.

Findings obtained from a panel of in vitro assays confirmed that ErbB4, but not the other members of ErbB family, is the primary target of lapatinib and that lapatinib exerts its anti-SARS-CoV-2 activity by inhibiting ErbB4 phosphorylation.

In both in vitro and ex vivo setups, lapatinib treatment has been shown to suppress SARS-CoV-2-induced inflammation and lung tissue injury.

Dr. Sanchari Sinha Dutta is a science communicator who believes in spreading the power of science in every corner of the world. She has a Bachelor of Science (B.Sc.) degree and a Master's of Science (M.Sc.) in biology and human physiology. Following her Master's degree, Sanchari went on to study a Ph.D. in human physiology. She has authored more than 10 original research articles, all of which have been published in world renowned international journals.