Emollient creams can build up in clothes and lead to FIRE DEATHS whether they have a high paraffin content or not, health officials warn

Moisturisers can be soaked up by clothes and bedding, making them catch fire more easily and potentially kill people, medical experts have warned.

The lotions are absorbed by clothes, which can burn faster if they catch fire – 50 people in the UK are already thought to have already died as a result.

Emollients containing paraffin were already known to be flammable, but the warning has now been extended to include all skin creams. 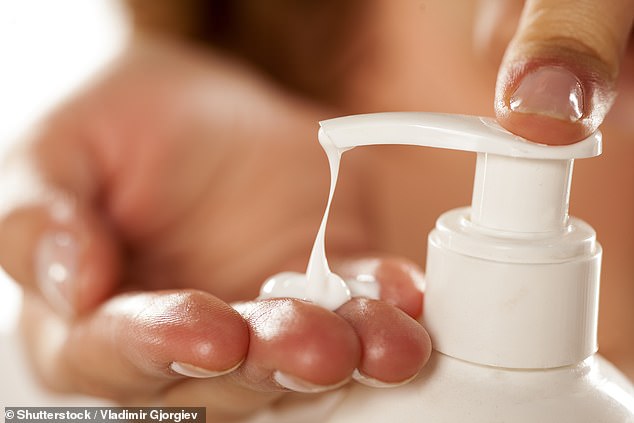 Emollients, which include moisturisers, lotions and ointments, should carry fire warnings because they can build up in clothing and make garments extra flammable, experts say

People using creams for dry and itchy skin conditions, such as eczema or psoriasis, are warned their clothes could still be a fire hazard even after they’re washed.

Smokers are particularly at risk, said one fire expert, who added people have died because they didn’t know cigarette embers could ignite their skin cream.

‘We don’t want to unduly worry people into not using these products which offer relief for what can be chronic skin conditions,’ said June Raine, director of the MHRA’s risk management division.

‘But it is equally important people are aware of the risks and take steps to mitigate them.’

Emollients with less than 50 per cent paraffin – a lubricant made of petrol or oil – had been thought to be safe in the past, while those with more already had fire warnings.

But testing has now found even creams with no paraffin at all can build up in fabrics and make them quicker to burn in a fire.

Today’s warning revealed creams containing little or no paraffin can be soaked up by fabrics and make them flammable, after years of warnings those with paraffin carry the greatest risk.

Figures last year showed at least 37 deaths were linked to the creams between 2010 and 2017.

But fire experts fear the link is underreported and senior firefighter and member of the National Fire Chiefs Council, Chris Bell, said the death toll could be in the hundreds.

‘Hundreds of thousands of people use them, we’re not sure how many fire deaths might have occurred but it could be into the hundreds,’ he told the BBC in February.

‘Unfortunately, that cream can get into fabrics, clothing, bandages and dressings, and become flammable.

‘The creams are safe to use in their own right, but if that person is exposed to a naked flame or some other heat source, they can go up.’

Flaming clothes, bedding or wound dressings can cause severe burns and even death when in contact with large areas of the body.

Washing the fabrics can rinse out some of the build-up and make them less flammable but will not completely remove the risk, the MHRA said.

The government body now wants warning labels on the creams and for people selling and buying the moisturisers to be made aware of the dangers.

Chris Bell, a senior fireman in West Yorkshire and member of the National Fire Chiefs Council, said: ‘We welcome this recommendation.

‘There have now been in excess of 50 deaths in the UK where the build-up of emollients on bedding, dressings or clothing may have contributed to the speed and intensity of the fire.

‘Many of these fires were caused by people who smoked and were unaware of the fire risks associated with emollient build-up on fabrics.

‘We have been trying to raise awareness about this issue with the public and health and care professionals.

‘Ensuring that these products carry warnings will certainly help us as we continue to work with pharmacists, the NHS and care sector to prevent any future deaths.’

The MHRA wants full text and picture warnings for people using the creams not to smoke or go near naked flames when wearing potentially affected clothes.

Patient information and instruction leaflets should also contain detailed warnings about the burn risk and how best to minimise it.