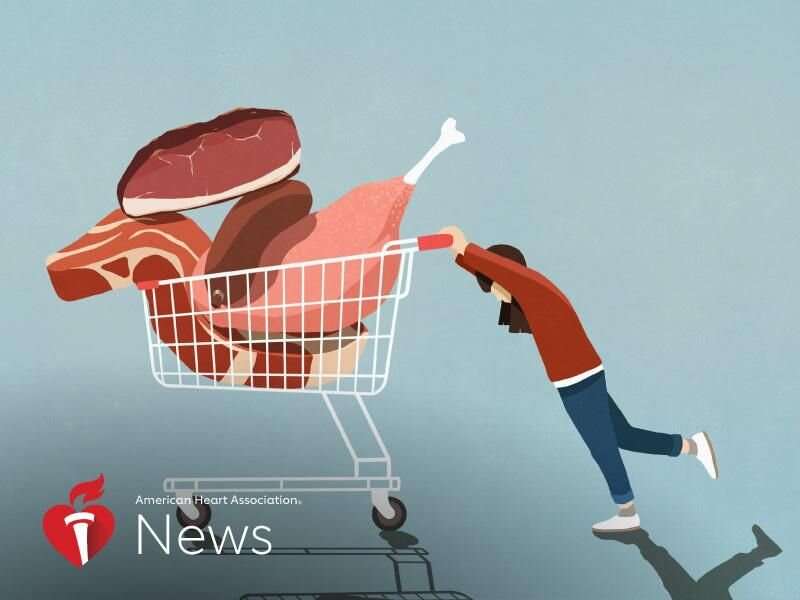 Eating too much food containing sulfur amino acids—primarily found in proteins such as beef, chicken and dairy—may increase a person’s risk of cardiovascular disease and death, according to new preliminary research.

Sulfur amino acids are essential for metabolism and overall health, but the average person in the United States consumes far more than needed—as much as two and a half times the estimated average requirement.

“This may provide part of the reason why people who consume diets that emphasize healthy plant foods have lower rates of cardiovascular disease than those who eat large amounts of meat and dairy foods,” said Laila Al-Shaar, an assistant professor of epidemiology at Penn State University College of Medicine in Hershey, Pennsylvania. She led the study presented Thursday at the American Heart Association’s Epidemiology and Prevention, Lifestyle and Cardiometabolic Health conference in Chicago.

On average, participants ate more than twice the recommended daily amount of sulfur amino acids, mostly from beef, chicken and milk. After adjusting for other cardiac risk factors, the researchers found that, compared to those who ate the least, those who consumed the most sulfur amino acids had a 12% increased annual risk of developing cardiovascular disease and a 28% increased risk of dying from the condition over the 32-year study period. The results are considered preliminary until the full findings are published in a peer-reviewed journal.

The vast majority—at least 94% – of the participants were non-Hispanic white men and women, and because they were health professionals, their socioeconomic status may not represent the overall population. This means the results might not be generalizable to other groups, Al-Shaar said. So, other studies should include populations with different dietary behaviors, specifically those whose protein intake is primarily from plant sources, she said.

Several animal studies in the past few decades have shown that restricting these types of amino acids—notably methionine and cysteine—delayed the aging process and helped animals live longer, but translating those benefits to people has proven to be difficult.

A study from the same Penn State research group published in The Lancet’s eClinicalMedicine journal in 2020 linked higher consumption of sulfur amino acids to higher cardiometabolic disease risk. But it was based on estimated diets from participants filling out just one or two questionnaires about their diets during the previous 24 hours. This new research builds on that work, with the advantage of using long-term diet data assessed by repeated food frequency questionnaires and health outcome data.

It also builds on a study Al-Shaar led as a postdoctoral research fellow in the Harvard T.H. Chan School of Public Health in Boston. Published in the BMJ in 2020, it suggested that substituting high-quality plant foods such as legumes, nuts or soy for red meat might reduce coronary heart disease risk in men.

Al-Shaar said people can get their estimated average requirement of sulfur amino acids—15 milligrams per kilogram of body weight per day—through plant-based sources or fish. For a 150-pound adult, for instance, that would mean 1 cup of tofu and 1 cup of lentils a day. It can be also met through consuming a 3-ounce fillet of tuna.

“Since red meat has been found to be associated with worse health outcomes,” she said, “it would be better to focus on healthier sources of proteins for meeting the average requirement of sulfur amino acids.”

The new research adds focus to the overall way adults eat in the U.S. and highlights that a healthy diet should incorporate more fruits and vegetables, said Judith Wylie-Rosett, a professor of epidemiology and population health at Albert Einstein College of Medicine in New York.

“We all need to look at dietary patterns because the American dietary pattern is far from the recommendations,” said Wylie-Rosett, who was not involved in the study. “But this study doesn’t give evidence that we should be focusing only on those two amino acids.”

The study also fits in with current research about metabolism and specific biomarkers, known as “metabolomics,” a tool that supports precision medicine tailored to a specific patient.